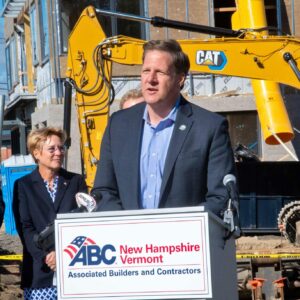 Sununu to Voters: Frustrated With the Economy? Blame Democrats.

A new poll from Suffolk University released Thursday found Gov. Chris Sununu with a significant 53-36 percent lead over his Democratic challenger, state Sen. Tom Sherman. However, it also found more than half of Granite Staters rate the economy as either “fair” or “poor.” Only seven percent rate it as “excellent.”

Asked about voters’ frustration with the current economy and whether they should lay part of the blame on the three-term Republican governor, Sununu said the problem was in Washington, D.C., not Concord.

“Voters are frustrated with inflation. That’s a national issue. They’re frustrated with higher electricity prices hitting all of New England, with gasoline prices, which is a national issue. When it costs twice as much to fill your tank, when it costs twice as much for fuel to generate electricity, that’s from national policy. And New Hampshire voters discern that.

“Which is why I think the Democrats in the federal seats are going to be in real trouble in November,” Sununu added.

Sununu made his comments at a construction site in Manchester where he received the endorsement of the Associated Builders and Contractors of New Hampshire and Vermont (ABC), which represents more than 21,000 members.

“Gov. Sununu’s pro-free-enterprise and pro-economic prosperity agenda has helped make New Hampshire the envy of the rest of the country,” said Joshua Reap, president and CEO of ABC. “We’re on the move, and a lot of that is attributed to the policies he’s put in place.”

Sununu was clearly in his element, answering questions about the economy and talking about the power of the state’s executive branch to impact policy issues like promoting more housing construction.

At the same time, Sununu acknowledged the problem of a lack of housing in the state, in part due to reluctance by local communities to allow new construction. Asked who is winning the fight right now, the “NIMBY’S” (Not In My Back Yard) or the employers who need workforce housing, Sununu said the state is helping to minimize resistance to new housing investments.

“One thing we’ve done is create a housing appeals board at the state level so projects that were unfairly sidelined at the local level have another shot, make sure the rules are being followed,” Sununu said. He also touted his new InvestNH program, which helps cover some of the costs local governments face from new housing construction, “to incentivize them to move quickly.”

Asked about New Hampshire’s high energy costs and what they mean to new construction and the economy, Sununu had a concise answer:

And like the inflation problem, Sununu pointed to the policies of the Biden administration as the source of the problem.

“New England’s high energy costs — and Massachusetts’ are now higher than ours — this is a New England problem. You need the backbone of the electricity grid as a whole,” Sununu said. “This administration has disincentivized additional production, particularly out of the Marcellus shale. So as demand may go up on really cold days this winter, and we need a stronger draw out of that natural gas, the production won’t necessarily increase to match that demand. This is a real problem.”

Apparently Rep. Chris Pappas agrees. A longtime opponent of increased fossil fuel production and expanding infrastructure like pipelines (he supported shutting down the Keystone XL pipeline), Pappas told WGIR radio Wednesday he now sees the lack of pipelines to the area as a problem.

“We know we don’t have adequate pipeline capacity in New Hampshire to meet the needs of our state’s businesses, that’s been a long-standing challenge,” Pappas said. “And we need to do permitting reform in a way that will speed these [energy] transmission policies along,” he added.

Reap said high energy costs are a major hurdle for the housing and construction industry.

“I think we can get better leadership out of Washington, but that’s a different conversation,” Reap said. “We would call on all our leaders to fix the systemic problem of our energy infrastructure.”

The bottom line, Sununu said after the event was over, “You can’t demand a change out of Washington and keep sending the same people back.”