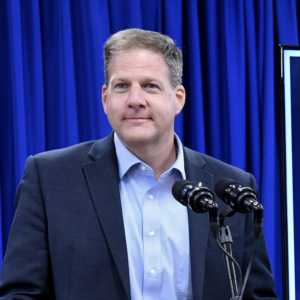 Gov. Chris Sununu came under fire from pro-abortion activists after saying he’d be willing to sign a state budget that includes a ban on abortions after 24 weeks of pregnancy.

“I’m a pro-choice governor, but like most citizens of the state of New Hampshire, I do not think that we should be doing late-term, at the very last minute type abortions,” Sununu told WGIR radio Thursday morning. “That’s all this [amendment] really touches upon. I think most people agree that’s not appropriate. So no, I wouldn’t necessarily veto a budget over that.”

And, Sununu added, “I think fundamentally, most people agree that those types of late-term abortions are not appropriate. And even most pro-choice people agree with that as well.”

Legislation that would limit abortions to the first 24 weeks of pregnancy with an exception for medical emergencies is making its way through the GOP-controlled legislature and some version is very likely to be included in the state budget. New Hampshire is one of six states without a line-item veto, so Sununu would be faced with either vetoing the entire budget or accepting the 24-week ban.

“I’m glad the governor’s made his position known because he’s waffled quite a bit on this important issue,” said Sen. Donna Soucy (D-Concord), the top-ranking Democrat in the state Senate. “Either you support the right of individuals to make choices about their own healthcare, or you don’t. It’s that fundamental.”

Multiple polls by multiple pollsters have found Americans who identify themselves as pro-choice also oppose late-term abortion. That’s certainly true in New Hampshire, where a majority consistently tell pollsters that, like Sununu, they consider themselves pro-choice, but they also oppose the Democrats’ position of unrestricted abortion on demand through all nine months of pregnancy.

For example, a March 2021 Granite State Poll conducted by the UNH Survey Center, found 48 percent of voters supporting the 24-week limit, and just 40 percent opposed. Among independents, that breakdown was 57 percent in support, 27 percent opposed.

The poll also found 58 percent of Granite Staters support some restrictions on abortion, as opposed to just 38 percent who share the Democrats’ position.

Sununu’s office issued a statement pushing back on Democrats’ claims that he had forfeited his pro-choice bona fides.

“The governor is pro-choice and supports a women’s right to choose. Any insinuation this bill would outright ban abortion in New Hampshire is patently false and something the governor would never support. Like a plurality of NH citizens and as the governor has stated for years, he supports a ban on late-term abortion,” the statement read.

Democrats are pointing to a Facebook Live interview during the 2020 gubernatorial campaign in which Sununu said he “wasn’t looking to make any changes” in the state’s abortion laws as proof Sununu has flip-flopped on the issue.

“When asked in the Facebook live conversation, Gov, Sununu said he was not looking to make any changes to New Hampshire’s laws, and to be clear – he did not propose this legislative amendment. But as he said this morning, he’s not going to veto an entire state budget over a change that would bring NH in line with 43 other states, and any claim that this is a radical restriction is just partisan politics.”

Democrats, and some Republicans, tell NHJournal they see Sununu’s stance as a sign he plans to challenge first-term U.S. Sen. Maggie Hassan next year and is hoping to energize the GOP base. NHGOP insiders close to Sununu say that’s nonsense.

“He’s at 80 percent favorable with Republicans and his job approval is 90 percent. Why the [expletive] does he need to talk about abortion?” one NHGOP strategist told NHJournal.

Hassan, on the other hand, has embraced the extreme, unrestricted abortion policy of her party. According to Gallup, just 13 percent of Americans support that position. And by declaring Sununu’s position not acceptably “pro-choice,” Democrats are potentially driving a wedge between the moderate majority and their own candidates on this issue.

Abortion politics are not a hot-button issue in New Hampshire. Failed Democratic gubernatorial nominee Dan Feltes dedicated weeks of his campaign to what he euphemistically called “women’s health,” and he lost in a 30+ point landslide the same night Democrat Joe Biden carried the state by seven.

Democrats may believe abortion is an issue that can hurt Sununu’s prospects in a U.S. Senate race, but as long as the issue is late-term abortion, the data show he’s got the voters on his side.