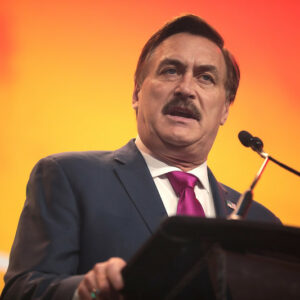 My Pillow CEO Mike Lindell may be a rock star on the fringe right, but Gov. Chris Sununu tells NHJournal he is not impressed.

“New Hampshire isn’t interested in debunked political conspiracy theories from some infomercial guy. Our citizens can sleep easy knowing that our elections were safe, secure, reliable, and accurate – just as they are every year,” Sununu said Monday.

That stands in stark contrast to Lindell, who claims the Granite State presidential election was stolen by Chinese computer hackers and corrupted vote-counting machines that switched more than 50,000 votes.

Lindell, best known for his non-stop TV ads on Fox News and out-there theories about COVID-19 and the 2020 election, is bringing his conspiracy roadshow to Manchester’s Doubletree Hotel Wednesday morning. The New Hampshire state House of Representatives will convene at the same hotel, due to COVID concerns, that morning.

According to an email sent by state Rep. Susan Homola (R-Hollis), legislators and town officials are invited to “a presentation on the latest tools, techniques, and technology advancements in election security. This presentation is being hosted by Mike Lindell, and it is intended to be a forward-looking discussion on emerging election methods and supporting hardware.”

Homola declined to respond to multiple requests for comment, nor would she name any local organizers or participants. For a social media savvy figure like Lindell, there are virtually no mentions of the upcoming event, which is not open to the public.

Lindell, who is facing multiple lawsuits for his outlandish claims about voting machine companies, remains adamant that Donald Trump won a major popular vote victory in 2020, despite the available evidence to the contrary.

This won’t be the first time Lindell’s pitched his view of American politics in the Granite State.

“China picked our winners” in the 2020 election, Lindell told the group 603 Alliance during a speech in Manchester last August. “Everybody knows it — 100 percent this election was stolen,” Lindell said. “It was stolen by machines,” he added. “There had to be some kind of algorithm because it went across all states.”

And yes that includes New Hampshire’s election which, despite the work of then-Sec. of State Bill Gardner, Lindell claims was stolen by the Chinese Communist Party. Lindell declared that rather than losing the state by eight points (425,000 t0 366,000), Trump won the Granite State, 410,000 to 375,000 votes.

“He crushed New Hampshire, he crushed it,” Lindell claimed.

Lindell’s latest project is making pillows for the truck drivers protesting in Canada.

“All of our employees are busy making pillows right now for the truckers in Canada,” Lindell told an interviewer over the weekend. “We’re going to try and get them through. I’m not going to say what day or you know there will be obstructionists.”