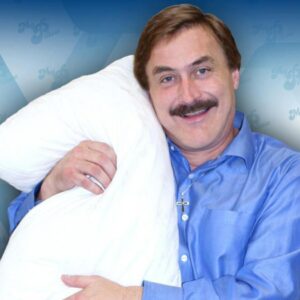 Mike Lindell, well known among Fox News viewers as the “My Pillow guy,” is one of the most vocal proponents of the unfounded 2020 election-fraud conspiracy popular among fringe elements of the political Right. And he is bringing his election-security roadshow to Manchester just in time for Wednesday’s legislative session.

In an email to her state House and Senate colleagues, Rep. Susan Homola (R-Hollis) writes:

“You are invited to a presentation on the latest tools, techniques, and technology advancements in election security. This presentation is being hosted by Mike Lindell, and it is intended to be a forward-looking discussion on emerging election methods and supporting hardware. ”

The event is scheduled for Wednesday afternoon in the Doubletree Hotel, where the legislature will be holding its session due to COVID-19 concerns.

Homola says the event is not open to the public and that she is not “not coordinating Mr. Lindell’s visit or this presentation.”

Lindell, who has earned millions hawking pillows, towels, and slippers on cable TV, has also spent an estimated $25 million hawking tales of election fraud, many of them disproven.

For example, Lindell issued a “report” to the Idaho Secretary of State which he claimed “proved” votes for Trump in all 44 state counties were electronically switched to Biden. But “at least seven counties in the state don’t use electronics at any point in their vote-counting process,” the state agency reported.

Lindell has also been pushing the theory that 40,000 ballots were flown into Arizona from Asia, leading to a search for bamboo in the ballot paper in Maricopa County. (None was found.)

Just last week, Lindell told an interviewer, “It’s so amazing, all the things that we have. We have all the pieces of the puzzle. You talk about evidence. We have enough evidence to put everyone in prison for life, 300 and some million people, we have that back all the way to November and December.”

As of this publication date, Lindell has not made public his evidence of wrongdoing by 300 million people. (There are only about 110 million registered Democrats in the U.S.)

What Lindell does have are multiple lawsuits demanding millions in damages for allegedly defaming voting machine companies like Smartmatic and Dominion for making evidence-free claims they participated in a shadowy, international conspiracy to steal the 2020 election from Donald Trump.

Pence received an outpouring of support from Republicans, according to reports.

Closer to home, legislation proposed by state Rep. Tim Baxter (R-Seabrook) calling for a forensic audit of the 2020 election was voted down unanimously in the GOP-controlled House Election Law committee, 19-0. Baxter’s bid for U.S. Congress, which is largely based on his embrace of Trump’s election conspiracy, has yet to catch fire with NHGOP primary voters.