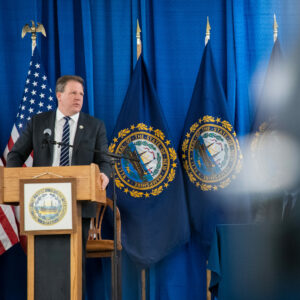 Gov. Chris Sununu joined 24 of his fellow GOP governors with a message to President Biden regarding U.S. energy policy:

It’s time for a change.

“As governors, we call on President Biden to reverse his policies and restore America’s energy independence for our citizens as well as our allies abroad,” the governors wrote Friday. “By removing his bans on new oil and gas development on federal lands, building the Keystone XL pipeline, and reinstating regulatory reforms to streamline energy permitting, we can protect our national energy security and sell to our friends rather than buy from our enemies—specifically Russia.

“Family budgets have already been stretched thin following record inflation. People in our states cannot afford another spike at the gas pump, and our allies cannot afford to be held hostage by Putin’s tyranny and aggression.”

The politics of Putin’s invasion have echoed into New Hampshire, where Republicans are adding higher fuel prices from Biden’s energy policy to the pre-existing inflation problem. Democrats like Sen. Maggie Hassan and Rep. Chris Pappas, who’ve repeated standard Democratic rhetoric on climate change and opposing fossil fuels in the past, have been forced to reverse their positions in embarrassing, high-profile pivots.

None of the New Hampshire Democrats contacted by NHJournal were willing to respond to the GOP Governor’s critique of Democratic energy policy. In Washington, D.C., some moderate Democrats are joining Republican calls for more oil and gas development.

“As a nation, we must commit to once again achieving complete energy independence by embracing an all-of-the-above energy policy to ensure that the American people have reliable, dependable and affordable power without disregarding our climate responsibilities,” Manchin said.

While no Granite State Democrats have spoken out against their party’s move toward more fossil fuel production, at the national level there are still progressives prepared to push back.

“Those who are arguing that we should instead invest in more fossil infrastructure are either evil or stupid,” said Rep. Sean Casten (D-Ill.).

And while Speaker of the House Nancy Pelosi called for an end to Russian oil imports (“Ban it. Ban oil from Russia,” she said Thursday), she also opposes expanding U.S. production.

Sununu and his fellow Republicans appear to be on the same page as the voters, if recent polls are any indication. A new Morning Consult poll found 90 percent of Americans supported the U.S. developing its own domestic sources of energy rather than relying on foreign production. That’s problematic for Democrats supporting President Biden and his public pleas for foreign nations to increase oil and gas output.