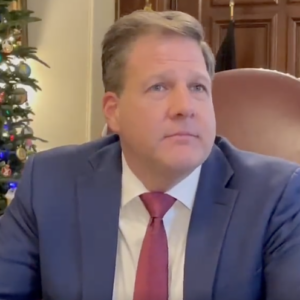 In a wide-ranging conversation on Organization Day, Gov. Chris Sununu said the blame for the Democratic National Committee’s assault on New Hampshire’s First in the Nation presidential primary belongs at the feet of the state’s federal delegation. And he said he plans to get involved in the state GOP’s process of picking new party leaders.

President Joe Biden last week dropped a bombshell primary calendar on the DNC’s Rules and Bylaws Committee that gave South Carolina the #FITN and pushed New Hampshire into the second spot, on the same day as Nevada. The committee quickly passed Biden’s plan and the full DNC is expected to do the same next month.

Asked if Sen. Jeanne Shaheen and her fellow Democrats in the federal delegation had done enough to protect the primary, Sununu was blunt. “Cleary not, clearly they blew it. They’re the Democratic delegation, they’re in charge of the pitch and they clearly blew it. The delegation as a whole did a terrible job.”

To accommodate the Democrats, New Hampshire would have to change its state law requiring its primary to be held at least seven days before any similar contest. And the DNC went even further, demanding Sununu and legislative leaders sign a letter pledging to add early voting and other election policies Democrats support.

Sununu described the request as “dead on arrival.”

“It’s an outrageous request to think that the Democrat National Committee is going to dictate our laws and our process,” Sununu said. “And the only reason they are trying to take this from us is because of the personal whims of a candidate, Joe Biden. They are allowing a candidate to decide where to put the First in the Nation primary, as personal political payback to his supporters in South Carolina.

The Republican governor made his comments just before the legislature elected David Scanlan secretary of state, with some two dozen Democrats rejecting their party’s nominee, former state Sen. Melanie Levesque. In an interview with Drew Cline on WFEA radio Thursday morning, Sununu praised the legislature’s decision.

“Having a Democratic operative [Levesque] take over right when the Democrats are trying to kill our primary; you’re basically handing the process to the DNC. It would have been a joke.”

In Wednesday’s press conference, Sununu was also asked if he planned to weigh in on the coming leadership fight for the GOP state party. Republican National Committeeman Chris Ager, who has crossed political swords with Sununu in the past, is the only announced candidate for chairman, while two candidates — failed U.S. Senate candidate Don Bolduc and Board of Education member Ryan Terrell — have announced for the vice chair job.

“I’ll absolutely weigh in. There’s too much at stake,” Sununu said. When a reporter jokingly asked if that meant he would be endorsing Bolduc, Sununu replied, “Not going to happen.” He added that he expected more candidates to get into the leadership contests.

Sununu used the topic to reiterate his case that the New Hampshire GOP needs more mainstream candidates who focus on winning general elections, not just primaries. “Winning in November — last time I checked, that’s all that matters. I think this last election showed that,” Sununu said.

“When it comes to what is effective and how to win in this state for Republicans, I think I’ve proven I know what I’m doing,” Sununu added, and he said his party’s problem is nominating “extreme candidates, or candidates who look very favorable to the base, but who don’t really click with the independents, with the purpleness of our state.”

“When it comes to party politics, you gotta close the deal in November.”