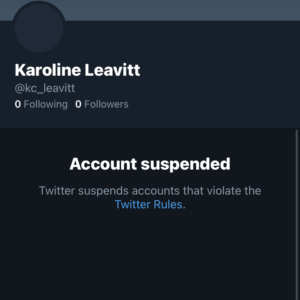 Congressional staffer and New Hampshire native Karoline Leavitt woke up Thursday morning to the unpleasant news that she had been blocked by Twitter overnight. The timing could hardly be worse: Leavitt is the spokesperson for Rep. Elise Stefanik (R-N.Y.) who’s currently in the middle of one of the biggest political fights in Washington.

GOP congressional leaders have announced they intend to remove Rep. Liz Cheney (R-Wy.) from her post as chairwoman of the House Republican Conference, the #3 spot in leadership. Several high-profile members are supporting Stefanik for the job. It’s front-page news in Washington, which is why Leavitt’s Twitter ban was such a big problem.

Leavitt told NHJournal she received no notice of the suspension, nor was she given any reason for it.

“I worked close to a 20 hour day Wednesday — for obvious reasons — and I was winding down late last night on Twitter. I sent a tweet about Rep. Stefanik appearing on Steve Bannon’s podcast, and I also tweeted out a message from President Trump. I guess that’s enough for Twitter’s algorithm to shut down your account,” Leavitt said.

Her lockdown came just hours after the Atkinson, N.H. native and Central Catholic High grad had spoken via Zoom from D.C. to the Rockingham County GOP, and an article about her appearance amid the GOP v. Cheney battle appeared at NHJournal.

The Rockingham GOP promptly responded to the news of Leavitt’s suspension with a hashtag: #FreeKaroline

“Outrageous! Hours after Karoline Leavitt spoke before RCRC, she finds her Twitter account shut down by the state big tech censors.” they tweeted.

NHJournal reached out to Twitter for comment on their decision to pull Leavitt’s account, and soon after her service was restored. However, according to Richard Torrenzano of The Torrenzano Group, a reputation and high-stakes issues management firm, the damage has already been done.

“When a person is taken down from a platform, many people will assume they did something wrong. That’s unfortunate, but it’s the way our society is,” said Torrenzano, author of the book “Digital Assassination: Protecting Your Reputation, Brand, or Business Against Online Attacks.”

“And unlike a court ruling where you can appeal the decision, there is almost never any recourse for someone like [Leavitt] with these big tech companies. No one should be shut down by the tech giants. It’s a clear attack on our civil liberties and I’m disheartened that Congress hasn’t acted.”

Leavitt says she was eventually contacted by Twitter and told her suspension was a “mistake.” But she isn’t prepared to let the left-leaning tech company off that easily.

“Republicans have been screaming from the rooftops for months that if Big Tech can silence the president of the United States, they can silence you,” Leavitt said. “This is a perfect example of their tyrannical censorship, as they fundamentally believe conservatives do not belong in the public square.”