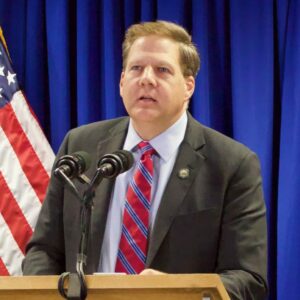 New Hampshire Gov. Chris Sununu has fired a shot in the fight over Russia’s invasion of Ukraine — literally.

The Granite State Republican has ordered the state-run liquor store system to pull Russian vodka and other libations from its store shelves.

“We’re taking all Russian products, whether they’re branded or made in Russia, we’re taking all of them out of our state liquor stores,” Sununu told NHJournal Saturday. 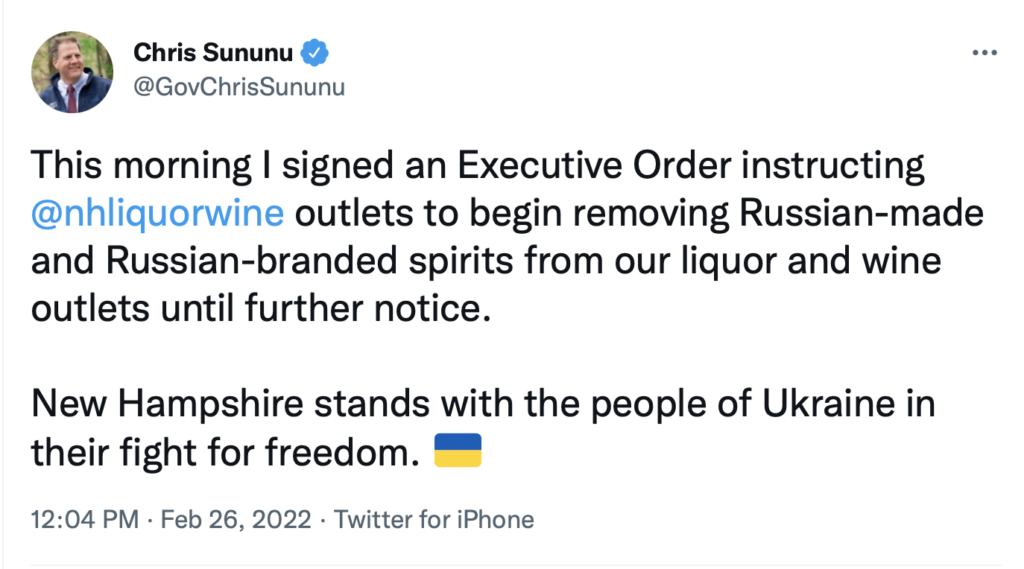 New Hampshire is one of seventeen states where alcohol sales are directly controlled by the government. The New Hampshire Liquor Commission (NHLC) “regulates the manufacture, importation, warehousing, and sale of alcoholic beverages,” according to the National Alcohol Beverage Control Association. “The NHLC is a wholesaler and retailer for all wine and spirits. It is the sole retailer of spirits in New Hampshire.”

There are 67 Liquor and Wine Outlets in the state.

“New Hampshire runs all the liquor stores here in the state,” Sununu said. “We sell all the product back through into the grocery stores and, and that’s all coming off [the shelves].

Sununu acknowledged that his move is “a little bit symbolic,” but he added that there is a financial aspect as well.

“It’s what we can do to stand with the folks of Ukraine who’ve been thrown into a war they didn’t ask for.”

It doesn’t hurt that New Hampshire has consistently been ranked one of the hardest-drinking states in the U.S., consuming close to five gallons of alcohol per person every year.

Sununu’s announcement was met with widespread support on social media, with thousands of “likes” and retweets in just a few hours. It was also picked up by national press outlets like Fox News.

“I think what we’re seeing in Ukraine has touched everybody,” Sununu said. And Russia’s invasion has certainly sparked a negative reaction across the. Granite State.

On the New Hampshire seacoast, Portsmouth’s Democratic Mayor noted his city’s Memorial Bridge was illuminated in yellow and blue lights in support of Ukraine Friday night. And members of the Protection of the Blessed Virgin Mary Ukrainian Catholic Church in Manchester have been speaking out on behalf of the war-torn nation. 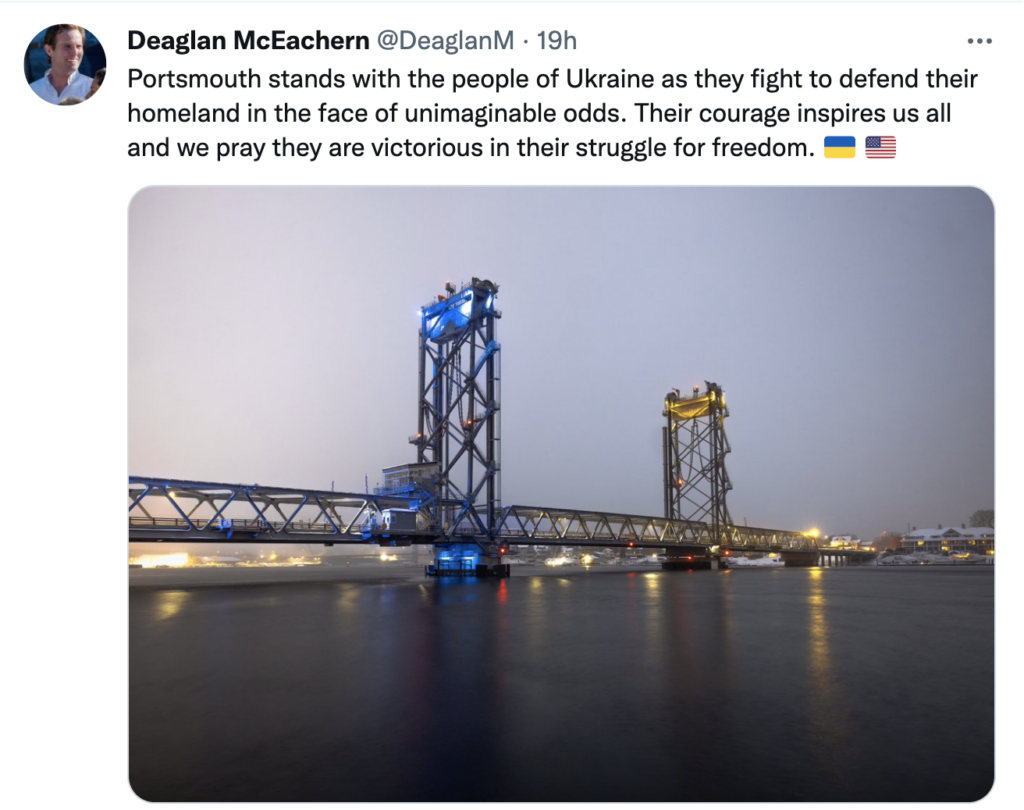 Sununu was heavily recruited to challenge Democrat Sen. Maggie Hassan this year (he chose to run for re-election instead), and he’s made no secret of his interest in possibly running for president one day. Asked what he believes Washington’s stance should be toward Russia’s actions, Sununu urged strength and rejected isolationism.

“I think we have to be absolutely unwavering, we should stand firm,” Sununu said. “I support President Biden’s efforts on the sanctions, and if there’s a way to go even further with that, I think we should.

“It’s not time for politics,” Sununu added. “We have more freedom than anywhere else, and anything we can do to support that kind of freedom across the world, we have to be part of it. We can’t be isolationists.”

Sununu’s announcement isn’t the first time the state’s liquor system has played a role in politics beyond the bar glasses. The governor made national headlines last month when he announced his plan to sell one million COVID-19 rapid tests at cost in the state’s liquor stores. The “shot and a swab” system, some named it.

And perhaps the most notorious political moment for the state-run liquor system was in 1976. Republican Gov. Mel Thomson, tired of Massachusetts’ tax agents harassing Bay State shoppers who’d come across the border to buy New Hampshire’s cheap booze, struck back. He threatened to station state troopers at the border liquor stores to confront the interlopers.

The agents, he said, will be questioned, photographed, and asked to produce identification.

In some small way, Sununu said, he hopes New Hampshire’s efforts can help do the same.

“Push those Russians back to Moscow where they belong,” Sununu said.