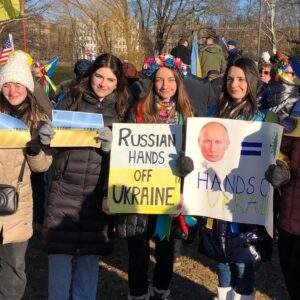 A protest against Russia's invasion of Ukraine held in Boston, Mass. on February 21, 2022.
News

With a midterm election approaching, it’s no surprise Russia’s actions in Ukraine and President Biden’s reaction have become political issues. But for some people in New Hampshire, it’s personal.

“There is absolutely no justification for what Putin is subjecting peace-loving Ukrainians to,” said Christina Pasicznyk Vogel of the Protection of the Blessed Virgin Mary Ukrainian Catholic Church in Manchester. “His blatant aggression is unfounded and is a direct threat to democracy around the world.”

In comments to New Hampshire Journal, Vogel lamented what she sees as a lack of resolve by the U.S. and the West.

“To world leaders, we plead:  If this is not an invasion of Russia in Ukraine, what is? If we do not enact heavy sanctions now, when will we? What message are we sending Putin if we do not respond now with the ‘swift and severe’ sanctions as stated by Kamala Harris in Germany just a few days ago?

“All free nations must stand together, implementing swift and severe sanctions, and put an end to his war on Ukraine. Because he is patient and will take chunks of Ukraine, a little at a time the same way Hitler and Stalin did,” Vogel said. “When will this end?”

That view was echoed, to varying degrees, by Granite State politicians and candidates.

“Ukraine is a sovereign, democratic nation, and the United States and our allies will not tolerate Vladimir Putin’s foolhardy attempts to rebuild a Soviet empire,” said Sen. Maggie Hassan (D). “Despite Putin’s rhetoric, his invasion of Ukraine is a grave miscalculation and will be met with crippling consequences for Russia and its economy.

“The Biden administration’s latest actions are part of a united response with our allies, including Germany’s step to halt Nord Stream 2, preventing Russia from accessing the European markets it so desperately needs to keep its economy afloat. We must continue to make clear to Putin that the cost of further aggression is more than he or the people of Russia can possibly stand.”

Her fellow Democrat, Rep. Chris Pappas, who also faces a tough re-election fight in November, had a similar view.

“Vladimir Putin’s invasion in Ukraine must be strongly condemned and met with swift and severe consequences from the United States and our NATO allies,” Pappas said. “As I’ve said before, Vladimir Putin is a bully, an autocrat, and seeks to spread his malign influence further west. The international community must stand united against him. I urge the Biden Administration to respond with appropriately harsh sanctions and to make clear that the invasion of Ukraine or any sovereign territory by Russia will not be tolerated and will result in debilitating economic repercussions and further isolation from the international community.”

New Hampshire’s senior Sen. Jeanne Shaheen issued a statement from Poland, where she is talking to U.S. allies and participated in the recent Munich Security Conference.

“Vladimir Putin’s illegal annexation of the Donetsk and Luhansk regions of Ukraine must be met with fierce condemnation from the global community and a response that sends the message, without equivocation, that NATO, the West and democracies around the world will not sit by while Putin wages war on Ukraine. The administration should utilize the tools at its disposal and levy severe sanctions today,” Shaheen said.

However, her words are undermined by her recent vote to block a Senate bill to impose sanctions on the Nord Stream 2 pipeline. Shaheen joined a Democratic filibuster to stop the sanctions measure supported by a bipartisan majority from making it out of the Senate.

Hassan joined with Republicans to back the sanctions bill.

“The Biden Administration’s war on domestic energy production as well as selling out on the Nord Stream 2 pipeline has made the U.S. and Europe beholden to Russian and OPEC nations for energy needs while funding Putin’s war machine. Biden’s warning that energy prices could rise because of the Russia invasion into Ukraine is a direct result of his actions and incompetence. We must show strength, not weakness to bullies like Putin,” Morse said.

“To USA congressmen and women, we ask that they immediately pass bills to put an end to buying Russian oil, and freeze all Russian assets in the west, among other bills currently under consideration to demonstrate support for Ukraine. We do not want to see war, nor do we want to see Ukraine lose any more territory.

“We believe heavy sanctions by all western nations provide the most peaceful way to show Putin his actions are not acceptable and will not be tolerated.”