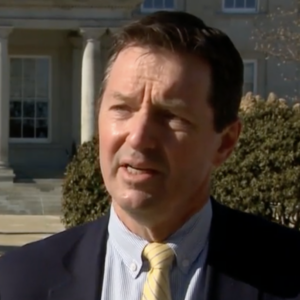 Democrat Tom Sherman says the debate over banning late-term abortions is irrelevant because they don’t happen in New Hampshire and, he says, he has seen the numbers that prove it.

Only one problem: Those numbers apparently don’t exist.

Sherman’s following his party’s campaign messaging: Abortion, abortion, abortion. Democrats are focusing their TV ads on incumbent Gov. Chris Sununu signing a late-term abortion ban into law as part of the 2021 budget. The measure allows abortion for any reason for the first six months of pregnancy — well past viability — and also includes exceptions to protect the life of the mother in the last trimester.

Sherman, who opposes the 24-week limit as too restrictive, was asked by radio host Jack Heath Monday what limits, if any, on legal abortion he would support as governor. Instead of answering, Sherman argued the question was pointless because elective late-term abortions just don’t happen in the Granite State.

“There are no elective abortions performed in New Hampshire — we know this from data and testimony– after 24 weeks. In fact, it’s rare there’s anything after 14 weeks in New Hampshire,” Sherman said.

Not from state government.

“I’d like to know where he got those numbers, because the state of New Hampshire doesn’t collect that data,” said state Sen. Sharon Carson (R-Londonderry). Carson noted Democrats have repeatedly blocked efforts to require the state’s abortion providers to report basic (and anonymous) data about the procedures they conduct in the Granite State, including the number.

One of the state representatives who helped kill an effort at abortion data reporting in the House? Then-state Rep. Tom Sherman in 2014.

Sherman and his campaign declined to respond to repeated requests he identify the source of his “data.”

“Any data Sen. Sherman has seen was in his own imagination,” said Shannon McGinley with Cornerstone Action. “During the House hearings on HB 1609, DHHS confirmed specifically that there is no way for the Department to collect any abortion data from the uniform healthcare facility discharge data set, the healthcare common procedure coding system, or any other public source.

“Sen. Sherman himself cosponsored and testified for Senate Bill 399, which openly sought to legalize late-term elective abortion. During the Senate Judiciary hearing on that bill, Sherman and his allies made no secret of the fact that they were seeking to authorize abortion until the child’s head crowns for any reason,” McGinley added.

The Guttmacher Institute, one of the leading pro-abortion data sources in the world, does release estimates of the number of abortions per state. However, a spokesperson for the organization acknowledged to NHJournal that it gathers its data directly from abortion providers, not government agencies, and the voluntary reporting is incomplete. Using surveys and public data, the group estimates 2,050 abortions were performed in the Granite State in 2020.

Using the national average, about 25 of those would have been late-term abortions.

New Hampshire’s 24-week restriction is supported by about 70 percent of Granite Staters who tell pollsters it is the right limit or should be tightened even further. Just 30 percent say they support Sherman’s abortion-without-limits stance.

And, Republican supporters of the late-term abortion ban ask, if they don’t ever happen, what is Sherman’s objection?

“If there are no late-term abortions, then why fight so hard against restricting it to 24 weeks?” asked Sen. Regina Birdsell (R-Derry).

“The conduct of progressives shows Sherman’s claim is not true. Progressive groups spent millions of dollars in New Hampshire specifically to legalize elective abortion after six months. With that money, they could have paid for over ten thousand breast cancer screenings. According to Sen. Sherman, all this money was wasted defending a practice that does not exist. Meanwhile, these same people conveniently oppose any legal changes that would let us investigate their claim.”

Democrats show no sign of hitting the brakes on the abortion issue. They have spent millions of dollars referring to the state’s late-term abortion ban as “Sununu’s abortion ban,” with “no exceptions for rape or incest.” That appears to be an attempt to confuse voters, given that victims of rape or incest have six months to choose an abortion, just like any other woman.

And Democrats are still running debunked ads falsely claiming GOP federal candidates Don Bolduc (U.S. Senate) and Karoline Leavitt (NH-01) support a “national abortion ban.” Both Republicans have repeatedly said for months they support the U.S. Supreme Court’s decision that sent the issue back to the states, where they believe abortion should be regulated.

Will it work? A new national poll from The Washington Post found voters ranked abortion relatively low on their list of priorities, behind inflation, the economy, education, crime, and the border.