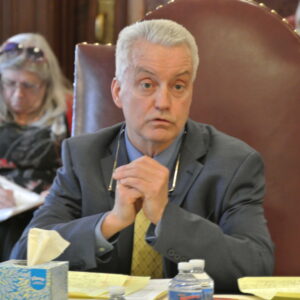 CONCORD — Judicial nominee Brian Shaughnessy recited the Serenity Prayer early in his testimony before the Executive Council on Wednesday, an apt sentiment given the rough day he had answering questions about the Bedford 2020 election snafu.

“God, grant me the serenity to accept the things I cannot change, the courage to change the things I can, and the wisdom to know the difference,” he said, explaining his life philosophy. “I try to live by those rules; they guide my life.”

Several executive councilors were less than serene about Shaughnessy’s nomination.

Councilors Cinde Warmington (D-District 2), Janet Stevens (R-District 3), and Dave Wheeler (R-District 5) hammered Shaughnessy over his role in the investigation and coverup of 190 uncast ballots found after the 2020 presidential election. Shaughnessy was a volunteer assistant town moderator during that election, having previously served six years as the town moderator.

The most contentious issue was Shaughnessy’s strategy, which he presented as legal advice, for his fellow election officials to keep the fact they had bungled the absentee ballots secret from both the public and the elected town council.

That echoes another falsehood Shaughnessy acknowledged during a town hall meeting in November when he confirmed he had told town employees they could face criminal charges themselves — perhaps even felony charges — if they told the public about the election snafu. When questioned by the town council, Shaughnessy was unable to identify any such law.

Shaughnessy’s desire to keep the election fiasco secret was so strong, he told Warmington one reason he wanted Bedford election officials to keep the details from town council members was that it could create records that could be obtained by the public through the state’s Right to Know Law.

“Anything told to the town council becomes public record,” he said.

Shaughnessy said he thought the investigation would be completed in a matter of weeks, and that would be the appropriate time to make public disclosures.

“We did not imagine it would be 11 months later that the Attorney General’s Office would complete their investigation,” he said. However, he didn’t explain why he and the other election officials continued to remain silent for nearly a year.

Warmington took Shaughnessy to task for acting as Klein and Kellar’s de facto attorney, not making any public disclosure, and not contacting the town’s attorney about the matter. The ballot problems were not made public until NH Journal broke the story.

“Did you ever have concerns that keeping this secret would undermine Bedford voters’ confidence about elections?” Warmington asked.

Stevens wanted to know why Shaughnessy, or anyone involved, didn’t at least check with the Attorney General’s Office to see if it could make some kind of statement as the weeks and months passed. Shaughnessy conceded that could have been done, but he did not want to cast blame on others.

“Had I been moderator, would it have been different? More than likely, yes. But I’m not going to put that clickbait out there. That serves no purpose,” he said. “I’m not going to throw anybody under the bus.”

According to Anne Edwards of the Attorney General’s Office, its staff “had follow-up conversations with Bedford election officials, during August and September, about the need to provide notification to the 190 voters that their absentee ballots had not been counted during the 2020 General Election.

“Bedford election officials raised concerns with this notification and asked not to notify voters,” Edwards said.

Klein testified in Shaughnessy’s favor, saying his assistant town moderator was not part of the problem, nor was he a subject of the investigation.

“He had nothing to do with any of that stuff,” Klein said.

Councilor Joe Kenney (R-District 1) did n0t mention the Bedford issue but instead asked Shaughnessy about tenant law and his resume. Councilor Ted Gatsas (R-District 4), who represents Bedford, asked no questions.

“Having somebody like Brian on the bench would be an incredible asset,” Bassett said.

The council will now likely take up Shaughnessy’s nomination at its April meeting for a vote. In the meantime, the New Hampshire Attorney General’s Office has opened a second investigation into Bedford’s ballots. In September, 10 ballots from 2020 were found in a ballot box, and that information was kept from the public until NH Journal reported the story.

The Attorney General’s Office is investigating the circumstances surrounding the handling of those 10 ballots and has reopened the investigation into the 190 ballots. Shaughnessy said he is not a subject in either investigation.

“I think that with the immediacy of how things happen, I understand how you can make the decisions that are not the best in the moment,” Warmington told Shaughnessy as she wrapped up her questions. “But keeping that secret really did a disservice to the (town) council and the public.”