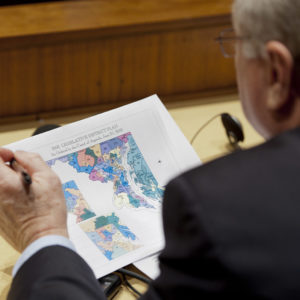 New Hampshire Democrats are demanding a nonpartisan redistricting commission. All four Democrats in the state’s federal delegation voted for the failed For the People Act that would end the right of states to draw their own congressional districts, allegedly in the name of nonpartisanship.

And the response from Granite State Republicans to Democratic demands for an end to partisan gerrymandering? You go first.

Much has been made of NHGOP Chair Steve Stepanek’s guarantee to “send a conservative Republican to Washington, D.C. as a Congressperson in 2022,” thanks to Republican control of the redistricting process. And it’s true the state’s GOP appears determined to create a First Congressional District that is heavily Republican.

But in response to complaints, they point to Democratic strongholds from Illinois to Maryland to Massachusetts, where legislators are redrawing already extremely gerrymandered maps to create even fewer potential GOP seats. Democrats in these states are more than welcome to hand the redistricting duties to independent bodies. Instead, they’re going full gerrymander.

Next door in Massachusetts, the Democratic supermajority in that state’s House of Representatives recently passed a law that would change how redistricting is handled in order to increase their already huge partisan advantage. Typically, local municipalities draw new political districts first. Only when their maps are complete does the legislature have the ability to draw its new maps. Democrats in the House flipped the script, passing a measure that would give themselves the ability to draw the maps before local municipalities had the opportunity.

The move enraged Secretary of State Bill Galvin, himself a Democrat, who equated it to a power grab while testifying against the measure, and encouraged Republican Gov. Charlie Baker to veto the bill if it ever reaches his desk.

This is in a state where more than one-third of the electorate consistently votes Republican for president and give of the last six governors have been in the GOP, but it hasn’t been able to elect a single Republican to Congress in a general election since 1994. (Scott Brown served briefly as U.S. Senator by winning a special election in 2010.)

In Illinois, Governor J.B. Pritzker signed off on new state legislative maps drawn by the Democrat supermajority in the state legislature last month, long before the Census Bureau expects final accurate population data to be available.

Pritzker, a Democrat, campaigned for governor in 2018 on the promise to enact independent commissions to draw legislative boundaries, and said he would veto any maps that were drawn by politicians. He’s abandoned that pledge.

Illinois has not yet drawn its maps on a federal level, and although the state is expected to lose one congressional seat due to population shifts a proposed map already has two Republicans expecting to get the boot. That new map would likely shift the state from thirteen Democrats and five Republicans in Congress to 14 Democrats and just three Republicans.

But no state has been more aggressive in stretching partisan gerrymandering to the extreme than Maryland,  heralded by some as “the most gerrymandered state in the union.”

In January, Republican Gov. Larry Hogan created a new independent commission to draw nonpartisan redistricting maps. The commission, made up of three Republicans, three Democrats, and three independent voters, will submit its own legislative map that does not consider past election results in its findings.

But Democrats in the legislature have already signalled their intention to ignore the commission and will submit their own partisan maps instead. Hogan will almost certainly veto it, which the Democratic supermajority is expected to override.

Currently, there are seven Democrats and only one Republican representing the state in Congress. Rep. Andy Harris, the sole Republican, is expected to be squeezed out in the new map.

Similar stories can be told in GOP-controlled states as well, of course. That’s the point: Winners draw the maps. Losers complain. But neither party is prepared to give up its partisan advantage.

“In New Hampshire, we had an election in 2020, and it was one of the largest turnout elections in state history,” said state Rep. Ross Berry (R-Manchester). “The same voters that turned out and elected Joe Biden by 8 points sent Republicans to Concord to run state government.”

And that’s what the NHGOP intends to do when it comes to redistricting — just as New Hampshire Democrats would be doing if they had the chance.