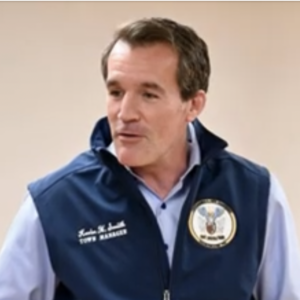 The group, Stand for New Hampshire, says it’s spending $450,000 touting Smith as the best choice to take on incumbent U.S. Senator Maggie Hassan in November. The focus of the ad is inflation, gas prices and immigration — three issues pollsters say are inflicting the most pain on President Biden and his Democratic allies.

“We expected Maggie Hassan to do something. But Maggie Hasn’t,” the ad says, echoing one of Smith’s campaign themes.

While the size of the buy is small compared to the more than $100 million likely to be spent during the course of the 2022 U.S. Senate campaign, it’s significant compared to the money raised by the GOP candidates in the primary thus far. State Senate President Chuck Morse is the top fundraiser, having collected just under $750,000 as of the end of the second quarter. Smith had raised more than $400,000 and retired Gen. Don Bolduc about $385,000.

Hassan has raised nearly $22 million, but she’s spent about $14.5 million already. And independent groups spent millions more in an attempt to bolster her image. It hasn’t worked. In the latest St. Anselm College poll, Hassan was still underwater 43-46 percent.

And the UNH Survey Center poll found that, while few Granite Staters had heard of her GOP opponents, she was still in a statistical dead heat with them in a theoretical match-up.

Recent events haven’t helped the incumbent. Gas prices have hit a new record high nearly every day this week. The stock market plunged more than 1,100 points on Wednesday as more economists see a recession looming. And there was yet another record set at the southern border as illegal immigrants surge into the country.

And it’s not just Stand for N.H. that’s spending in the Granite State. The National Republican Senatorial Committee is putting $1 million behind an ad hitting Hassan on energy prices. Once again, not a small number. But after months of sullen neglect from the national Republican Party towards New Hampshire  — a reaction, D.C. sources say, to Gov. Chris Sununu’s mishandling of his potential U.S. Senate bid — it’s a sign the party sees the opportunity to pick up a Senate seat.

The RNC’s ad, entitle “Gullible,” calls out Hassan for attempting to run as a pro-fossil fuel advocate for cheap energy and higher production. According to the ad, Hassan:

“Mitch is still mad, no doubt about it,” a DC-based Republican strategist told NHJournal, referencing Senate Minority Leader Mitch McConnell. “But with Pennsylvania potentially falling apart, they can’t afford to miss a chance at a pick up.

“This money isn’t about Morse or Smith or Bolduc. It’s about Hassan. She’s just so weak, and the news for her keeps getting worse and worse.”