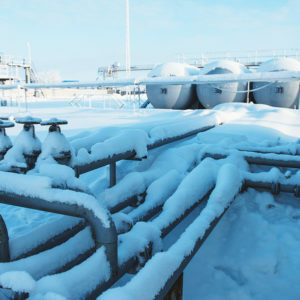 Energy sector officials have been warning for years about the risks posed to New England’s grid by plunging temperatures, risks exacerbated by anti-energy-infrastructure policies across the region.

Now with New England facing its coldest temperatures since the “polar vortex” of 2019 and wind chills of -45 degrees below zero across the U.S. northern tier states, the grid is under stress once again.

As ISO continues its work with the New England states and industry stakeholders to transition to what it considers a cleaner grid, the organization said it must also maintain real-time power system reliability.

“In recent years, oil and LNG have filled the gaps when extended periods of very cold weather have constrained natural gas pipeline supplies,” according to ISO New England’s president and CEO Gordon van Welie. “Higher prices globally for these fuels, as well as pandemic-related supply chain challenges, could limit their availability in New England if needed to produce electricity this winter.

“The region would be in a precarious position if an extended cold snap were to develop and these fuels were not available,” van Welie said.

Dan Kish of the Washington, D.C.-based Independent for Energy Research (IER) says these warnings were not sexy at the time, but people are paying attention now.

“What they pointed to was a growing gap between demand for energy and the supply that people are making available either through pipelines or electrical lines or anything else and because New England is an area of the country that does not have a lot of energy production,” says Kish. “I would be concerned based upon what the people who oversee the grid have said about it.”

“Part of the problem with the grid is the problems created by people that say we need to fix the grid,” says Kish. “The more diversity one has, the more options people have to use whatever fits those needs, and when you begin closing those down, that puts excessive strain on the grid, and that’s why the grid is running into trouble.”

Which is why New Hampshire maintains the 459 MW Merrimack Station in Bow, the last coal-burning power plant in New England. While it is seldom powered up, its owners, Granite Shore Power, make millions in capacity payments by acting as a reliable electricity backup for the grid.

Green activists have been trying unsuccessfully to shut down the Bow plant for years. Four protesters with the left-wing organization “No Coal, No Gas” were arrested Saturday after two chained themselves to a smokestack at the Bow plant.

None of the four arrested are residents of New Hampshire, according to police reports.

NHJournal reached out to organizers of the protest and asked what source of power New Hampshire should use during high-demand periods if they succeeded in getting Bow shut down.

“I recognize that the transition does not happen in one day, and the workers at the coal plant deserve options in the transition away from fossil fuels,” Rebecca Beaulieu, Communications & Youth Programs Organizer at 350 New Hampshire, told NHJournal. 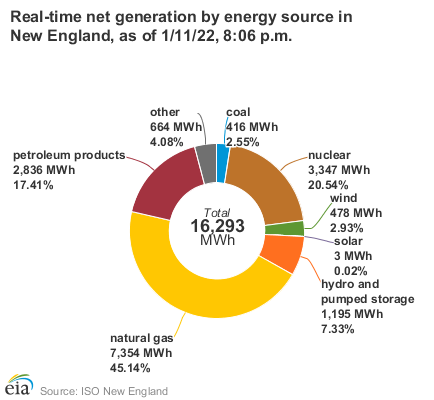 Beaulieu argues that coal provides just 3 percent or so of New England’s power, even during a peak in usage, and that three percent can be made up by renewables. “We would love to see the coal plant replaced with solar or wind energy – something that would benefit the residents of Bow and end the pollution of their air and water.”

And she’s right: On. Tuesday, ISO-New England reported just 2.55 percent of power on the grid came from coal. However, that’s about the same as wind (2.9 percent) and 100 times more than solar (o.o2 percent.) Wind and solar output would have to double to replace coal — and that’s assuming there’s not another 2019.

Meanwhile, the use of oil surges during cold periods like this one. According to the dashboard, New England was getting 17 percent of its energy from oil on Tuesday, more than hydro/wind/solar combined.

One of the stated goals of the “No Coal, No Gas” movement is to prevent the Bow plant from being converted to natural gas – despite the fact it emits about half as much carbon as coal.

“Europe right now has been going through a situation where they’re closing industries because you simply can’t make fertilizers or metal, or steel because the cost of energy has gone through the roof because they’re a few years ahead of us in this so-called green transition,” Kish said.

“So, make no mistake about it: The grid itself is actually put in peril by many of the things that they’re preaching that we ought to adopt.”