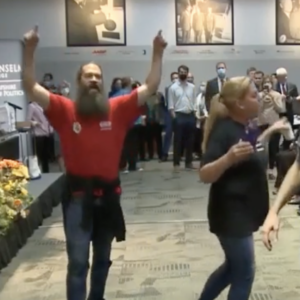 Since nobody else in New Hampshire will ask it — on the record, anyway — we will:

What the hell happened at Wednesday’s Executive Council meeting?

A handful of anti-vax loudmouths in Karen Testerman t-shirts strut around a conference room like QAnon Mick Jaggers, shouting lies and low-rent threats (“We know where you live”), and the response from our Live Free or Die leaders is …to cower out of sight? And then cancel the Executive Council meeting?

According to statements from both Gov. Chris Sununu and the commissioner of safety, they knew protests were likely and they were prepared. Really?

Then why wasn’t there an Executive Council meeting? It doesn’t take “preparation” to let yourself get chased out of your own meeting by a half dozen fanatics who failed 8th-grade biology.

There were dozens of cops on the scene, perhaps as many as 50. They’re trained professionals. If they weren’t there to maintain order and protect the functioning of our government, why have them show up at all?

And it’s not like political protesters don’t get arrested in New Hampshire. The town of Newfields wrote an anti-picketing ordinance specifically so it could arrest protesters upsetting the governor’s family by protesting near his house. The Newfields police even arrested the New Hampshire Journal reporter who was covering the protest. (The town is still pressing charges against our reporter, by the way.)

Letting protesters stomp around a suburban cul-de-sac is one thing. Letting them stop the governor and Executive Council from carrying out their duties is another. Particularly when it’s followed by the Fiscal Committee canceling its meeting, Sununu canceling a weekend appearance, and the NHIOP canceling all similar events entirely.

There’s a reason one protester shouted “Mission Accomplished!” They aren’t trying to persuade our representatives. They want to intimidate them. Cast insane, irrational votes against the vaccines — or else.

“The threats were just way too much,” Sununu told Jack Heath on his radio show Thursday morning. “Too much” for what? For you to tell the cops to grab the guy making the threat and get him out of there? For someone to actually do something other than hiding until they went away?

There’s a case to be made that, by retreating, Sununu kept events from spiraling out of hand. If police had rousted the four or five ringleaders, it’s possible the protesters would have morphed into a mob. Not likely — most of the vax-resistant are suburban moms, not street-fighting radicals — but it was possible.

Sununu’s decision to keep saying “we’ll just meet another day, the process will continue” is a strategy. It might even be the right one.

But confronting these out-of-control creeps is a strategy, too. For one thing, if the Executive Council had found the courage to at least convene on Wednesday, the crazies who tried to shout them down could have been arrested and removed for breaking a specific law. They would be making bail right now, instead of waiting for Attorney General Formella to figure out if he can find something to pin on them.

And video of obnoxious protesters being arrested for trying to stop the people’s business is valuable in and of itself. Even more so in the wake of January 6.

Yes, confrontations are risky. Something could have gone wrong. But what Sununu and the Executive Council failed to grasp was that something was already going very, very wrong. Our leaders — who speak for the vast majority of Granite Staters on the vaccine issue by the way — let some fringe radicals seize our public space. Stop our democracy. Take our power.

Once again, since nobody else will say it on the record, we will repeat what we’ve heard from many people who watch New Hampshire politics: It was embarrassing. Humiliating.

Our government — and specifically our governor — looked weak, while the strutting protesters looked like they were in charge.

Guess what? They were.

And the “Hey, it’s no big deal” press conferences and “we’ll re-schedule” rhetoric isn’t making it look any better.

All over the Live Free or Die State, angry and addled people with more Facebook memes than brains were watching what happened on Wednesday. And they’ll remember it, too, the next time they grab their protest signs and head to the next school board meeting or public hearing. If they could do this to the governor, imagine what they can do to a school superintendent.