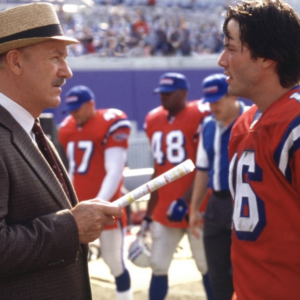 Opinion: Looking for an NH GOP Candidate Who Wants the Ball

“Winners always want the ball when the game is on the line.” — Gene Hackman as Coach Jimmy McGinty in “The Replacements”

Where are the Republican candidates who want the ball?

This will likely come as news to many Republican voters, but there are three competitive GOP primaries for federal office in New Hampshire right now. None of them have a prohibitive favorite — 2020 nominee Matt Mowers in the First District is probably the closest, and he is far from a lock — and all of them offer a legitimate-to-very-good shot at winning the general election in November.

But you wouldn’t know it from here in the cheap seats.

For weeks, NHJournal has been asking GOP primary voters, county chairs, and elected officials what they are seeing in the GOP race to take on Sen. Maggie Hassan. Answer: Not much. What about in the suddenly-competitive Second Congressional District, where Rep. Annie Kuster finds herself on the “toss-up” list?

We are less than 100 days from the November election in the best macro-political environment for Republicans since (at least) 2010. It is the political equivalent of earning the spot of jockey in a horse race that has been fixed in your favor. Ambitious GOP pols may never have this clear a shot at a U.S. House or Senate seat again.

And yet, here we are, just six weeks away from the GOP primary to seize this opportunity, and the campaigns are quieter than Hassan answering questions about backing Joe Biden in 2024. (aka, “total silence.”)

Two weeks ago, I laughed when Democratic state party chairman Ray Buckley sent out a press release demanding that the NH-01 GOP candidates debate each other more. I have seen plenty of candidates demand their opponents face them in a debate, but never one party telling another party’s candidates they should go fight each other.

In fact, NHJournal is hosting a First District GOP debate this Thursday at the New Hampshire Institute of Politics at St. Anselm College. But Buckley has a point — however unintentional.

Democrats want more fighting because they want Republicans to have a bloody, divisive, polarizing primary. Like the national Democratic Party spending millions of donor dollars on the campaigns of #StopTheSteal/Jan6 truther extremists in GOP primaries, Buckley and Co. know their candidates are weak. If the GOP can field competent challengers, Republicans have a legit chance in all of those races.

But Buckley’s complaint begs a legit question as well: Where the hell is the fight? Why aren’t these candidates going after each other like, well, political candidates? Candidates with a real chance of winning in November?

Where are the policy throwdowns? Where are the pointed attacks? Where is the candidate who looks out at this wide-open field and says, “Let me show you how good I am today, so you’ll know I’m ready to take on Hassan/Kuster/Pappas in November”?

Once again: It’s a wide-open field. This isn’t a GOP primary against Gov. Chris Sununu, or a Democratic challenge of Rep. Chris Pappas (not that New Hampshire Democrats actually run principled primaries of their own candidates, no matter how much fossil fuel money they take.)

There are three primaries, and each one is an opportunity to create a political star. But so far, it has been a blackout.

The campaigns have plenty of explanations for their low profiles, and some of them are legit. It is August. “Nobody’s paying attention,” as the saying goes. You know what, they are right. Having your primaries on September 13 is idiotic, and the only people who would support it are incumbents who see the huge advantage for themselves. (Hey, didn’t Sununu veto a bill to move that primary….)

Campaigns complain that it is tough to raise money in New Hampshire, and they are right. It is a small state full of cheapskates. That is why incumbents like Hassan and Pappas don’t even try. They ship it in from Los Angeles, Boston, and New York. GOP primary candidates have to be very careful with their limited dollars. Understood.

And if you mention “earned media” to the candidates, don’t be surprised if one of them takes a poke at you. Earned media — aka “media coverage on TV, in newspapers, etc.” — used to be the tried and true way to work around a cash disadvantage. Get your attack on Hassan’s vote for a massive $280 billion giveaway to international chip makers on the 6 p.m. news, or in the local paper.

But how do you do that when there is virtually no media coverage of your race? Very little coverage of New Hampshire politics at all? What’s the point of showing up at Kuster’s office to call out her vote to ban the sale of semi-automatic rifles made by New Hampshire workers if no media show up to cover it?

The current state of the New Hampshire political media and lack of resources — including here at NHJournal — is a legitimate beef. And with the already left-leaning media becoming more openly partisan, it is particularly tough for Republican candidates.

So yes: It is August, you are broke, and the media suck. Here’ i the response from GOP primary voters:

Republicans are watching the insanity in Washington and the gas prices at the local pumps and they want to win. They are hungry to deliver electoral justice on what they believe is the most incompetent Democratic leadership since Jimmy Carter got attacked by a bunny — and lost. (True story.)

So, where are their champions? Winners find a way to win. They don’t need excuses, they look for solutions. Whether it is social media or old-school coffee klatches or some communications strategy nobody has thought of — winners win.

And then there is something that is both absolutely free and 100 percent essential that none of the candidates have done.

I don’t mean a slogan (“The 603 Way!” “New Generation of Conservative!” “Businessman, Not a Politician!” “Remember the Maine!”); I mean a reason to vote for you as opposed to voting for everyone else. Has any GOP candidate given primary voters the reason they, and only they, should be the nominee?

For example, “You want to see Maggie Hassan finally exposed as the lightweight she is? Put me on that debate stage with her, and even her staff won’t vote for her in November.”

Or: “I know 17 stupid things Democrats are doing right now in D.C. that are hurting you and your family, and I’m going to stick every one of them on Rep. Pappas and show voters how I can fix them.”

Or: “Three words: Energy. Energy. Energy. Nominate me and I will make Kuster own every price-spiking vote she has ever cast and once in Washington, I’ll literally get a shovel and dig a pipeline to get cheaper natural gas from Pennsylvania to your back yard.”

There is no limit to the number of, “It matters if you vote for me, and only me” messages lying on this political field right now. What appears to be lacking is a political talent to pick up one of those balls and run with it.

Forget worrying about a GOP bloodbath in September that keeps the party divided until November. Give Republican voters a quality banner carrier, even with a little GOP blood on their hands,  and they will show up on Election Day.

And forget worrying about money to take on Hassan. First of all, she has already outspent everyone. And second, if Mitch McConnell sees a viable nominee in his morning newspaper on September 14, there will be airplanes loaded with money on their way by lunchtime. The same for Kevin McCarthy and the House.

There appears to be an idea among Republicans that the anti-Democratic climate is going to be enough to carry the day, and the way to win is to avoid as much conflict as possible. Try to win the nomination under the radar, on the downlow, etc.

That is a mistake. Even if this is a Red Wave year, every smart candidate knows to run like you are losing.

Bigger mistake? Assuming that showing GOP primary voters you want to win so badly you are willing to fight for it — even with your fellow Republicans — is a bad thing.

It is a wide-open game, ladies and gentlemen. Would somebody please get out on the field and win it?