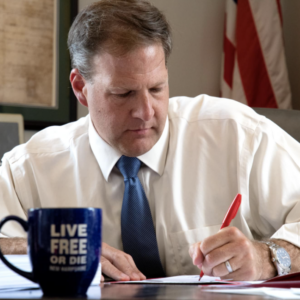 It’s no secret that incumbent politicians love late primary elections. Holding a primary in September means challengers have just a few weeks to pull their post-primary campaigns together, refill their campaign coffers and turn their attention to the current officeholder.

Last year’s September 8 primary in New Hampshire was the next-to-last in the nation, followed only by Delaware a week later.

Gov. Chris Sununu, a three-term incumbent, vetoed a bill to move New Hampshire’s notoriously late primary to the first Tuesday in August. That would have put the Granite State’s primary on the same day as Arizona, Kansas, Michigan, Missouri, and Washington state.

But, Sununu says, it’s too complicated for New Hampshire.

“I agree with the Secretary of State that House Bill 98 creates more problems than it solves,” Sununu wrote in his veto statement. “House Bill 98 would change our state primary from its current September date to the first Tuesday in August, moving our primary election – and the campaign season for that election – into the middle of the summer. This is a time when many Granite Staters are enjoying their vacations and are far less likely to be involved in the electoral process.

“This change could lead to depressed voter engagement in the election and reduced turnout. Furthermore, moving the primary election to the summer could hurt the ability of municipalities to recruit poll workers and Election Day volunteers, greatly exacerbating a challenge that many municipalities are already struggling with.”

Sununu’s in an interesting position politically. On the one hand, if he runs for re-election — and a chance to be New Hampshire’s first-ever four-term GOP governor — a late primary date would help him. If he challenges incumbent Democrat Sen. Maggie Hassan, in theory, it would give her an edge.

In reality, Sununu is likely immune to any impact either way given his popularity, high name ID, and the lack of any serious primary challenger on the horizon. (Franklin city councilor Karen Testerman has announced her third candidacy for governor, but she failed to break double-digits in the 2020 GOP primary.)

But he almost certainly made himself some friends in the legislature on both sides of the aisle. House and Senate incumbents will keep their late-primary-date advantage, which could be more critical than usual next year thanks to re-districting.

Due to COVID-related delays in the release of Census data, incumbents may be looking at a replay of 2012. That year legislative delays, a veto by Gov. John Lynch (D), and a court challenge extending into June kept candidates guessing late into the election year when the primary would be held.

By vetoing House Bill 98, Sununu just gave incumbents more time to lock down their support and less time for their challengers to take advantage of a more level playing field.

“Primaries in September definitely skew the playing field toward the incumbent,” veteran GOP operative Jim Merrill said when the bill was being debated in March.

Republicans currently control both chambers of the legislature.

“The final language of HB 98 that Governor Sununu chose to veto today was the result of extensive bipartisan work and compromise. Despite the Governor’s statement to the contrary, states that have made similar changes to their primary date have seen similar or increased voter turnout. It is disappointing that rather than working to improve upon our election system, the Governor would instead choose to ignore the will of the voters, and put New Hampshire at risk of being out of compliance with federal law.”

Rep. Ross Berry (R-Manchester), one of the most vocal supporters of moving the primary even earlier, is looking at the glass half-full.

“I’m excited to work with Secretary Gardner and the governor and advance the House position – that our state primary should be in June where polling has shown it would have zero impact on turnout,” Berry said in a statement.