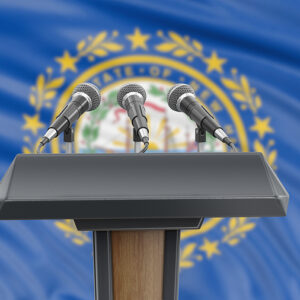 Winners? Losers? The politics of 2022 were so bizarre and unprecedented, the winners were the losers. And vice versa.

In D.C., Republicans won control of the House, retiring Speaker Nancy Pelosi. But did the GOP really “win?” Since Carter, first-term Democratic presidents have lost an average of 44 House seats and six in the U.S. Senate. This November, Democrats lost just nine House seats and picked one up in the Senate.

And at the state legislative level, this is the first midterm election Democrats didn’t lose at least one chamber somewhere across the country since 1934.

So much for “winning.”

The same was true in New Hampshire, where the biggest winners and losers were often hard to tell apart.

Incumbent GOP Gov. Chris Sununu’s victory over state Sen. Tom Sherman (D-Rye) was historic by any measure. In 2010, a year when GOP candidates were sweeping the state’s federal offices, Democrat John Lynch won his fourth term with 52.7 percent of the vote. As the Republicans were floundering in their federal races this November, Sununu won his fourth term by 15 points, with more than 57 percent of the vote.

On the other hand, every candidate he endorsed in the Republican primaries for federal office lost. And they all lost to candidates who got less than 40 percent of the vote and would go on to get crushed in the general election. As weak as they were, Sununu could not stop them among voters in his own party.

It was that kind of year.

U.S. Rep. Chris Pappas (D) is tied with Sununu for the top spot and, ironically, he owes part of his success to the Republican governor.  When Sununu vetoed a congressional map he had privately pledged to support, he changed the trajectory of Pappas’s political career. Last spring when Sununu threw the maps under the bus, the 2022 election looked very different. Gas prices were above $4 a gallon and heading higher. Inflation had broken through the eight percent barrier and President Joe Biden’s approval was plunging.

Would Karoline Leavitt have beaten Pappas in the GOP’s proposed district? That’s the wrong question. With a GOP-friendly seat in what appeared to be a classic midterm blowout for the party in power, the right question is, “Who would have run?” Other strong Republican candidates would almost certainly have entered the race. More national money would have poured into a “likely GOP” pick-up. Pappas might even have opted to skip the NH-01 race and take on Sununu instead, planting his flag as the party’s gubernatorial nominee in 2024.

Whatever the outcome, the GOP map would have made Pappas’ life harder.

Instead, Sununu did Pappas a solid, and the result is now a three-term incumbent established in a seat no Republican has won since 2014. And Pappas is also by far the leading Democratic contender for governor if he wants to run in 2024 or beyond. (Sorry, Mayor Craig.)

Keeping with the “winning is losing” theme, it’s possible to construct an argument that New Hampshire Democratic Party chair Ray Buckley was the state’s biggest winner. Democrats swept the federal races and nearly took the state House. And it was a win Buckley desperately needed, given his dismal performance in 2020. Biden won the state by eight points, but Buckley still managed to lose control of both chambers of the legislature and a humiliating 32-point loss to Sununu.

But all that got buried when Buckley and his team — including his hand-picked executive director Troy Price — lost their party’s FITN primary.

Less than 24 hours before the DNC Rules and Bylaws Committee (RBC) stripped New Hampshire of its historic standing, Buckley said, “We’ve certainly got the commitment of several very influential members of the RBC and we expect the DNC will endorse New Hampshire’s First-in-the-Nation primary.”

Every member except Iowa voted against him.

For Price, this is deja vu all over again. He was Iowa’s executive director during its 2020 caucus fiasco that cost Hawkeye State Democrats their place in line, too. Why did Buckley bring him in for a repeat performance? Another reason he is 2022’s biggest loser.

Buckley had other blunders as well. He went to court in a (failed) attempt to stop Secretary of State David Scanlan from conducting a full recount in a House race Buckley knew the Democrats had actually lost.

And rather than finding a moderate, bipartisan choice to challenge Scanlan for the secretary of state job, he pushed progressive activist Melanie Levesque. Despite a closely-split legislature, Levesque lost 237-175, with two dozen Democrats defecting in the secret ballot.

One more twist to the political thrill ride that was 2022? The Most Important Player in New Hampshire politics this year never set foot in the state. U.S. Supreme Court Justice Samuel Alito and his majority decision in Dobbs v. Jackson Women’s Health Organization case had more impact on Granite State politics than any other single event.

Republicans like Leavitt and Don Bolduc complained — correctly — that Democrats were lying about their position on a federal abortion law. But those lies would not have had the same power in a pre-Dobbs campaign. And while “crazy” is rarely a winning political strategy, the possibility that these GOP candidates’ perceived craziness could, thanks to Dobbs, have an impact on abortion policy made the stakes even higher.

Rep. Wilhelm lead his Democratic caucus to within a whisker of winning control of the House of Representatives, even as Sununu won big and the state Senate kept its 14-10 GOP majority. So the Democrats are still stuck in the minority, but GOP hopes for passing Right to Work legislation or significantly expanding Education Freedom Accounts are almost certainly on hold.

His redistricting of the state House of Representatives barely saved the GOP’s majority. His vetoed maps of the Congressional Districts could have done even more.

Hassan’s “it’s better to be lucky than to be good” career track continued when she got the Dobbs decision in June and Don Bolduc as the GOP’s primary winner in September. Hassan’s list of legislative accomplishments could fit on the side of a Number 2 pencil and she spent the campaign hiding from voters, but thanks to events beyond her control, she won again.

Laughton won a third term from Nashua Democrats, but has still been sworn in just once  — a record unlikely to be challenged. Hard to serve on House committees while serving in the state Department of Rock Breaking and License Plate Art. (Laughton resigned last week.)

Repeatedly shouting the N-word in a conversation with a young, Black activist in the State House isn’t a great way to make friends or influence people. Accusing your fellow Democrat critics of being anti-semites isn’t, either.