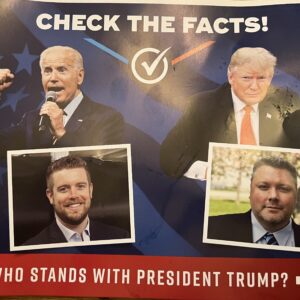 Has the Democrats’ national strategy of interfering in GOP primaries hit New Hampshire?

Republican primary voters in the Second Congressional District have received a series of mailers touting Bob Burns over Keene Mayor George Hansel as the most pro-Trump choice in the GOP field. While campaigning ads declaring an “America First” candidate isn’t unusual in a GOP primary, the mailers did not come from a GOP candidate. They were sent by Reynolds DeWalt, a Democratic political mail shop based in New Bedford, Mass.

The anonymous mailings have no disclosures naming the source of the funding or the organization that ordered them, potentially making these mailings illegal. The New Hampshire AG’s office confirmed they are looking into them.

One piece features a photo of Burns with a bold headline reading “I Stand With Trump” on one side, and declaring him “100 Percent Pro Trump” on the other. The mailer claims Hansel is not. Another mailer asked “Who Stands With Trump?” and made it clear the answer is Burns, not Hansel. 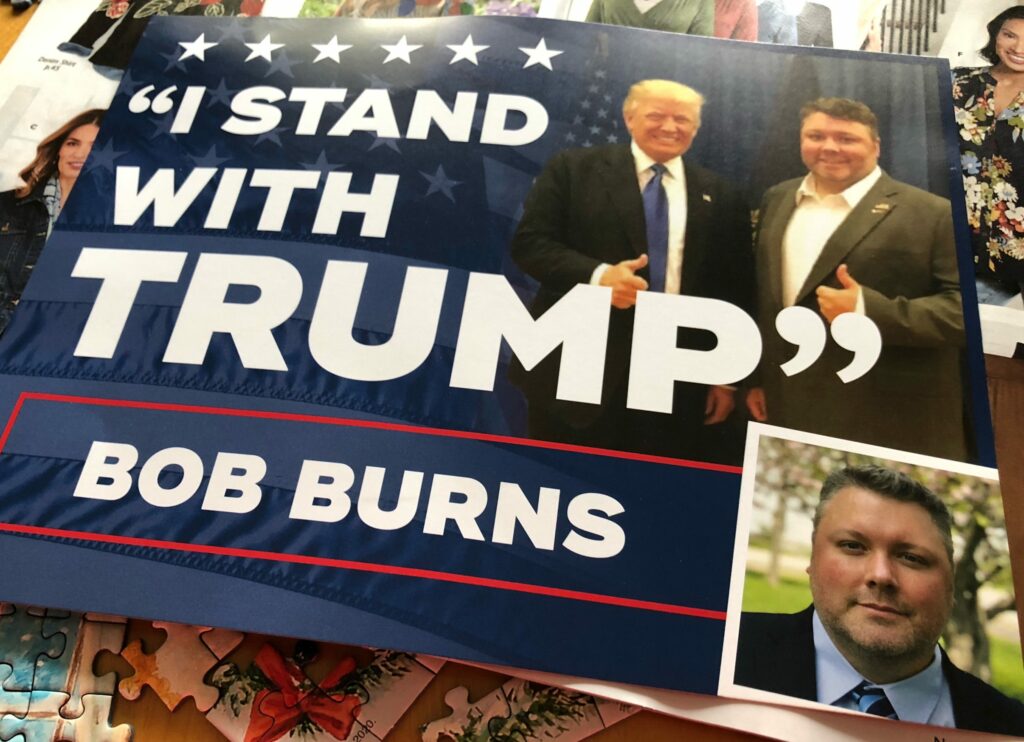 The Burns and Hansel campaigns told NHJournal they had nothing to do with the political mailers.

“Robert Burns for Congress has no connection to these mailers, nor do we have any connection to the anti-MAGA super PAC backing Woke George,” the Burns campaign said in a statement. “Chris Sununu has indicated he will drop support for the federal candidates if he has not blessed their campaign, (so) it’s no wonder the Democrats are attempting to embarrass him.”

Reynolds DeWalt, whose website features printing projects for Hillary Clinton and Bernie Sanders, did not respond to multiple contacts over the weekend. According to the FEC, the company has done hundreds of thousands of dollars of work via Act Blue, the Democratic Party donation portal, in the past two years.

The incumbent, Rep. Annie Kuster (D), did not respond to questions about her campaign and any role they may have played in these mailers.

“It would appear to me, as a direct mail professional, that the Democrat effort to meddle in GOP primaries has come to New Hampshire,” said Chuck McGee, a Republican who handles political and corporate communications at Spectrum Marketing. “I’ve never seen this in my 30 years of working in New Hampshire politics. Clearly, the Democrats are worried about Annie Kuster but I don’t think these illegal mailing will help in the long run.”

And New Hampshire Attorney General spokesperson Michael S. Garrity told NHJournal: “The mailers are on our radar. We see no paid info on them and they are currently being reviewed by our Election Law Unit.”

Spending money in GOP primaries to boost candidates they believe will be easier to defeat in November isn’t a new tactic, but it is also becoming commonplace in the 2022 cycle. In Pennsylvania, Democrats spent $840,000 on far-right Trump Republican state Sen. Doug Mastriano to “help” Republicans pick their nominee for governor. Mastriano’s campaign was underfunded compared to those of more mainstream Republicans.

Now Democrats are making the same moves in a race where many political observers say Hansel, a moderate who has been able to win election in one of the state’s most liberal college towns, could pose a serious threat to Kuster.

“This latest antic only shows that Democrats are running scared of our campaign,” Hansel said. “I’m the only candidate who has built the coalition to beat Ann Kuster in November, so they need to resort to boosting my opponent in order to have a fighting chance.”

Both the Cook Political Report and the University of Virginia’s Crystal Ball say the NH-2 general election is a “toss-up,” and Kuster’s polls consistently reveal she is the least popular Democrat in the state’s federal delegation. In the three polls taken this year by the St. Anselm College Survey Center, Kuster’s approval has averaged 41 percent. In the most recent poll, taken earlier this month, just 36 percent of voters said Kuster deserves to be re-elected.

“I’ve been watching New Hampshire politics since 1978 and I don’t recall this being done before,” longtime GOP strategist Dave Carney said of the mailers. “I certainly don’t know of Republicans ever doing this. It’s a sign of how weak Annie is and how worried Democrats are about Hansel.”