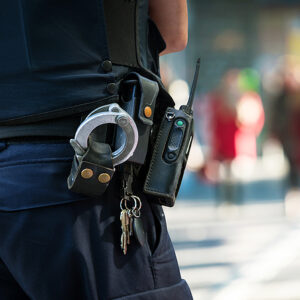 Rep. Chris Pappas said he was proud to support the bill.

“The George Floyd Justice in Policing Act strengthens training, curtails excessive use of force, and increases accountability for bad actors. We’re not immune from these problems here in New Hampshire, but I’m proud that our state is already taking action on many of the priorities proposed in this bill.”

Critics, however, have called the bill “poisonous” and argue it would negatively affect the way law enforcement handles day-to-day routines.

Belknap County Sheriff Bill Wright told NHJournal he supports parts of the bill, but other aspects may be more difficult to bear.

Qualified immunity is a limit on exposure government workers like police officers have to lawsuits. As Supreme Court Justice Samuel Alito put it, “Qualified immunity balances two important interests—the need to hold public officials accountable when they exercise power irresponsibly and the need to shield officials from harassment, distraction, and liability when they perform their duties reasonably.”

Wright doesn’t agree that qualified immunity protects bad cops.“It’s not so much because of the idea of officers doing it right or wrong and being called out for it. It’s the frivolous lawsuits that come into play, and then the lack of protection that would be available for them.”

Wright does support mandating body cameras on law enforcement officers. “I would prefer to have a camera on all the time,” he told NHJournal.

“I can’t fathom how many officers have been exonerated from false reports and false allegations as a relation to body cameras. So I say put cameras in all of our cars, put cameras on all of our uniforms, but again then you’re talking about where the funds are going to come from,” Wright said.

Another controversial aspect of the bill says “proof that the routine or spontaneous investigatory activities of law enforcement agents in a jurisdiction have had a disparate impact on individuals with particular characteristics described in [the bill] shall constitute prima facie evidence of a violation.” In other words, if more men than women are arrested, that would be evidence of sexism.

Zack Smith, a legal fellow at the Meese Center for Legal and Judicial Studies at the Heritage Foundation, says this policy is exceedingly troubling.

“That would essentially establish a de facto quota system for traffic stops, pedestrian stops, interviews, and other investigatory activities, and could encourage officers and departments to ‘game the system’ by stopping more individuals with certain types of characteristics—specifically, women, whites, or Asians—than they otherwise would.”

“There are bound to be disparities in such police interactions because there are disparities in crime rates. Obviously, law enforcement shouldn’t be pressured to bend to ideological demands while ignoring on-the-ground realities. Worse, the bill makes officers liable for these disparities — over which they have no control — and forces them to prove they aren’t guilty of wrong-doing if taken to court, rather than the other way around.”

In other words, arresting the actual criminals who commit the actual crimes would theoretically put police departments in violation of the George Floyd Act.

Sen. Dick Durbin (D-Ill.), the second-highest-ranking Democrat, called the bill — written by the only Black Republican in the chamber —  a “token, half-hearted approach.”

Speaker Nancy Pelosi derided Scott’s bill, saying it was “trying to get away with murder, actually. The murder of George Floyd.” Pelosi refused to apologize for the remark.

Both New Hampshire Sens. Maggie Hassan and Jeanne Shaheen voted with Senate Democrats to use the filibuster rule to kill Scott’s bill. Neither would answer questions from NHJournal about whether they intend to back the George Floyd Justice in Policing Act.