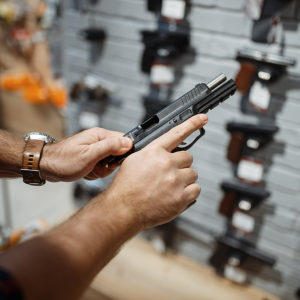 The bills seek to allow property owners to display a firearm to ward off individuals criminally trespassing, exempt individuals inadvertently displaying a firearm from being charged with reckless conduct, allows state law to override local regulations on firearms, and removes the prohibition on carrying a loaded firearm on off-road vehicles and snowmobiles.

One bill, H.B. 196, is relatively simple. It would allow Granite Staters to display firearms to ward off persons criminally trespassing on their property without fear of being charged with a criminal act. While the numbers vary greatly, research by both pro-gun-ownership and anti-gun academics finds Americans prevent tens of thousands, if not hundreds of thousands, of crimes every year by merely brandishing a firearm.

“People who resort to displaying a firearm to ward off attackers or somebody trespassing, criminally, deserve the protection of the state,” prime sponsor Rep. Michael Yakubovich (R-Hooksett) said in his testimony.

Sen. Bill Gannon (R-Sandtown), likened the bill to the viral picture from St. Louis during the nationwide Black Lives Matter protests last summer, when Mark and Patricia McCloskey stood on their lawn with an AR-15 and a handgun to deter any potential violent rioters from threatening them or their property.

Opponents of the bill said it would allow individuals to discharge a firearm without fear of being charged with a crime, a claim sponsors said was incorrect.

“It creates an exception where someone can display a gun, possibly fire that gun, and then claim that they did so in the name of protecting themselves against criminal trespassing,” said Erin Jasina, director of the Domestic Violence Project for New Hampshire Legal Assistance.

“[HB 196] doesn’t give them a right to point the gun at the person or even fire a gun, just the mere display of a gun to dissuade someone from committing a criminal trespass,” said Hannon.

The second bill, H.B. 195, also sponsored by Yakubovich, is another simple change that would exempt individuals who display a firearm from being charged with reckless conduct

Former Rep. Dan Itse (R-Fremont), said the bill would defend gun owners who inadvertently display a firearm, such as when the wind takes their jacket, under which they are carrying a firearm in a holster.

“This is about protecting the ability for a firearm to be displayed in a holster, carrying it to and from your car as you go into the woods. It’s not about waving a firearm around and wrecking anybody with it. That’s clearly reckless conduct,” said Itse. “This is about giving our law enforcement clear and concise guidelines that simply allow the firearm to be seen does not constitute criminal threatening or reckless conduct.”

The most contentious piece of legislation, H.B. 307, sponsored by Rep. Norm Silber (R-Gilford), would add an enforcement mechanism for towns and municipalities that ignore the state legislature before enacting any regulation on firearms in their localities.

In New Hampshire, the state currently holds preemption over localities in regard to firearm ordinances, meaning municipalities are not allowed to create new laws without the approval of the General Court.

“This is designed to provide uniformity in our firearms laws. So that firearms regulation doesn’t vary when you cross the border from one town to another, or from one county into another. It’s uniform across the state,” Silber said when introducing his legislation.

“This bill is more properly categorized as prohibiting a property owner from managing its own property,” said Byrnes.

“State firearms preemption was enacted to prevent a confusing patchwork of firearms laws across the state. Over recent years, numerous governments have attempted to enact local ordinances in violation of the current statute,” said LePage. “This bill corrects that problem by strengthening New Hampshire’s preemption statute. The potential for a myriad of local firearm laws makes compliance very difficult and nearly impossible for law-abiding gun owners.”

The last bill seeks to reconcile a discrepancy in state law. The Constitutional Carry Bill, the first bill signed by then-new Gov. Chris Sununu in 2017, allows people to carry their firearms without a license. But the practice is still prohibited on snowmobiles and off-road vehicles. Sponsors say the bill will correct that and are making it clear that no matter what vehicle you’re traveling in or on, you have the constitutional right to carry a gun.