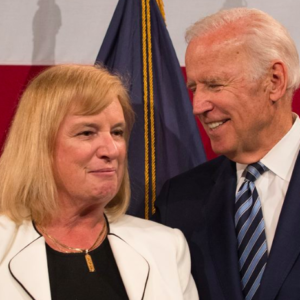 “He’s so well-respected around the world, and he’s got that depth of experience that I think this country is looking for, and I think the world is hungry for,” Shea-Porter said. “I know that he will defeat Donald Trump.”

According to WMUR, Shea-Porter said it was Biden’s connection to the working class that’s inspiring her support. Others note that Shea-Porter was a big Obama supporter, that Biden has campaigned for her several times, and they worked together on veteran’s issues–a priority for the New Hampshire progressive.

The announcement that one-time progressive outsider Shea-Porter will be campaigning with Biden when he visits the Granite State in May is just the latest sign that the New Hampshire political class is determined to do their part to boost Biden’s POTUS bid. And, it appears, slow down Bernie Sanders.

“Granite Staters and young people overwhelmingly voted for Bernie Sanders, a candidate who stands for Medicare For All, Free College For All and the Green New Deal,” Dylan Carney of NH Youth Movement told NHJournal. “Seeing establishment NH Democrats show public support this early in the race for Biden is telling of how they see the future of the party. I’d hope former politicians would leave the primary to the will of the voters.”

Outspoken progressive media personality Arnie Arnesen isn’t happy, either. “I wanted both Bernie and Biden to sit it out on the sidelines as senior statesmen,” she says. “Between the two of them, they’ve spent nearly a century living in the political bubble. They didn’t.

Her take on the early NHDem endorsements: “Predictable.”

“Lynch is the best moderate Republican the state could ever have elected,” Arnesen tells NHJournal. “Terry Shumaker is a friend of  New Democrat Bill Clinton, who brought us all the economic policies Newt Gingrich could only dream of, but Clinton delivered.”

“With the backing of NY’s Gov. Cuomo and his fundraising lists (80 percent of those on the list gave over $10,000), Biden will go to the home of big money Wall Street and the Princes of Finance–not exactly a calling card to the new and expanded base of the Democratic Party,” Arnesen says.

One theme that runs through conversations about the NHDem’s political class supporting Biden is the pre-existing animosity that exists between the two sides. Progressives in New Hampshire are angry, not at Biden, but at the local pols backing him.

“Gov. Lynch lost our respect when he came out to push Secretary of State Bill Gardner over the threshold for another term,” says North Country progressive activist and Sanders supporter Ted Bosen. “Most Democrats are furious with Gardner for lending credence to Trump’s false narrative of massive voter fraud by joining Trump’s voter suppression panel. Lynch cast his lot with Trump when he personally appeared to back Gardner’s re-election. Good luck to Joe Biden. He will need it with Gov. Lynch on his side.”

On the other side, there are still lingering resentments over 2016, how Sanders chose to run his campaign and whether his supporters cost Hillary Clinton the election.  When asked by NHJournal why a progressive activist like Carol Shea-Porter would back a moderate like Biden, one NH Democratic insider replied:

The feeling, it appears, is mutual.