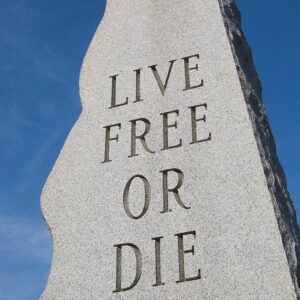 Democrats are doubling down on their opposition to displaying the “Live Free or Die” state motto in New Hampshire schools, blasting Gov. Chris Sununu for signing a bill into law protecting the right of schools to display the iconic words.

Given the motto’s popularity, the move left state Republicans bewildered.

“New Hampshire Democrats prove every time they open their mouths how out of touch they are with mainstream New Hampshire voters,” said veteran GOP strategist Dave Carey.

State Democrats issued a statement on Tuesday blasting Sununu for signing SB 69, which protects the display of both the state and national (“In God We Trust) mottos. They also denounced him for signing SB 320, which requires a basic civics test for high school students.

Ranking Member on the House Education Committee, Rep. Mel Myler (D-Contoocook), accused Sununu of pushing a state religion with the mottos and said SB 69 rolls over the rights of local school boards.

“We know that Granite Staters appreciate the vast multicultural and religious communities in our state and wish for schools to be a welcoming and inclusive place for learning,” Myler said. “Republicans have removed a school board’s autonomy to decide what may be deemed a safe and welcoming environment for students.”

House bill 69 says, “No power or authority of the state of New Hampshire, or any political subdivision thereof, shall in any way restrict, or be construed to restrict, the authority of any school or school district to display the national motto, ‘In God We Trust,’ or the state motto, ‘Live Free or Die,’ in any school building.”

When the bill first came to the floor, 161 House Democrats voted against it. Among them was Rep. Steve Woodcock (D-Conway), who warned his colleagues that posting legendary Gen. John Stark’s words could lead to more suicides by high school students.

“If I am seeing students in middle school and high school who had their arms cut all the way up from razor blades because they are in pain, and I put on the front door of every building ‘Live Free or Die,’ I’m concerned about the trigger that sends that these adolescents, as they come in every day,” Woodcock said from the House floor.

When NHJournal asked Woodcock about his comments, he stood by them.

“These kids might think, ‘If I can’t live free then I’m going to die.’”

Many political observers assumed Democrats would distance themselves from this vote after the fact. Wednesday’s press release shows the House Democratic caucus is, like Woodcock, standing by their story.

Which is great news for Republicans, says strategist Patrick Griffin, who calls the Democrats’ position “comical.”

“The Democrats demonstrated their preferred state motto would be: ‘Live Taxed, Regulated and Oppressed by the Government, or Die.’ That’d look pretty snappy on a license plate,” Griffin said. “These people are so out of touch, so tone-deaf, that they demonstrate again their ability to alienate members of their own party and independents will run from them.”