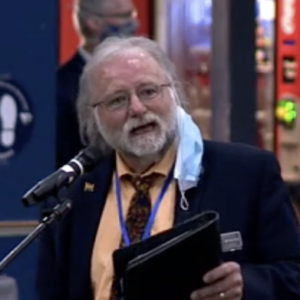 New Hampshire’s iconic ‘Live Free or Die’ motto is something Granite State Democrats can live without — in public schools, anyway.

House bill 69 says, “no power or authority of the state of New Hampshire, or any political subdivision thereof, shall in any way restrict, or be construed to restrict, the authority of any school or school district to display the national motto, ‘In God We Trust,’ or the state motto, ‘Live Free or Die,’ in any school building.”

The bill easily passed in the House, over the “no” votes of 161 Democrats. When it came to the House last Thursday for a concurrence vote with the state Senate, 150 Democrats again said no. One of them was Rep. Steve Woodcock (D-Conway).

Woodcock took the floor to make a “parliamentary inquiry” — a common tactic in the House by legislators who want to make a point regarding legislation coming up for a vote. But there was nothing “common” about Woodcock’s comments.

“Mr. Speaker, if I know that French fries come in multiple toppings,” Woodcock began, “some like salt with a little bit of ketchup, others like a lot of ketchup, some like brown sauce, some like cheese — it sort of reminds me that one size doesn’t fit all. Nor does one deity.

“Also Mr. Speaker, if I know that the motto ‘Live Free or Die’ is patriotic…but yet has a significant impact on our students in school. If we recall adolescents in school, Mr. Speaker, where their brains aren’t yet fully developed, that they have questions like, ‘Where am I going? What am I doing?'”

Woodcock then talked about students who feel bullied or uncomfortable in school, suggesting that New Hampshire’s state motto might “trigger” them to commit suicide or self-harm.

“If I am seeing students in middle school and high school who had their arms cut all the way up from razor blades because they are in pain, and I put on the front door of every building ‘Live Free or Die,’ I’m concerned about the trigger that sends that these adolescents, as they come in every day.”

“And if I know, Mr. Speaker, that I spent many a day in Sunday School…and my vacations in vacation Bible school, and I learned one thing: Jesus did not come into town with a sign hanging from his ass, and nor should any school.”

And with that, Woodcock sat down.

“It was an odd angle that I had never considered before, to say the least,” Rep. Katherine Prudhomme O’Brien told NHJournal. “I was not convinced by his argument.”

“I was surprised and shocked by some of his comments. If kids will be triggered by seeing our state motto, maybe need to remove it from license plates,” quipped Rep. Glenn Cordelli (R-Tuftonboro).

But Woodcock told NHJournal he was completely sincere. He honestly believes having “In God We Trust” contributes to an oppressive environment for non-Christian and non-believing students, and he sincerely fears “Live Free or Die” could lead to more teen suicides.

“These kids might think, ‘If I can’t live free then I’m going to die.'”

Many of his fellow legislators think that is a bit of a reach.

“When I heard his speech, my first thought was, ‘did he forget to take his meds?'” one state Representative told NHJournal.

House Majority Leader Rep. Jason Osborne (R-Auburn) was more measured. “The Democrats’ assertion that exposure to our state motto will induce mass suicide in schools tells me that it is high time parents are provided with more choices of educational environments for their children.”

Deputy Speaker Steve Smith (R-Charlestown) told NHJournal he found Woodcock’s suggestion that Gen. John Stark’s words could lead to suicide “outrageous.” However, he said Woodcock’s remarks were nearly as significant as the fact that virtually every House Democrat voted against allowing the mottos in schools.

“It certainly proves that we look at the world differently. When we took the first vote in the Houe, just eight Republicans voted against it and 10 Democrats voted for it. When it came to concurrence, every Republican voted for it, as did 13 Democrats. There were 150 Democrats who voted against this bill,” Smith said.

The Democrats’ overwhelming opposition to ‘In God We Trust’ and ‘Live Free or Die’ feeds into an existing political narrative that the party does not prize patriotism as highly as their GOP counterparts and is less supportive of religious faith — if not outright hostile.

Woodcock says he’ll put his patriotic bona fides up against anyone.

“I can’t speak for my party, but I was in the army from 1970 to 1973. I was a deacon in my church. I spent four hours this morning collecting flags for Flag Day. It has nothing to do with not being a patriotic party or not being God-fearing,” Woodcock said. “We don’t want people not to feel unwelcome.”

The available data show New Hampshire does have a higher-than-average teen suicide rate, but the number of suicides by people aged 10-24 (the metric used by the CDC) is so small, the percentage of change can shift quickly. For example, from 2016-2018, the Granite State had the 13th highest teen suicide rate. But from 2007-2009 it had the 14th lowest.

Live Free or Die was the state’s motto the entire time.