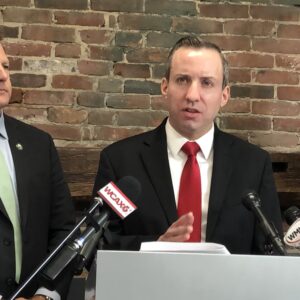 New Hampshire business owners joined Gov. Chris Sununu at a press conference Monday to deliver a message to the Biden administration and the state’s congressional delegation: The vaccine mandate will kill jobs and cost millions of dollars.

“We’ve been in business for 36 years. I’ve never seen such an aggressive mandate in my entire career,” said Tom Boucher, president of the Great New Hampshire Restaurants company. “This isn’t about being pro-vaccine or anti-vaccine. It’s about the federal government driving a wedge between me and the employees I love.”

Sununu hosted the presser, along with Attorney General John Formella, who has joined in two of the many lawsuits challenging the legality of both of the Biden administration’s mandates. One applies to federal workers and contractors. The other is a mandate imposed on private businesses with at least 100 employees via the Occupational Health and Safety Administration.

Formella laid out some of the legal principles underpinning the 11-state challenge New Hampshire has joined, including the “broad impact” of the OSHA mandate on the Granite State.

“The impact we’re pointing to is that there are over 750 businesses in New Hampshire that have more than a hundred employees, and there are over 250,000 employees that work for those businesses,” Formella said.

But it was the business owners who laid out specific impacts from the OSHA mandate.

“I just would say that with the very tight labor shortage we’re already facing, [we know] that team members of ours will leave because of this,” said Amanda Grappone Osmer of the Grappone Automotive Group. “If they can go work for a smaller business, that will absolutely affect our ability to serve.

“I’ve spent the better part of my  25-year career in the auto sector, trying to figure out the best possible way to serve our team members and our community,” Osmer added. “This just is not in keeping with that.”

“How can I run a business when I have no talent?” asked Kathy Garfield with the Keller Companies. She also addressed the argument that, because the OSHA mandate allows for weekly COVID testing in lieu of vaccination, its impact isn’t significant.

“Has anybody tried to get a COVID test in the last week, week and a half? I have. I went to three facilities. It’s impossible. The facilities are booked, or they’re short-staffed,” Garfield said.

And even if the testing capacity becomes available for tens of thousands of workers, there’s the issue of cost.

“Our employees are going to have to pay $200 a week. For some people, that’s the difference between eating and starving. So what are these employees going to do? They’re going to find an employer with less than 100 employees,” Garfield said. She pointed out there are radio and TV ads from employers soliciting workers by announcing they are too small to be hit by the vaccine mandate.

“This is incredibly disruptive,” Garfield said. “In this labor market, losing just one employee is a disruption.”

When a reporter asked if the businesses could cover the costs, Boucher noted that $200 a week is more than $10,000 a year per employee. If half of his employees chose not to get vaccines, paying for testing would cost his company more than $3 million a year.

All three business owners said they’ve reached out to New Hampshire’s federal delegation — Boucher said he’d spoken to Sen. Jeanne Shaheen that morning — but to no avail. All four Democrats back the mandates, including the potential fines ranging from $13,653 to $136,532.

Asked what they would say to business owners impacted by the Biden administration’s mandate policy, all four members of the federal delegation declined to respond.

However, Sens. Shaheen and Maggie Hassan did send out a press release touting “legislation to improve delivery services by designating a unique zip code for Swanzey, N.H.”

For Sununu, the issue comes down to basic math.

“If half of [New Hampshire’s unvaccinated workers] choose to get the vaccine and half of them don’t, You’ll still have tens of thousands of employees at a minimum — maybe more than a hundred thousand employees across the state — who are going to be displaced in a workforce that is already facing massive shortages,” Sununu said.

“Why this math is so evident to everyone in this room and yet not to Washington, DC, or our congressional delegation or to the president or to OSHA? I don’t know why. It’s not hard,” Sununu said.

Rather than back down, however, the Biden administration is taking an even more aggressive stance.

“The White House on Monday said businesses should move forward with President Joe Biden’s vaccine and testing requirements for private businesses, despite a federal appeals court ordering a temporary halt to the rules,” CNBC reports.

“People should not wait,” White House Deputy Press Secretary Karine Jean-Pierre said. “They should continue to move forward and make sure they’re getting their workplace vaccinated.”