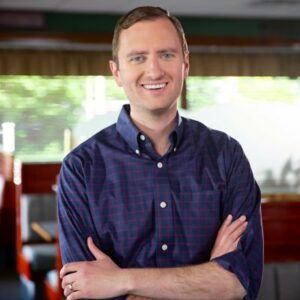 NH-01 Field Trains Its Fire on Mowers in Tuesday Debate

The five First Congressional District GOP primary candidates who faced off in a radio debate on Tuesday agreed on most of the issues — including who they believe is the frontrunner in this race.

The debate was moderated by host Jack Heath on the Pulse of New Hampshire radio network.

Matt Mowers, the 2020 GOP nominee, came under fire from nearly all of his competitors. The lone exception was former Executive Councilor Russell Prescott, who has sworn off making political attacks.

Karoline Leavitt called Mowers “the hand-picked candidate of the Establishment.”

Rep. Tim Baxter accused Mowers of being the “right-hand man” of President Trump’s White House Coronavirus Response Coordinator Deborah Birx, calling him one of the “political hacks who lobbied to put her into power. You’re culpable for this mess that terrorized our public.”

And Gail Huff Brown targeted Mowers over the fact that he voted in both the New Hampshire presidential primary and the New Jersey GOP primary in 2016.

Mowers asked listeners “to notice the debate today looks a lot like the debate in 2016,” with the rest of the field attacking one candidate, as happened to Donald Trump. While Mowers did fire back a few times, he appeared to be working a broader strategy of reminding voters again and again of his time in the Trump administration and the president’s previous support.

Mowers’ message to GOP primary voters: If I was good enough for Trump, I’m good enough to be the nominee.

While the most recent NHJournal poll showed Mowers with a 31-to-16 percent lead over Leavitt, she appeared comfortable leaving most of the attacks to Baxter. He happily obliged, repeatedly bringing up Mowers’ Birx connection and accusing Mowers of being part of the D.C. swamp.

Not all of Baxter’s punches landed. At one point he claimed Mowers is the wrong pick for the GOP because “he has lost every election he’s run.” It was an odd attack given Mowers has only run for office once before, and he won the 2020 GOP primary before losing to Rep. Chris Pappas in the general election.

Leavitt also took up the attack linking Mowers to Birx, noting Mowers served as her chief of staff and citing a CNN article she said “touted and praised Matt Mowers. He got Dr. Birx a job in the White House.”

The CNN article makes one reference to Mowers. “Though Birx was not personally close to the President,” it read, “she was able to develop a close relationship with this White House in part because Trump campaign official Matt Mowers served as her chief of staff for nearly two years, according to a source familiar with her situation.”

Also, as Mowers repeatedly pointed out, while he had previously served as her chief of staff, by the time she got the COVID-19 job, he had left the Trump administration and was back in New Hampshire campaigning for Congress by then.

There were a few other scraps, nearly all instigated by Baxter, but no “gotcha” moment likely to change the trajectory of the race. In fact, the harshest blow was landed on Gail Huff Brown by … Gail Huff Brown.

At one point in the debate, Mowers pushed back on an attack from Brown by calling her a “liberal” who “supports abortion on demand for the first six months of pregnancy.” Rather than pushing back, she used a follow-up question on abortion to label herself “definitely pro-choice in the old school view, women have that choice.”

Embracing the “pro-choice” label in a GOP primary is an unusual political strategy, to say the least.