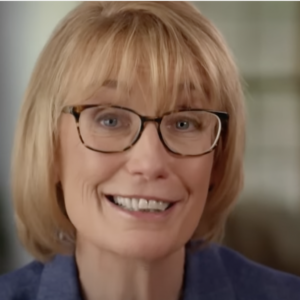 An NHJournal review of Hassan’s TV ads over the past three months found no reference to “Democrat Maggie Hassan” even a single time, either in the text or graphics. And while President Joe Biden is warning  about “MAGA Republicans” posing a threat to democracy, Hassan has been running campaign ads bragging about “working with Republicans” while “taking on” Democrats and even “pushing Joe Biden.”

In fact, while she has brought up Republicans in both positive and negative contexts, Hassan’s only references to her own party and president are how she has worked against them.

It’s a telling strategy, political pros say, running contrary to the narrative that Democrats are on the rise and the GOP’s brand is fading under the impacts of former President Donald Trump and the abortion issue. If Democrats are doing so well, they ask, why isn’t Maggie Hassan running as one?

Instead, she is bombarding airwaves with the message that she’s “independent” and “bipartisan” — words that appear far more in her messaging than “Democrat” or Biden. In fact, in a single ad, the Hassan campaign calls her “independent” or “bipartisan” six times in 30 seconds.

Republicans are mentioned five times in three different Hassan ads. One released in response to the U.S. Supreme Court’s reversal of Roe v. Wade makes three references to “anti-choice Republicans.” However, the rest of her ads claim she has worked with GOP lawmakers on issues like the budget and prescription drug benefits.

At the same time, she disses Democrats. In one ad, she brags about “taking on members of my own party” without naming that party. In another, she notes that she was one of just two Democrats to oppose earmarks — a clear slight to the other members of her party.

The name “Joe Biden” is only mentioned once, as Hassan says she was “pushing” the president to open the strategic petroleum reserves.

“This is a classic move for most Senate candidates in a midterm to run away from the president of their party,” Andy Smith, a political science professor and director of the Survey Center at the University of New Hampshire, said. “It’s usually done with a nod, nod, wink, wink back to their party. Her hope is this diminishes the damage that Biden could do with his unpopularity in the state.”

Biden has a 41 percent approval rating in New Hampshire according to the UNH Survey Center’s Granite State Poll released last week. Hassan’s job approval has hovered around the same level, another sign her party affiliation may be a problem in November. And in the new Washington Post poll, Biden’s approval has fallen once again to 39 percent.

Based on her campaign messaging, Hassan appears to know it.

Asked if she would campaign with Biden in New Hampshire, Hassan has been careful to say the president is “welcome” in the state without making a commitment. And when Biden visited Portsmouth in April Hassan was notably absent from the platform, never appearing on stage with the president.

Polls show Hassan with a solid lead over Republican Don Bolduc, and she has millions more cash on hand than her underfunded opponent. Still, Smith said, Bolduc could be a tougher opponent than expected, particularly since neither Biden’s approval nor the economy are likely to improve between now and Election Day.

“This will be a competitive Senate race. It’s a good year for Republicans and the economy is not going to get much better,” Smith said.

“Bolduc has been caricatured a certain way in the national press. He’s not really a Trump guy. He ran and lost in a 2020 primary, and his opponent got the Trump endorsement,” Smith continued. “He’s good on the stump and, much like other Republicans, he’s walking that thin line not to antagonize Trump but not be too close to him for the general election, either.”

Bolduc’s other strength? He’s not a Democrat. A new ABC News poll of voters in competitive congressional districts — like the two in New Hampshire — found registered voters favor Republican candidates by 55 to 34 percent.

Fred Lucas is the chief news correspondent for The Daily Signal and has written and reported for Fox News, Newsweek, National Review, Newsmax, National Interest and other outlets. He wrote this for NHJournal.com.