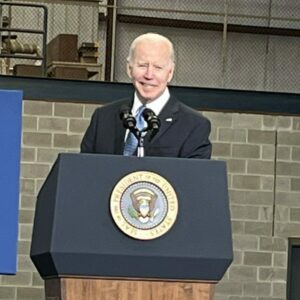 “What the hell was that?”

That’s how one Granite State politico summed up President Joe Biden’s visit to Portsmouth on Tuesday, a sentiment shared by insiders from both sides of the partisan aisle.

New Hampshire Democrats are, understandably, reluctant to criticize Biden on the record. Others, like state Rep. Manny Espitia (D- Nashua), were so desperate to avoid saying anything at all he declined to respond when a reporter asked, “What did you think of the speech?”

“I don’t want to comment,” the Nashua progressive said, waving off the reporter.

Espitia’s in a tough spot. While he was in the cavernous, unheated warehouse at the Port Authority with about 90 invited guests, his fellow Black, Indigenous, and people of color (BIPOC) progressives were outside protesting immigration policy. Sen. Maggie Hassan and Rep. Chris Pappas are among a handful of Democrats backing legislation to stop Biden from dropping the Title 42 emergency authority used to turn away would-be migrants at the southern border. Biden’s visit highlighted the intramural debate and inspired progressives to act. 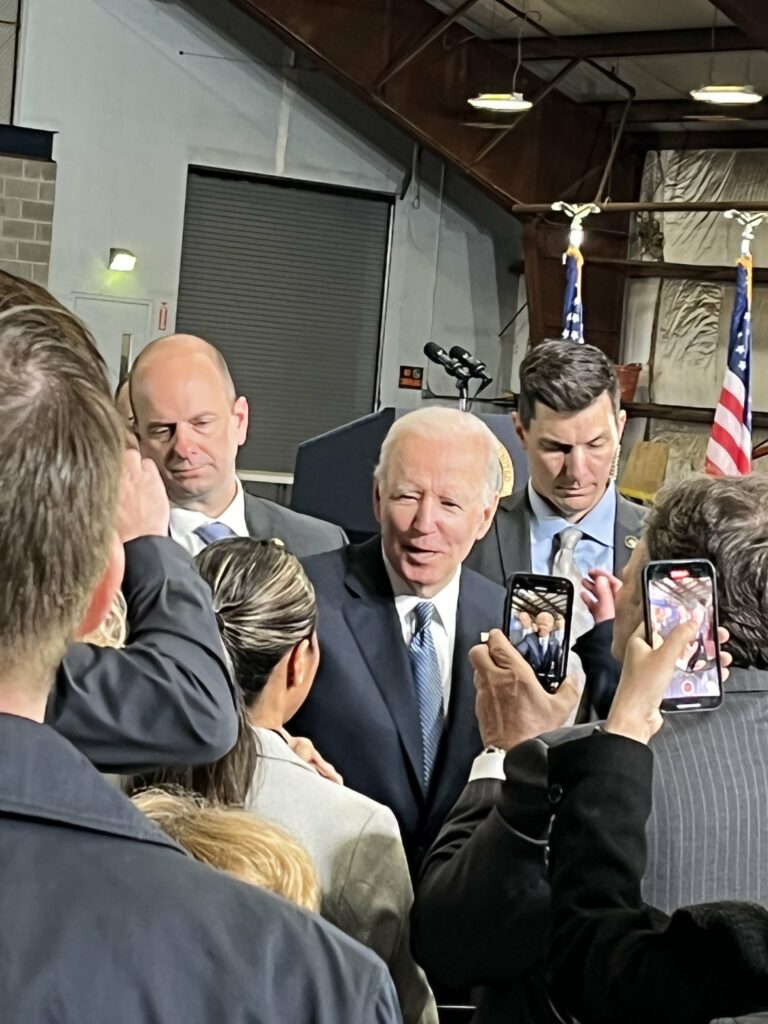 President Joe Biden works the crowd at an event in Portsmouth, N.H.

Not great news for the already-embattled incumbent Democrats, who had plenty of bad news already.

Monday night, NHJournal released a poll showing 55 percent of Granite Staters disapprove of the job Biden is doing and 54 percent are not confident he is physically and mentally up to the job. Tuesday morning, the UNH Survey Center released the results of its latest panel which found just 42 percent of Granite Staters approve of Biden’s handling of the economy while 56 percent disapprove.

And Biden showed up just in time to bring the biggest hot-button topic of the day, mask mandates, to New Hampshire. The issue is a disaster for Democrats, who are stuck on the losing side of a debate driving away voters in all but the bluest corners of America. If the White House had ended the mandates, Biden could take credit for the celebrations breaking out on airplanes across the U.S. Monday night.  If he denounced the ban, Biden could shore up the COVID-obsessed voters in his base.

Instead, the White House started the day supporting mandatory masks, was briefly interrupted by Biden announcing in Portsmouth he opposed them (“It’s up to [the individual]”), before finally announcing it plans to appeal a judge’s ruling on the matter.

In Tuesday’s speech, Biden did not talk about his administration’s mask policy, or about the immigration crisis, either. He fired up Air Force One and flew all the way to New Hampshire and, surrounded by incumbent Democrats looking at a red wave about to wash over their purple state, he talked about… infrastructure.

“Infrastructure!” “Internet!” “Waterways!” The political electricity is palpable! And Biden’s riff on how new federal funding for highway improvements could save Granite Staters “an average of $476 a year extra in gas and repairs and longer commute times,” the crowd almost burst into applause.

Biden’s speech — a middling Chamber of Commerce luncheon speaker’s effort — was uninspiring and the hand-picked crowd of Democratic insiders was clearly unmoved. Where was the pitch for the Biden 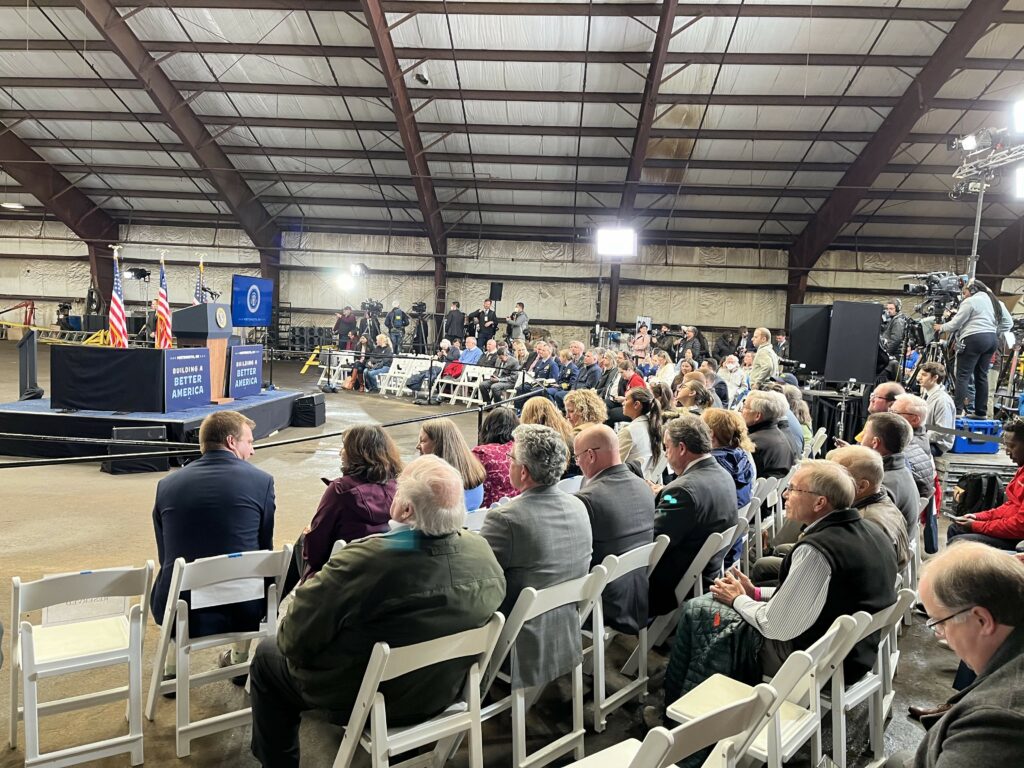 The crowd at the Portsmouth Port Authority awaiting remarks from President Joe Biden on April 19, 2022.

presidency, the case for his administration the audience could take home with them? Where was the message on handing inflation — other than the “Putin’s Price Hike” hackery that has already failed with voters?

And most of all, where was the moment when Biden pointed to the delegation and said “…and that’s why I need you to send Maggie Hassan and Chris Pappas back down to Washington, D.C.”

It didn’t happen. They did not stand with Biden on the podium or pose for a “We’re all in this together” photo, either. No high-dollar fundraisers. No surprise drop-in on a Portsmouth ice cream store showcasing a charming video of Biden on the stump. Nothing.

The impact of Biden’s visit on New Hampshire politics had faded even before Air Force One lifted off Tuesday afternoon.

Not so, says James Pindell, who spent years covering New Hampshire politics. He thinks Biden’s decision to drop in on the Granite State — a week after a visit to Iowa, he notes — is about a possible 2024 primary.

“Bear in mind that a primary challenger need not win the nomination to have a major impact. Every time an incumbent president has faced a significant primary challenge, going back to 1968, they have not been reelected,” Pindell wrote. “While he may be there to talk about infrastructure, not campaign politics, it will serve as a planting of the flag and warning to any potential challengers: The president is at least looking at reelection.”

If that’s true, then the bad news for New Hampshire Democrats is just beginning.