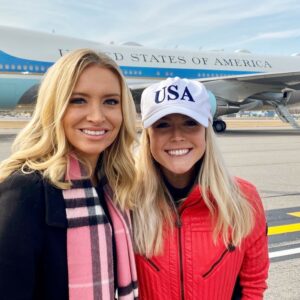 Not even the ones who’ve been indicted.

When former Trump advisor Steve Bannon was charged by a federal grand jury with contempt of Congress for refusing to answer questions from the House committee investigating the Jan. 6 Capitol riot, Leavitt didn’t try to distance herself from the controversy. She embraced it.

“Joe Biden is weaponizing the DOJ against President Trump and his loyal supporters, but his political witch hunt won’t distract from the fact that his administration’s incompetence is destroying our country,” Leavitt said. “When Republicans win big in 2022, all of these shams will come to end.”

She issued a similar statement when her old White House boss, Kayleigh McEneny, was subpoenaed as part of the same investigation, adding: “Kayleigh McEnany is a patriot and I’m proud to call her a friend.”

The 24-year-old Atkinson native may be young, but she’s not running a kiddie table campaign for the GOP nomination in the First Congressional District. When she’s not appearing on Bannon’s fringe-nationalist podcast declaring Trump “absolutely” won the 2020 election, she’s throwing down on fellow primary candidate Gail Huff Brown for holding a fundraiser with anti-Trump Republicans.

“Karoline Leavitt took to Twitter to slam ‘Republican’ Gail Huff Brown for having Senators Lisa Murkowski and Richard Burr, both of whom voted to impeach President Trump, host a DC fundraiser for her,” her campaign said in a press release they blasted out Monday.

While Matt Mowers received Trump’s endorsement in 2o2o and made several campaign stops with him in New Hampshire, Leavitt has made it clear she thinks she’s got a shot at being Trump’s candidate in the primary. She told radio host Jack Heath last week, “I know the president is aware of the campaign that we’re running and I hope to earn his support.”

And she points out that Rep. Elise Stefanik (R-N.Y.), the most powerful Republican woman in Congress, also endorsed Mowers last year.

“You’ll notice Stefanik in endorsing me this time around,” Leavitt told NHJournal.

Leavitt has made the calculation that the path to victory is through Trumpworld, and she’s pulling out all the stops. At a time when saying Donald Trump really won the 2020 election is often dismissed as “The Big Lie,” Leavitt continues to insist Biden and the Democrats somehow stole the election.

“I’m an ‘America First’ warrior,” Leavitt likes to say, a message with a very specific group of voters in mind.

The NH-01 GOP primary field is already fairly large. In addition to Leavitt, Brown and Mowers, it includes Julian Acciard, state Rep. Tim Baxter (Seabrook), and Gilead Towne. And the district hasn’t even been formally drawn yet. It’s possible once the new lines are finalized, more candidates may enter.

And they’re not just letting Leavitt have the “Forever Trump!” lane to herself. Mowers’ connection to Trump, including his time working in the administration, is already well known. Brown’s husband, former Massachusetts Sen. Scott Brown, served as Trump’s ambassador to New Zealand. And Baxter has been hitting the MAGA message hard, too, sending campaign emails recounting “My Favorite Trump Moment” and demanding an audit of New Hampshire’s 2020 election results. (Biden won by nearly 8 percent.)

But nobody is being as aggressive as Leavitt in seizing on the issues the hardcore Trump base has embraced, like downplaying the events of January 6 or insisting Trump is the victim of a national election fraud conspiracy. The premise is that 2024 can’t begin until Republicans go back and re-litigate 2020.

That message is just fine with the Democrats, by the way.

“Steve Bannon is a disgraceful thug whose relevance in the GOP has been a stain on their party for years,” Democratic Congressional Campaign Committee spokesperson James Singer said in a statement. “Whether it’s Matt Mowers standing by Corey Lewandowski after credible allegations of sexual harassment or Karoline Leavitt cheerleading those behind the election lies that led to the storming of our Capitol, it’s no surprise this group of out-of-touch GOP primary candidates continues hitching their wagons to habitual liars.”

But Democrats hating Trump is hardly a surprise. The real mystery is whether Leavitt or Mowers will more closely reflect the GOP primary electorate, particularly after the district is redrawn to be more Republican — and more pro-Trump.

Mowers, hardly an anti-Trumper, says he believes that “despite concerns” about how elections were handled in 2020, “based upon on what I see and votes that were cast, the guy who got the most votes is sitting in the White House.” Leavitt has denounced that acknowledgment of the facts as “rolling over and siding with Joe Biden.”

Last week a national poll of Republicans found 75 percent believe Trump has a legitimate claim that there were “real cases of fraud that changed the results.”

And a New Hampshire Journal poll in August found 86 percent of NHGOP’ers say Donald Trump was a good president and 65 percent want him to run again.

The consensus among Republican strategists, both in New Hampshire and D.C., is that not even Trump can save Leavitt from her biggest problem as a candidate for Congress: She is simply too young and unknown to win the primary. Having the endorsement of Stefanik is great — and a recent shoutout from local Republican donor Tom Moulton is even better. But GOP primary voters tend to be older and getting them to vote for a candidate who’s barely legally old enough to hold the office may be a bridge too far.

“I talk to voters every day and I’ve found my youth is a huge strength,” Leavitt told NHJournal. “People want change; and as Republicans, we need to elect young candidates who can resonate with young voters, or we will continue to lose our country.”

Meanwhile, the other NH-01 candidates are definitely taking her seriously. Brown’s campaign spokesperson released a statement in response to Leavitt’s attack on the campaign’s fundraiser with anti-Trump Republicans.

“Miss Leavitt knows that Gail and her family not only helped get President Trump elected but served overseas advancing his America First Agenda for almost for years and strongly opposed impeachment. Nice try.”

It may not have just been a “try,” one GOP strategist told NHJournal.

“She knows what she’s doing with tweets about being who’s being most loyal to Trump, and it’s not just ‘playing to the base.’ Her real target is an audience of one — sitting poolside in Mar-A-Lago.”