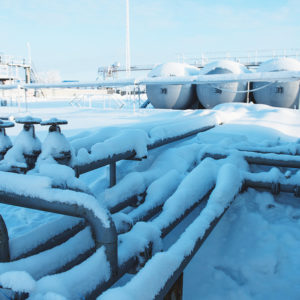 It’s a cold week for the U.S.–so cold, in fact, weather maps have been forced to adopt new color schemes. Another polar vortex has swept through the country, bringing winter storms and frigid temperatures to people living across the Midwest and New England. Mother Nature’s brutal blast is both a reminder of the need for reliable energy infrastructure and a warning that renewable generation methods have limited effectiveness in the dead of winter.

Last year, ISO-New England, the independent non-profit that manages the six state’s power grid, released a sobering report on the future of the grid. The report analyzed different scenarios of how fuel supply and demand might play out in the winter of 2024-2025, finding that “all but the most optimistic case resulted in load shedding, also known as rolling blackouts or controlled outages.”

In response to both the report and the experience of last year’s sustained cold snap, ISO-New England began working to change its operating procedures to better ensure a secure fuel supply. Using a system called Pay for Performance, generators are contractually obligated to provide a certain amount of energy. If they are unable to do so, the generator pays a fine which goes to whichever other generator picked up the slack for the coverage gap.

New England hasn’t seen blackouts in this cold snap, but strains are showing. The lack of pipeline infrastructure has a direct effect on the energy options available to customers. On January 18, ConEdison, a New York utility company, announced a moratorium on new natural gas customers in the Hudson River Valley, saying that “new demand for gas is reaching the limits of the current supplies to our service area.” This means that residents and businesses in New York City, Long Island, and Yonkers will face more limited energy options.

To prepare for winter demand, the region is bringing in foreign natural gas at a rate not seen in other parts of the country. Although four out of eleven American LNG terminals had taken shipments of foreign LNG through October, the import terminal in Everett, Mass. alone accounted for 84 percent of the reported volume, some 48 billion cubic feet.

January temperatures could push those numbers even higher. Wind and solar combined only comprise less than 5 percent of the energy mix. Short winter days push these numbers even lower, making renewables a poor choice for emergency generation to meet demand spikes.

Limitations in energy supply are particularly serious during midwinter cold snaps, since natural gas is used to both heat homes and generate power. A new digital dashboard launched by the Energy Information Association (EIA) shows that the region is bringing in 3.38 billion cubic feet per day of natural gas. Natural gas consumption is rising in New England, but the transition isn’t complete.

In New York, where half of the state’s generating capacity runs on natural gas, with 70 percent of these facilities capable of switching over to burn oil. If temperatures remain low enough, long enough, utilities would be forced to switch back to burning the dirtier fuel. One of the main limitations preventing an overall switch to natural gas is concern about fuel supply. Data for this week shows at least four pipelines running at near capacity, leaving little room to increase shipments.

Winter shows the need for fuel security and a mixture of generation sources. Unfortunately for New England residents, environmentalist groups continue to resist not only pipeline construction, but even the consideration of fuel security.

“ISO has presented the region’s choice in a biased way, with clean energy discounted as speculative or far off and paths relying on pipelines or bailouts or polluting energy as more reliable or certain.” said an Natural Resources Defense Council (NRDC) press release last spring, when ISO New England last pushed for new construction.

A lack of infrastructure is pushing New England utilities to rely on surge pricing and other emergency measure to ensure enough power at critical times. It’s just another way in which the scarcity of pipelines is raising consumer prices.