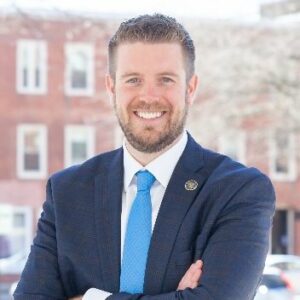 Keene Mayor George Hansel has yet to announce his candidacy in New Hampshire’s Second Congressional District race, and he has already been targeted by a political dirty trick.

The Keene Sentinel ran a story on Sunday declaring, “Keene Mayor George Hansel announces run for Congress.” It was based on “a tweet from his new campaign account.” The paper did not speak to Hansel.

Less than 24 hours later, the Sentinel pulled the report and posted a correction: “A story written by The Sentinel and posted on our website Sunday evening claiming that Keene Mayor George Hansel would be running for the N.H. Congressional District 2 seat, currently held by longtime Democratic U.S. Rep. Annie Kuster, has been removed.”

The account, @Hansel4Congress, became active in just the past few days and it followed news outlets like NHJournal. Its few posts featured anti-Trump and pro-abortion messages likely to hurt a candidate’s efforts in a Republican primary, a sign that it was a political dirty trick. Sources familiar with the account tell NHJournal it was created by a Republican who opposes a Hansel candidacy.

Hansel’s actual Twitter account had no mention of a potential congressional bid as of Monday afternoon. However, the Federal Election Commission reports the “George Hansel for Congress” committee was formally created on Friday, May 27. The treasurer is listed as David Hansel.

Republican insiders have been buzzing for weeks about the possibility Hansel might challenge Democrat Kuster, particularly since businessman Jeff Cozzens dropped out of the GOP primary in April. With polls showing President Joe Biden’s approval rating below 40 percent — and Kuster not doing much better — Republicans believe a 2022 wave could be big enough to bring down the five-term incumbent, despite her $2.4 million war chest.

After the GOP’s surprising successes in the 2021 election cycle, the National Republican Congressional Committee put Kuster on its expanded target list.

Hansel did not respond to multiple requests for comment about the FEC filing. He was first elected mayor of Keene in 2019 and had easy re-election in November, facing no serious challengers. Before becoming mayor of the left-leaning college community, Hansel was a two-term city councilor. He is currently vice president and manager of innovation/engineering and Keene’s Filtrine Manufacturing Company, a business founded by his uncle, Peter Hansel.

Because the lines of New Hampshire’s new congressional districts have yet to be finalized for November’s election, political analysts at organizations like the Cook Political Report have not released their view of the Second District’s midterm prospects. No Republican presidential candidate has won in the district this century, and the last Republican to represent the district was Rep. Charlie Bass, who won in the 2010 red wave midterm.

Hansel positioned himself as fiscally responsible in his first term as mayor. He pushed for an economic development action plan for the city and the creation of a home weatherization/renovation program for Keene’s eastside homes through a public/private partnership, according to his campaign. He also lobbied for the adoption of RSA 79E that allows Keene businesses to take advantage of New Hampshire’s development incentives.

He has also supported the Black Lives Matter movement and maintained a local mask mandate after the state order expired — positions likely to be problematic in a GOP primary.

Already in the race are Bob Burns and Lily Tang Williams.