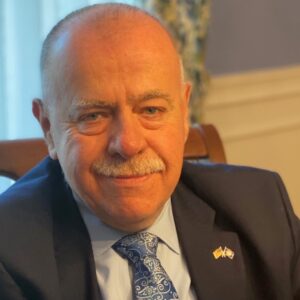 Just weeks after losing his bid for state Senate, businessman Lou Gargiulo announced via Facebook on Sunday he was entering the race to lead the New Hampshire state GOP.

“I’m Lou Gargiulo and I’m running for the chairmanship of the New Hampshire Republican Party. Why? I come to you with a servant’s heart concerned that our children’s and grandchildren’s future rests in our hands,” Gargiulo wrote.

And in a reference to one of the top concerns Republicans have about the chairman’s job — fundraising –, Gargiulo said he was a “prepared critical thinker with proven financial acumen.”

Gargiulo said he will make a formal announcement on Tuesday.

Republican National Committeeman Chris Ager announced his state chair bid a month ago soon after ending his tenure as chairman of the Hillsborough County GOP.

“I have and will continue to fight to protect our First in the Nation Primary and tirelessly advocated for our principles of lower taxes, smaller government, individual responsibility, and local control as outlined in the platform,” Ager said at the time. “As we approach 2024, it is imperative we unite as a party behind these conservative principles and continue to build a well-oiled machine focused on achieving electoral success.”

Ager declined to comment on Gargiulo’s announcement Sunday night, referring NHJournal to his previous comments about a possible match-up.

“Lou is a great guy. Regardless of what happens, I’d love to work side by side with Lou on behalf of the Republican Party.”

Gargiulo, who currently serves on the Hampton Falls Board of Selectmen, has long been involved in Granite State Republican politics as both a candidate and a financial contributor. He told NHJournal before Christmas that if he decided to run, he would make party unity a top priority. “Republicans have to have people on the same page to win. It’s time for the infighting to end.”

Gargiulo is viewed by some Republicans as part of the Trump wing of the party. He backed pro-Trump congressional candidate Karoline Leavitt in the GOP primary last fall and he was an early donor to Donald Trump’s 2016 campaign. And he requested a recount in the Senate 24 race he lost to Debra Altschiller by nearly 3,700 votes as part of a self-declared “fact-finding mission” on behalf of election-denier conspiracy theorists among his supporters.

However, Gargiulo also contributed to establishment Republicans like George W. Bush and Mitt Romney. And with the backing of Gov. Chris Sununu, he handily defeated Regina Barnes, backed by the fringe anti-vaccination group ReOpenNH, in the 2020 GOP state Senate primary.

With Gargiulo’s announcement, the 505 members of the state GOP committee will have a competitive election for both the chair and vice chair positions. Last year’s GOP U.S. Senate nominee Don Bolduc is seeking the vice chair job, as are longtime GOP activist Christine Peters and state Board of Education member Ryan Terrell.

Whoever wins will take over the reins of a state organization that has virtually no staff and was badly outspent by the New Hampshire Democratic Party by about a four-to-one margin in both the state and federal races.

Meanwhile, the state’s grassroots voters are battling over whether to embrace or reject the politics of Trump. Bolduc, Leavitt, and Second Congressional District GOP nominee Bob Burns all embraced the Trump-style politics rejected by general election voters across the country. They won their primaries but lost, badly, in the general election.

Granite State Republicans who say it is time for the party to move past Trump note none of the three got more than 37 percent of the vote in their own primary. Evidence, they argue, that the Trump base is a minority even within the party.

“There’s no reason to think most people who just got elected to the state committee in caucuses last month won’t find Ager perfectly acceptable,” one longtime NHGOP insider told NHJournal. “Probably half of them or more were on the committee when they dumped Steve.

“Lou’s lost twice in a row [for state Senate] and his pursuit of the recount was ill-advised,” the Republican added. “Ager may have some enemies but Lou’s not a great rallying point.”

“As your chairman, I will listen to you, and bring your concerns to the forefront, without influence from special interests, or political elites, I will never compromise my core values. Any action I take or any decision I make will be guided by what’s in the best interest of the people of New Hampshire and the next generation.

“I seek this position not for me, but as a vehicle to improve the futures of our children and grandchildren.”

GOP strategist Mike Biundo said he was currently undecided in the chairman’s race, but he added he had some concerns about Gargiulo’s candidacy.

“I think Lou is a good guy and a smart businessman. That doesn’t necessarily mean he would be a good chairman,” Biundo said. “The chair of the NHGOP has to understand how to outmaneuver his or her counterpart Ray Buckley in the media and at the ballot box. If I just go by Lou’s announcement, and the New Year’s Day timing of it – I am not sure he gets that.

“I want someone in this role that cares about nothing but raising money and winning elections. This is a tough state for Republicans to do that. We need a professional organization at 10 Water Street. At the end of the day, I just hope that’s what we get.”