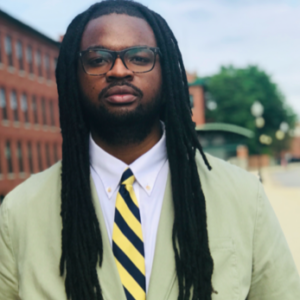 ‘It Hurt to Hear Those Words:’ Ryan Terrell Talks About Being Called a ‘Token’ By Dem Volinsky

Ryan Terrell, 29, was nominated by Gov. Chris Sununu to the state Board of Education to fill a vacancy left by Helen Honorow of District 5. His nomination was rejected by the executive council in a 3-2 party-line vote. Democratic Executive Councilor Andru Volinsky, a candidate for governor, called Terrell’s nomination “demeaning” and used the word “tokenism” to describe the African-American nominee’s pick for the post.

New Hampshire Journal sat down with Terrell to discuss his experience with the executive council.

NHJournal: First, could you tell us about your education experiences?

Terrell: I was attending a charter school in New Orleans prior to Hurricane Katrina. After Katrina, I ended up going to three different high schools in two different states before ultimately graduating from Dutchtown High School outside of Baton Rouge, Louisiana, in 2009.

I went to the University of Louisiana at Lafayette for my freshman year, then wound up returning home to help my mom financially. I worked a construction job for about a year until I came across an opportunity through Southern New Hampshire University called “College Unbound.” SNHU was looking to create its first cohort of College Unbound students, so I moved to New Hampshire in 2011 and received a Bachelor’s degree in Integrated Studies. I took political theory classes, law classes, business classes.

For the other half of my program, I did internships in the community. I interned with Anagnost Companies for quite a while and also interned with Stark Brewery in Manchester, participating in some business activities there.

NHJournal: What kind of business would you say you are in now?

Terrell: I am currently working as a project manager at one of Anagnost Companies’ subsidiary companies, Evolve Salon Systems, which is a national haircare distribution company. We recently began to produce disinfectants and hand sanitizer in response to COVID-19.

I would say I’m in the managing systems business. As a project manager, I’m involved with every major initiative that we have in our company, whether it’s in our distribution model or even down to some of the more creative aspects that deal with our brands and manufacturers.

NHJournal: We saw the letter you sent to Gov. Chris Sununu asking to be considered for a position on the state Board of Education. Why did you want to serve there?

I have a very personal understanding of how uncertainty impacts a K-12 education and what can be done to overcome those challenges.

Plus, most people in my family have an advanced degree. When my mother was getting a Master’s degree in child development and education, I used to be her test baby in her classroom. I literally grew up in a classroom.

Education, as I said in my letter to the governor, is something that’s very important to who I am.

NHJournal: Councilor Volinsky said that Governor Sununu’s decision to nominate you was “demeaning” and “tokenism.” What are your thoughts about that?

Yes, he said he thought I wasn’t qualified, but to hear “tokenism” really hurt me.  Because I didn’t see the word ‘token’ as it related to [Volinsky’s] concerns with my lack of experience, but representing who I am as a person in a way for him to see it as demeaning for me to be nominated.

NHJournal: Do you think you would be treated this way if you weren’t African American?

Terrell:  I will say that on the outset of answering this question, I’ve never experienced discrimination or racism in the state of New Hampshire that I’ve been aware of. New Hampshire has truly wrapped its arms around me and called me its own since I’ve been here. I knew that I was a true Granite Stater when “wicked” became a part of my regular vernacular.

The comment about ‘tokenism’ was alarming to me because, in the conversations leading up to my nomination, race was never a part of it in the slightest. It was all about my diversity of experience and diversity of thought.

NHJournal: About that diversity of experience. It’s somewhat surprising that the Democrats on the executive council would reject you at a time when our traditional education model is under so much strain due to COVID-19, and the need for alternative education strategies is at an all-time high.

Terrell: I too found that very surprising. My personal feedback is that in any system that I’m a part of, I look to see how we can improve it. As you said, with COVID-19 changing how we look at education, I was shocked that this was not a part of the reasoning or consideration by the councilors for my nomination.

I pride myself on having a technical understanding and getting insights from everyone involved in the system and being able to grow it based on considering innovative solutions. That fact was not a topic of discussion at all among any of the councilors. It was really disheartening for it instead to be about race. Extremely disheartening, but also eye-opening for a person who has never been a part of the process before.