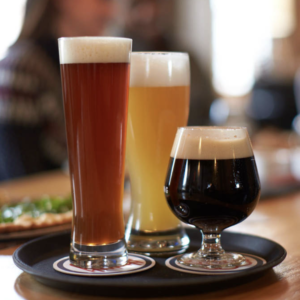 How NH Hurts Craft Brewers — and Consumers — to Protect Other Businesses

Allegedly, state alcohol regulations are justified by the need to protect the public. Yet many of the laws that prevent the growth and expansion of craft breweries in New Hampshire are not remotely related to public health or safety. Their one and only purpose is to protect other industries from competition.

Senate Bill 125 would make four changes to the state laws that regulate craft breweries. In each instance, the law that would be changed exists not to protect the public, but to protect restaurants, retailers, beer distributors or large breweries. (Note: Brewers are divided by law into nano breweries, brew pubs, and “beverage manufacturers.”)

1. State law prohibits New Hampshire beverage manufacturers (but not nano breweries or brew pubs) from selling more than a single 15.5 gallon keg “or the equivalent of one case of 12 ounce containers per person per day” directly to a member of the general public.

You can walk into a supermarket or convenience store and fill your full-sized, carpeted 1970s van with as much beer as it can carry, and joyfully tap your fuzzy rear-view-mirror dice all the way back home to your sitar jam session. But it’s illegal to do exactly the same thing at a craft brewery that makes more than 2,000 barrels of beer a year. (The van might also be illegal, but that’s another topic.)

Imagine a nano brewery, a brew pub, a “beverage manufacturer” craft brewery, a convenience store and a supermarket lined up side by side on one city street. Right now you can stop at four of the five and buy as much beer as you want. But at the larger craft brewery, you can buy only one case of beer per trip.

What’s the point of this law? Obviously, it isn’t to protect the public from consuming too much beer. You can buy as much beer as you want at any licensed retailer other than a larger craft brewery. Its only purpose is to force consumers to buy beer at other retailers.

Nano breweries and brew pubs are exempt from this prohibition apparently because they were added to statutes later and the ban was either inadvertently or deliberately left out of their regulations.

SB 125 would strike the prohibition, allowing people to decide for themselves where to buy more than a single case of beer.

As a result, Granite Staters who would like to order beer from home are banned by their own state from giving their business to local brewers. This harms consumers and in-state brewers — but helps beer retailers and distributors, as well as out-of-state brewers.

SB 125 would remove this prohibition and let all types of in-state brewers, as well as wineries, deliver straight to consumers.

3. State law further forbids New Hampshire breweries from opening their own stand-alone retail locations to sell beer directly to consumers. Again, there is no public health or safety justification for this law. People can buy beer by the full-size ‘70s van load from convenience stores, grocers and supermarkets.

The only possible reason for banning brewery-owned retail stores is to deny consumers an alternative to their local supermarket or convenience store (which are supplied by independent beer distributors).

SB 125 removes this prohibition and lets brewers set up their own retail outlets.

In Tuesday’s meeting of the House Commerce and Consumer Affairs Committee, Rep. John Hunt, R-Ringe, assured the associations that the bill would be amended to limit brewers to a single retail outlet.

SB 125 also would seem to prohibit brewers from joining together to jointly open a retail outlet. N.H. Liquor Commission officials believe the bill prohibits partnered outlets, which means this is how the law would be enforced.

How this prohibition protects consumers is anyone’s guess. But it would increase costs for breweries and limit their retail options, further benefitting beer distributors and other beer retailers.

There is no discernible public interest in limiting brewers to a single retail outlet or prohibiting them from partnering with other brewers to open stores. Any such prohibition would exist solely to protect other businesses from competition — which, of course, would hurt consumers and brewers.

This prohibition doesn’t reduce the amount of beer available to consumers. Grocery shelves are fully stocked with beer made outside New Hampshire. The effect of this law is to make it harder for New Hampshire’s smallest breweries to scale up, which benefits larger brewers.

SB 125 would remove this prohibition and allow brewers to enter into brewing contracts with each other. However, it comes with several restrictions.

It states that a “contract brewer shall not deliver beverages to on-premises and off-premises licensees within the state.” The small brewery could hire a larger brewery, but only to make the beer. Then the small brewery would have to pick up the beer and deliver it, or pay someone else to do so. Again, this restriction features no public health or safety benefit.

The bill also prohibits nano breweries and brew pubs from reducing their on-site output when they contract with another brewer. In other words, contracting can be done only to increase total production, not to replace any portion of existing production.

So if a brew pub or nano brewery contracts with another brewer to expand production, it had better not have an accident, owner illness or any other misfortune that causes on-site production to drop. That would put it in violation of the law.

When legislators belatedly passed laws that allowed Granite Staters to start small breweries and brew pubs (which were already flourishing in other states), they imposed thick layers of regulations, many of which protected other industries that were afraid of the competition. SB 125 addresses only a few of these.

Largely because of legal barriers, New Hampshire’s craft brewing industry lags far behind many other states, including the People’s Republic of Vermont.

Vermont, of all places, relaxed some of its beer manufacturing restrictions in the 1980s, sparking the growth of an industry. It has 77 craft breweries compared to New Hampshire’s 93, according to data kept by the national Brewers Association. But with less than half of New Hampshire’s population, Vermont has 15.4 craft breweries per 100,000 people over age 21 vs. 8.8 for New Hampshire.

In craft brewing circles, Vermont is legendary. It was an early adopter of craft brewing. New Hampshire has played catch up with Vermont for years.

Brewers in both Vermont and Maine have fought protectionist and prohibitionist laws. But in at least some cases those laws were loosened earlier there than in the “Live free or die” state.

For years, New Hampshire’s overly restrictive laws have needlessly hindered the growth of the local craft brewing industry. Most of those restrictions are pure protectionism for other industries.

Legislators deliberately handicapped craft breweries to protect restaurants, retailers and beer distributors. Those protections have made it harder than necessary for New Hampshire brewers to grow and to reach consumers.

One consequence is that Portland, Maine, and all of Vermont are better known as craft beer destinations than New Hampshire, though the Granite State has some excellent and award-winning breweries. By restricting the growth of one industry, protectionist laws have given our neighboring states a small but noteworthy competitive advantage in both tourism promotion and the recruitment of young professionals.

Laws should favor free and open competition, not one industry over another. The laws that regulate New Hampshire craft breweries ought to facilitate innovation, creativity, experimentation and economic growth. Too often, they do the opposite.