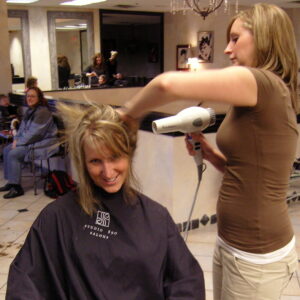 One of the hottest beauty trends of the last few years is the blow-dry bar. These semi-salons offer rapid hair styling services for a night out or a special event. But their expansion in New Hampshire is restricted because of the state’s outdated occupational licensing laws.

To open a shop that offers hair washing and drying, and maybe some makeup application as well, one must have a full cosmetology license.

The training requirements for those licenses are expensive, time consuming and entirely unnecessary for niche beauty services such as hair washing or makeup application.

Those requirements are excessive. (Massachusetts requires 1,000 hours of training) They’re ludicrous for someone who just wants to apply makeup or wash hair for a living. Yet that’s the law.

The bill would make it legal to offer “blow-dry styling” (which includes “shampooing, conditioning, drying, arranging, curling, straightening, or styling hair”), eyelash extension application, makeup application, and eyebrow threading without having to get an expensive state license.

These are safe, common practices that people do for themselves, their families and their friends every day. None involves chemical agents or specialty tools that require advanced training.

The bill also would exempt makeup application and similar cosmetic beauty services from licensure when offered for demonstration (at a department store makeup counter, for example) or for theatrical, photographic, television and media appearances.

New Hampshire is one of only 10 states without such licensing exemptions. Every bordering state offers at least some of these exemptions.

Here’s an example of the absurdity of New Hampshire’s current cosmetology license requirements:

It would be silly to claim that Bernie’s health and safety were put at risk by unlicensed Vermont makeup artists. But the health and safety claim is what has kept New Hampshire from carving out sensible exemptions for simple services such as applying powder for TV hits and makeup for actors, or hair washing services at a blow-dry bar.

Licensing regulations vary by state, sometimes by a lot, sometimes a little. New Hampshire law allows barbers and cosmetologists licensed in other states to practice here, provided that the other state’s license requirements are “substantially equivalent to or higher than” New Hampshire’s.

Pauer has a bill to change that too. HB 1560 would strip this subjective equivalency language and let practitioners licensed in other states practice here.

Maine, Vermont, and Massachusetts require 1,000 hours of training. Connecticut and Rhode Island require 1,500 hours. But some other states have hours requirements that might just miss being deemed “substantially equivalent” to New Hampshire’s.

Oregon, for example, requires 746 hours of training, with 465 of those being in practical operations.

The subjective language in New Hampshire’s statute is unnecessary. Stripping it would leave the requirement that the applicant be “similarly licensed in another state,” which is sufficient.

The changes proposed by both of these bills would remove license requirements that aren’t necessary and that can serve as a barrier to entrepreneurship (in the case of HB 1171) and the in-migration of licensed professionals (in the case of HB 1560).

With New Hampshire’s severe labor shortage, reducing needless barriers to entering the state’s labor market is an easy call, and one that comes with a greater sense of urgency than it has in a long time.

This article originally appeared at JBartlett.org.