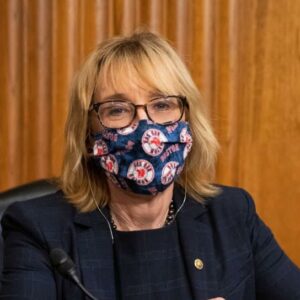 Why surprising? Because they are almost certain to hurt her with voters in November.

On Tuesday, Hassan released a statement decrying the “deadly and addictive” fentanyl that is “devastating communities in New Hampshire.”

And, Hassan added, “to save lives, we must stay laser-focused on disrupting the flow of these deadly drugs from China and Mexico to the U.S. across our borders.” We must “ensure that law enforcement has the resources and authorities it needs to prevent fentanyl trafficking at the U.S.-Mexico border,” Hassan added.

It is a bold statement from a Democrat who served on the Homeland Security Committee as illegal immigration has soared to record highs. In 2021 alone, there were a record 1.9 million illegal immigrant “encounters” at the southern border — the entire population of New Hampshire, with Boston thrown in, too.

A lawsuit from Republican attorneys general forced the Biden administration to admit it released more than 400,000 of those illegal aliens into the U.S.

Hassan supports an amnesty program (“pathway to citizenship”) and she opposes deporting people who come to the U.S. illegally. She believes only illegals who have committed an additional crime or pose some other threat should be forced to leave.

Hassan repeatedly voted against funding a border wall, and she voted against increased interior enforcement, too. She also backs a new Biden proposal to place hundreds of migrants caught at the U.S.-Mexico border on house arrest in American cities like Baltimore and Houston.

Not surprisingly, Republicans called her out.

“Maggie Hassan’s vote to fund President Biden’s ‘house arrest for illegal immigrants’ plan is dangerous and insulting to those of us begging for real border security,” said state Sen. Chuck Morse (R-Salem). “The president is actually proposing that we provide free housing & benefits to those who came here illegally for up to four years pending trial. Meanwhile, Maggie Hassan is ignoring the housing crisis that has left young families struggling to find affordable housing options.

“If Granite Staters didn’t realize how important that 51st vote in the U.S. Senate is, this should be a real eye-opener.”

Morse is facing off against retired Gen. Don Bolduc and Londonderry Town Manager Kevin Smith in the GOP primary.

Then on Wednesday, Hassan announced she was joining with Sen. Mark Kelly (D-Ariz.) and calling for a federal gas tax holiday, “temporarily suspending the federal gas tax through the end of the year, bringing much-needed economic relief to families across New Hampshire.”

“People are feeling a real pinch on everyday goods, and we must do more to help address rising costs, particularly the price of gas,” Hassan said in her press release. “We need to continue to think creatively about how we can find new ways to bring down costs.”

Given the surge in home heating costs this winter — some Granite Staters are seeing price hikes of more than 50 percent on propane — it is no surprise Hassan is worried about how the issue will hurt her. Biden has firmly staked out his party’s position on fuels like oil and natural gas that New Hampshire homeowners rely on: He opposes more domestic production.

Hassan said in an interview with a Boston TV station Wednesday she believes the green energy programs she has voted to fund with billions of dollars will bring costs down in the long term. And she may be right.

But there is no doubt that canceling the Keystone XL pipeline and joining the Regional Greenhouse Gas Initiative cap-and-trade system –both of which Hassan supports — put upward pressure on energy costs now. She has also opposed increasing the natural gas supply coming to New Hampshire.

“This is the height of election year gimmickry,” Smith said of her call for a gas tax holiday. “Gas prices are skyrocketing because of the Biden administration’s reckless policies that Maggie Hassan supports. We need a senator who will make the United States energy independent again – Maggie Hasn’t – I will.”

Republicans noted Hassan just voted for a massive $1 trillion infrastructure bill and now she wants to temporarily roll back the 18.4 cents per gallon federal tax to help cover the costs. The result would be to add even more to the $30 trillion federal debt.

And the Senate Leadership Fund (SLF) jumped in, too, releasing video of then-Gov. Maggie Hassan signing a $30 million state gas tax hike into law in 2014.

“Maggie Hassan is changing her tune on the gas tax now that she’s a vulnerable senator who reliably supports Washington Democrats’ agenda. This is a transparent political stunt that does nothing to absolve Hassan for her free-spending votes that caused the prices of goods to reach record highs in the first place,” the SLF Communications Director Jack Pandol said.

So why fight on enemy territory? Why talk about issues where you’re vulnerable, like the border and energy? If the Democrats’ theory is that social issues like abortion and school mask mandates will drive up turnout in November, why not stick with those?

“She’s trying to insulate the attacks she knows are coming,” says GOP strategist Pat Griffin. “The problem for her is that these are pocketbook issues, they hit voters in real-time.”

“Can you imagine her trying to defend her positions on energy in front of a local Rotary or a Chamber crowd? These talking points will get groans from real people in New Hampshire.”