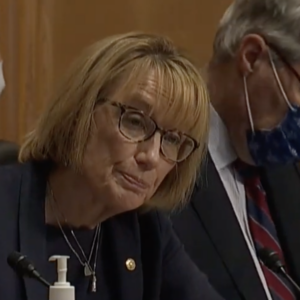 If Sen. Maggie Hassan hopes to simply hide from the border crisis issue in her 2022 campaign, Tuesday was a reminder of how just how forlorn that hope may be.

The first-term senator was greeted Tuesday morning with the news Biden’s Department of Homeland Security is flying illegal immigrants from Mexico to the Northeast in the dark of night. The New York Post report echoes a recent NHJournal story about DHS discussions of bringing migrants to the sector that includes upstate New York, Vermont, and northern New Hampshire.

Hassan, who sits on the Homeland Security Committee, declined to respond to questions about that report or whether she would use her position on the committee to keep DHS from doing the same in New Hampshire.

Later Tuesday morning, Hassan attended a Senate Finance Committee hearing on the nomination of Tucson Police Chief Chris Magnus to lead the Customs and Border Protection agency. Magnus is a controversial pick who, as police chief in Richmond, Calif., ordered his officers to ignore ICE detainers on criminal illegal immigrants.

Magnus faced some tough questions on that and other issues from Republicans on the committee, but none from Hassan. She had no questions about his support of sanctuary city policies or his plans to address the surge of more than 1.4 million illegals across the border since Biden took office.

Instead, she asked him about counterfeit goods and illegal drugs crossing the border, as well as expressing concerns about the economic impact on New Hampshire of the recent closing of the northern border.

Polls have consistently shown Americans overwhelmingly oppose Biden’s handling of the border. In a new Quinnipiac poll, also released Tuesday, Republicans named immigration as their top issue, and it was tied for second place (with COVID-19) among independent voters.

Hassan has repeatedly voted against funding a border wall, and she voted against increased interior enforcement, too. She also opposed the “remain in Mexico” policy that drastically reduced illegal crossings during the Trump administration. The Biden administration is now bringing the policy back.

Hassan is almost certain to vote to confirm Magnus for CBP. She’s already expressed her support for amnesty (“a pathway to citizenship”) for people who came to the U.S. illegally. And she’s never expressed a single concern or asked a single question as a member of the Homeland Security Committee based on the premise that illegal border crossings are a “crisis.”

Also in the news Tuesday: Word the alleged rapist who attacked a woman on a Philadelphia commuter train while bystanders watched is in the U.S. illegally. He’s never been deported, despite a rap sheet that includes a conviction for sexual abuse.

All of which is a reminder that events can take an already hot issue like immigration and put it on the front burner anytime between now and Election Day.

Her one question on illegal immigration was whether he “agree[d] that individuals charged with serious crimes, not just those with prior convictions, can pose a threat to public safety” and that DHS personnel can detain individuals who are a threat to security or public safety. Chief Magnus agreed on both counts.

At first blush, it sounds like Hassan is promoting the idea of deporting people who have been charged — but not yet convicted — of a crime. For a Democrat, that’s pretty tough talk.

But in fact, people who are charged with serious crimes, including U.S. citizens, can already be detained. Hassan pointedly discussed detaining — rather than deporting — them.

And the entire topic is moot in sanctuary cities where local cops follow Magnus’ policy and refuse to cooperate with federal immigration enforcement. Earlier this year, Hassan voted against legislation to deny federal funds to sanctuary cities.

It’s possible border security and illegal immigration won’t be part of the 2022 election.

Possible, but not likely.