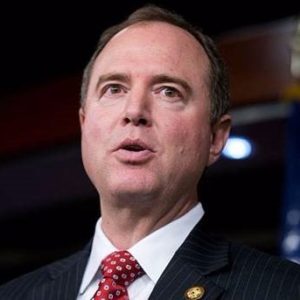 President Donald Trump has a litany of enemies, opponents and foils, but the name at the top of the list may well be California Congressman Adam Schiff. Or as President Trump called him on Twitter:

And now there’s speculation about a possible 2020 presidential bid, sparked in part by his new position as chairman of the House Intelligence Committee and the high-profile platform it provides. But also by the announcement that Schiff is scheduled to appear at the Politics and Eggs breakfast in New Hampshire today.

The event, co-hosted by the New England Council and the New Hampshire Institute of Politics, is a mandatory campaign stop for virtually every major-party POTUS candidate in the Granite State. So is Rep. Schiff running? 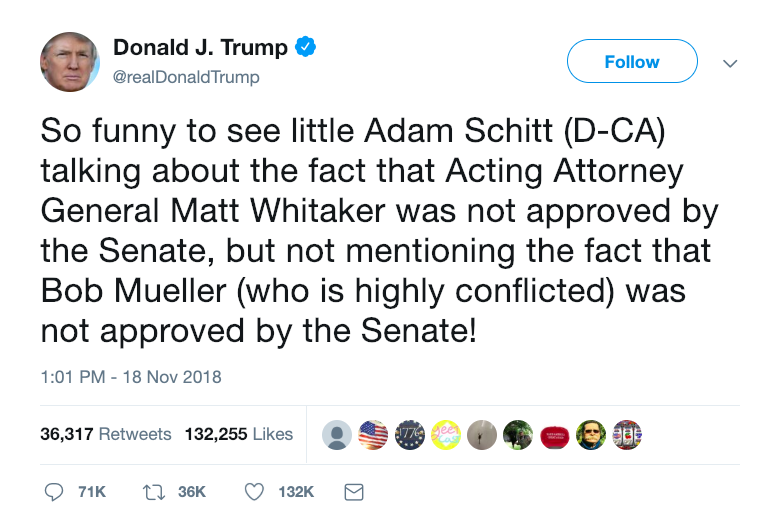 He was asked that question while campaigning for Democrats in New Hampshire last October.

“I would never say never to something,” Schiff said at the time “It’s fun coming up here, and I enjoy the idea that I might cause certain heads at Fox News to explode [if I ran.]”  According to the L.A. Times, “it’s a horribly kept secret in Washington that Schiff is interested in a higher position. The question is what role that might be, and whether Schiff will risk his safe House seat to try for something bigger.”

And if Schiff does decide to run, he’s already got $4.6 million cash on hand in his congressional campaign fund, according to OpenSecrets.org.   His campaign claims he gave more money to Democratic candidates in the 2018 cycle than any member of Congress who wasn’t in a leadership position. And the person Schiff can thank for all that campaign cash is Donald Trump.

And Schiff has reveled in the role. After President Trump tweeted out his “Adam Schitt” insult, Rep. Schiff replied:

“Wow, Mr. President, that’s a good one. Was that like your answers to Mr. Mueller’s questions, or did you write this one yourself?”

Schiff’s twitter feed reads like a page from the #Resist action network. Tweet after tweet attacking Trump over the Russia probe and White House policies, along with a generous serving of personal attacks against Trump’s character. 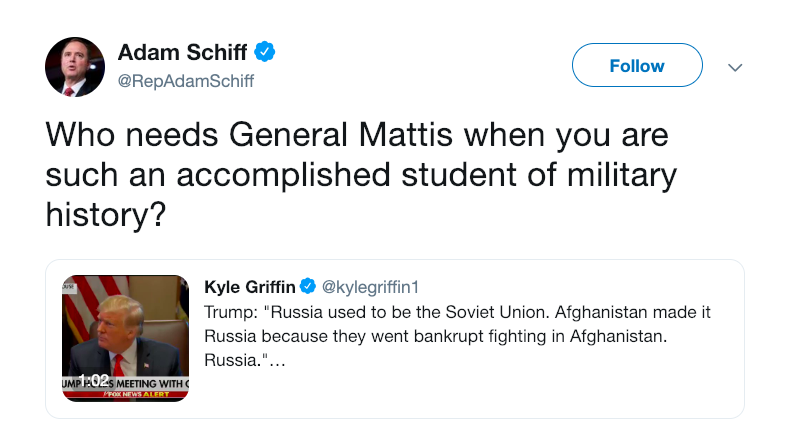 This plays well with the #NeedToImpeach segment of the Democratic base, and with liberal billionaire and impeachment advocate Tom Steyer (a fellow Californian, by the way) out of the race, those voters may well be looking for a “take it to Trump” battler whose key connection to 2020 politics is investigating the president.

In neighboring Massachusetts, for example, Steyer’s launched an ad buy in the district of Rep. Richard Neal, chairman of the House Ways and Means committee and a key player in any future impeachment effort.  Steyer also reported plans to send out staff to canvas in Neal’s district and will be in Springfield, MA on Feb. 12 for a pro-impeachment town hall.

Interestingly, Schiff has not been an impeachment advocate himself, saying earlier this month that he expected President Trump to be voted out of power, rather than removed by Congress. “I presume it ends with Donald Trump being voted out of office, but Bob Mueller will have a lot to say about that,” Schiff said.

So will he run? Asked today whether he was testing the waters, Schiff said “No. I had a chance to go there last year. I’ve been invited back and I’m looking forward to it.”  But his decision to return to New Hampshire for such a high-profile political event, is an indication the door isn’t completely closed.

Neil Levesque, executive director of the New Hampshire Institute of Politics, tells NHJournal that “Schiff’s role as chairman of the Intelligence Committee might be good for his chances in a presidential race.” One comparison that comes to mind is another California congressman, Richard Nixon, who was able to use high-profile investigations to launch what would become a national career.

Mike Dennehy, a New Hampshire GOP strategist who worked Sen. John McCain’s presidential campaigns, agrees. “As the Chair of the House Intelligence Committee, Schiff is always in the news attacking President Trump.  That gives him instant credibility with the Democrat base,” Dennehy told NHJournal.  “He can run and connect with liberal Democrats on the fake “Russian collusion” issue straight through to Caucus and Primary Day.”

But there is a downside, both men note. “At the same time, you have to wonder how his fellow Democrats in Congress are going to feel about that,” Levesque said. “Running for president while you’re investigating Trump is just handing the White House a talking point.”

“Would a Schiff presidential run help Trump by giving him the ‘He’s just running for POTUS!’ retort to every Intelligence Committee report? Absolutely,” Dennehy said.

On the other hand, New England College professor of political science Dr. Wayne F. Lesperance says “Schiff’s candidacy will not be made by his role on the intel committee.”

“He will need to establish himself as a bona fide and serious candidate for voters like the other challengers. What he does have going for him, and this is a big deal to democrats, is that he has demonstrated a willingness to fight with the President. And I’d say voters place a premium on their nominee being a brawler,” Lesperance says.