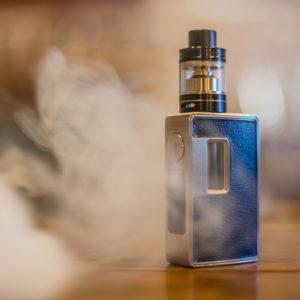 Cigarette use in the United States is at its lowest point in years, and the CDC says that the Northeast has the second-lowest percentage of smokers in the country. Still, millions of American adults are smokers, as are about 1 billion people around the planet.

In New England, both New Hampshire and Maine have higher rates of lung and bronchial cancer, both of which are primarily caused by smoking, than the rates in Massachusetts, Connecticut Rhode Island and Vermont.

So what is the solution to getting people off of cigarettes?

Some doctors are starting to see the benefits of vapes and e-cigarettes as harm reduction measures. People aren’t addicted to cigarettes, they’re addicted to nicotine.

That’s the take from Dr. Daniel Wikler, a Harvard Professor of Ethics and Population Health.

“These e-cigs offer an opportunity to escape the one in two chance of death from smoking for a lot of people who otherwise would not be able to just give up cigarettes,” Wikler told NHJournal during a roundtable hosted by InsideSources.

“Some version of an e-cig or an alternative nicotine delivery device that doesn’t involve smoking should be seen as a public health tool,” said Wikler. “It’s not a vaccine, but it’s another one of these tools that we can use to save huge numbers of lives that otherwise would be lost and not for any corresponding benefit.”

“We should pursue the development of these devices so that they’re attractive to more people. If they have to be flavored, they should be flavored, whatever it takes to convince each person who would like to give up smoking.”

Some aren’t taking his advice. In Maine, the state legislature is looking to ban the use of any flavored nicotine products. The legislation is widely expected to pass, and Democrat Governor Janet Mills has already set aside $32 million in her yearly budget to offset the lost revenue stream.

Jeannie Cox, a lifelong smoker in her seventies, was also part of the roundtable. She told the story of how she was able to quit smoking after hearing about e-cigarettes in an ad on the radio.

“I grew up during the time right after World War II where everybody smoked. Both sides of my family were military, everybody smoked,” said Cox. “The government handed out cigarettes to the military. Doctors smoked, teachers smoked, you could smoke anywhere. So I smoked, I started around 15, 16 years old.”

“I watched a lot of friends and family try quitting over and over again. I said, I’m not up to that disappointment. I heard about these cigarette-looking things over the radio and I thought, well I might try that.”

That was nearly a decade ago, and Cox is still vaping. She said she prefers the fruity flavors that Maine is likely going to ban.

Dr. Michael Cummings of the Hollings Cancer Center at the Medical University of South Carolina, another panelist, agreed with Wikler that e-cigarettes are less harmful than traditional cigarettes.

“Tobacco control successes are working primarily in preventing young people in high-income countries from taking up tobacco. They’re rejecting cigarette use. They are taking up vaping,” said Cummings. “Maybe that’s a good trade off, I wouldn’t recommend it. We don’t want kids to use any nicotine, but if you had to pick one of the types of nicotine products, you don’t want to go to the Marlboros.”

As to what it will take for e-cigarettes to be seen as harm reduction products, Cummings has a simple solution.

“For our government agencies to endorse them as less harmful than [traditional cigarettes]. And that’s not happened.”

Cummings doesn’t believe that e-cigarettes are a solution to a tobacco-free world, but they are a good first step.

“I mean, there’s uncertainty. We don’t know what the long-term risks of these products are. I think it’s likely going to be less than cigarettes. It’s hard to get worse.”