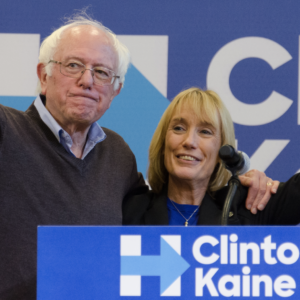 As the 2022 election approaches, Republicans are taking issue with Sen. Maggie Hassan’s claims of bipartisanship, noting that she overwhelmingly votes with her party’s leadership and most progressives.

Hassan, on the other hand, insists she’s a Democrat who works across the aisle. So much so that, in the past month, her office sent out twenty-four press releases featuring the word “bipartisanship” — four of them in just one three-day period alone:

But just how often does the first-term Democrat actually reach across the aisle? According to the National Republican Senatorial Committee, not very.

The NRSC included her on a list of Democrats in competitive 2022 races who, they claim, have loyally followed the party line, pointing out she voted with Senate Democratic Leader Chuck Schumer (D-N.Y.) 98 percent of the time. They also noted Hassan voted with socialist Sen. Bernie Sanders (I-Vt.) 96 percent of the time.

“It didn’t take more than 100 days and 140 votes for the Senate’s most vulnerable members to show their true colors, voting in virtual lockstep with both Chuck Schumer and Bernie Sanders,” said NRSC Chairman Rick Scott. “It’s clear that the Democrats believe that socialism is their ticket to victory in 2022. They couldn’t be more out of step with voters in their states and we will spend every single day telling voters about their wildly socialist progressive agenda that will kill jobs and destroy our communities,”

The NRSC cited a CQ Roll Call vote comparison report from Monday that found, 98 times out of 100, Hassan voted with Schumer.

Hassan and her communications staff declined to respond when asked about her voting record. However, some political observers say the charge of partisanship means less at a time when both parties are polarized and true bipartisan lawmaking is rare.

“I’ve got two words for that,” says GOP strategist Patrick Griffin. “‘Joe Manchin.’ There is no reason Hassan couldn’t be doing what Manchin is doing right now — confronting the far-left in her party and using her leverage to push back on issues like gun control or tax hikes or protecting New Hampshire’s elections.”

Hassan has touted her relatively high ranking from The Lugar Center at Georgetown University, which annually releases a “Bipartisan Index” of the current members of Congress.

Their most recent Senate rankings ranked Hassan 2oth in the 100-member chamber. (Sen. Jeanne Shaheen was 30.) However, the Lugar Center doesn’t measure votes, it counts legislative sponsorships. According to Lugar, “The Bipartisan Index measures the frequency with which a Member co-sponsors a bill introduced by the opposite party and the frequency with which a Member’s own bills attract co-sponsors from the opposite party,”

Similarly, Govtrack ranks Hassan’s bipartisanship 14th in the country, using a similar methodology as the Lugar Center. Remarkably, Govtrack gave Sen. Rand Paul of Kentucky, a staunch libertarian not known for his bipartisan credentials, a higher ranking than Hassan.

The difference is methodology. Congress introduces tens of thousands of bills each year, but only a few actually end up being voted on or signed into law.  Take the 116th Congress, for example, its most recent full session. According to Govtrack, nearly 17,000 bills were introduced during its two years. Issues ranged from far-reaching stimulus and appropriations bills to re-naming local post offices. Only 344 pieces of legislation were actually signed into law.

During that same period, Hassan voted with her party’s leadership nearly 100 percent of the time.

Clearly, says Griffin, Hassan thinks she has a problem. “You don’t send out 23 press releases about bipartisanship if you’re not worried,” he said. “And based on her record — and the fact that she’s the most vulnerable Democrat in the U.S. Senate — she should be.”