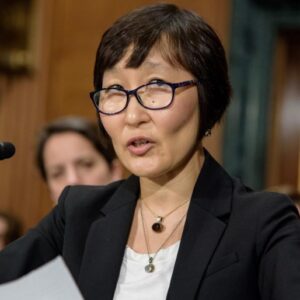 In a newly-uncovered video, President Joe Biden’s nominee to help oversee the nation’s banking system says that if small U.S. oil and gas companies went bankrupt, that would be a good thing.

It’s a suggestion that in the current climate — gasoline prices soaring and some consumers looking at 50 percent hikes in energy costs this winter – may not be such a “good thing” for getting her nomination through a 50-50 Senate.

Saule Omarova, tapped by Biden to run the Office of the Comptroller of the Currency, has been embroiled in controversy since her nomination was first announced. While she did hold a minor role in the George W. Bush Treasury Department, her economic resume is nontraditional at best.

While a student at Moscow State University (Moscow, Russia, not Moscow, Idaho) where she was a “V.I. Lenin Personal Academic Scholarship” recipient, Omarova wrote her thesis on “Karl Marx’s Economic Analysis and the Theory of Revolution in The Capital.” Now that she’s been nominated to one of the top financial positions in the administration, Republican senators like Pat Toomey, a Pennsylvania moderate, want her to release a copy as part of the vetting process.

Thus far, she has refused.

“Republicans will overwhelmingly oppose this self-described radical,” Toomey said last month. Professor Omarova “has been celebrated on the far left for promoting ideas she herself has described as radical,” including advocating for “effectively end[ing] banking as we know it.”

Her views are so extreme, the New Hampshire Banking Association sent a letter to Sens. Maggie Hassan and Jeanne Shaheen expressing their concerns about the nomination.

“Given the important role that the OCC plays in our country’s banking system, we believe that Senators should be aware of Dr. Omarova’s published policy viewpoints that would fundamentally transform the regulatory structure and the industry she is being nominated to supervise,” wrote N.H. Banking Association President Kristy Merrill. “Among the most concerning of her views is her proposal to eliminate the community banking model by relegating them to pass through entities that would hold deposits on behalf of the Federal Reserve. We believe banks have played a key role during the past 18 months in supporting individuals and businesses in an economic recovery and continue to do so.”

“Here what I’m thinking about is primarily coal industry and oil and gas industry,” said Omarova in a video clip unearthed by American Accountability Foundation (AAF). “A lot of the smaller players in that industry are going to probably go bankrupt in short order — at least, we want them to go bankrupt if we want to tackle climate change.”

Omarova went on to say that “we cannot afford” the economic fallout and job losses that would ensue if the U.S. were to bankrupt oil companies. But given her progressive politics — she’s proposed having all private bank deposits go to the federal government in order to “democratize money” — her sentiments are hard to ignore.

“This is ludicrous,” says Dan Weaver, president and executive director of Pennsylvania Independent Oil & Gas Association, a membership organization with businesses large and small, some of them family-owned operations. “That idea is preposterous and sickening, to say the least.

“This is a reminder that there are opponents of oil and gas who are in high positions or seeking high positions in the Biden administration,” says Dan Kish of the Institute for Energy Research (IEA) and American Energy Alliance (IER). “I think people see that at the pump. They’ve seen reports that they’re going to pay more this winter.”

The timing of the new revelation is problematic for Biden and his Democratic allies. The White House has taken several high-profile actions to discourage domestic fossil fuel production, even as consumers have been hit with higher gasoline prices and warnings that home heating costs this winter will soar.

The Biden administration even asked OPEC to increase production to help people dealing with high gas and heating oil prices. OPEC declined, leading critics to say the administration should rethink its steps against domestic oil and gas production.

“We’ve already seen Keystone XL pipeline workers lose their jobs, we’ve seen people’s businesses and their family budgets hurt by higher gas prices and ultimately that’s the game,” says Kish. “The game is to drive energy costs to skyrocketing levels and make it very difficult for people to use a kind of energy they use in the hopes that they’ll go and use the stuff that they want to use.

All things considered, Kish says it does not surprise him that somebody connected to the Biden administration feels this way about oil and gas.

“What surprises me is that she mistakingly said it publicly, or at least in a way that became public,” says Kish. “I don’t think she expected it to become public.”