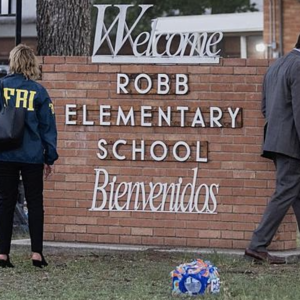 As an angry parent, fed-up political junkie, and sick-and-tired citizen, I’ll tell you why:

Because we can’t fix anything.

Fix America’s gun problem? There are an estimated 400 million guns in America right now in the hands of a nation with a culture of violence going back at least 300 years. And we’re going to “fix” mass shootings and gun crime?

Everybody knows America’s postal service is an obsolete anachronism from the pre-internet era, that driving around house-to-house six days a week to put pieces of paper into a metal box is a ridiculous waste of time and money. But just weeks ago we “fixed” it by committing more than $100 billion in taxpayer dollars to keep the rickety system running.

The point is not to pick on your local postal workers. The point is ending Saturday mail delivery should be simple. It is a picayune problem in our world of COVID, Ukraine, and school shootings.

But our politics are so broken we can’t get that done. And you want to solve the problem of gun crime?

America at the moment is out of the problem-fixing business. We’d rather “fight” than “fix.”

One reason is our lack of faith in our would-be “fixers.” As we learned the hard way during the COVID-19 era, America’s current crop of “elites” — the technocrats, bureaucrats, and politicians who are supposed to be in the solution business — are lousy at their jobs.

The Center for Disease Control and Prevention might have many fine abilities, but “controlling and preventing disease” isn’t among them. The Food and Drug Administration’s mishandling of COVID tracking and testing made the pandemic worse, not better.

And the political class demonstrated again and again, from mask mandates to school lockdowns, that it is impervious to data. Did it matter that keeping kids at home was an educational disaster that set back a generation of disadvantaged children? Not a bit.

It was far more important for our elites to virtue signal than problem solve.

And can you blame them? Where is the evidence that American voters are even interested in problem-solving?

Who are two of the hottest fundraisers in American politics right now? The far left’s Rep. Alexandria Ocasio-Cortez (AOC) and the far right’s Rep. Marjorie Taylor Greene (MTG). Both spout streams of extremist nonsense – from Modern Monetary Theory to “Jewish Space Lasers” – and the checks keep pouring in. Primary candidates covet their endorsements.

Setting aside how awful their ideas are, do either of these two even want political solutions? They’re fighters, not fixers.

One of the hope-inspiring stories emerging from the horrors of Tuesday’s crime is that the murderer was stopped by a Border Patrol agent who acted without waiting for backup.

Confronting school shooters isn’t technically a problem Customs and Border Patrol (CPB) agents are supposed to solve, but he did it anyway – and at the risk of his own life. The irony is his day job is to work on a problem we won’t let him and his fellow agents solve – the chaos at the border.

But are we “fixing” it? Is there any prospect of even considering a serious solution for our lawless, chaotic border?

No. Instead, we’re using a COVID health regulation to temporarily hold back a wave of migration the Biden administration knows is coming – and that is on top of April’s highest number of CPB “encounters” ever in a single month.

People – it’s a border. It’s not something impossible, like building a self-sustaining Mars colony or figuring out how to get your teens off Tik Tok. All 193 member states of the United Nations have borders, and few of them have the mess we do.

You want a relatively secure border? Put up some more walls, punish businesses that hire illegal immigrants, and deport people who aren’t supposed to be here. Then make it easier for legal immigrants to come here and eventually become Americans.

It won’t be perfect or impervious, but it will work. We just have to get it done.

Except – we are never going to do it. Team AOC will never accept deportations for immigration enforcement; Team MTG opposes immigration and businesses will stop writing checks to politicians if they lose their cheap labor.

And besides, there is a lot more political power from chants of “No More Deportations” and “Close the Border!” than from “We came up with a reasonable, bipartisan compromise that solved the long-term problem!”

What can we do about gun violence? Very little. But until we can stop fighting, stop turning political disagreements into character assassinations, stop declaring political compromise a crime — until we can stop making a virtue out of our willingness to commit rhetorical violence in the name of our petty partisanship — we won’t fix anything.