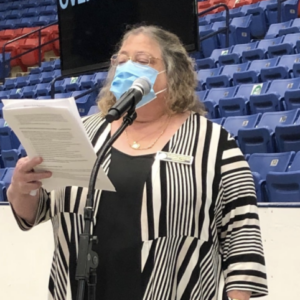 One of New Hampshire’s most outspoken school choice opponents stunned reform advocates Friday when she admitted she had pulled her son out of public school to attend a private academy because “he was experiencing difficulties.”

“It was good we had that option,” said state Rep. Marjorie Porter (D-Hillsborough).

Porter, testifying on behalf of legislation to block local tax revenues from funding Education Freedom Accounts, also invoked the notorious “Blaine Amendment” language in the state constitution to make her case before the Education Committee.

“This is our Blaine amendment,” Porter acknowledged. “It’s been called the ‘anti-Catholic amendment.’ I agree this is not nice, but nonetheless, it is still part of our constitution.”

Advocates for education reform were stunned.

“I’m sure Rep. Porter had good reasons for choosing a private school for her own child, and other families have good reasons as well,” said Jason Bedrick, Policy Director at EdChoice. “It’s a shame she’s seeking to deny families the same opportunities she and her children had.”

Porter was speaking on behalf of her bill, HB 1516, banning the use of tax revenue to fund EFAs that send money to religious institutions when she made the revelation.

“I certainly understand the need for families to find an alternative to public schools to meet the needs of their children,” Porter testified. “My own two children attended the same public school where I taught. My daughter was fine with it, but not so my son. He was experiencing difficulties, so we sent him to a local private school until he was middle school age. It was good that we had that option.”

She also told the committee her parents sent her and her sister to Catholic school in Worchester, Mass. in the 1950s to avoid the anti-Catholic bias the parents experienced in public school. And, she added, she and her husband ran a private school for 12 years.

“I have filed this bill because I believe the use of locally raised taxes to fund scholarships to religious schools is unconstitutional,” she stated. “The separation of church and state is one of the basic tenets of American democracy, as invaluable as Part One, Article 2-A of the New Hampshire Constitution about the right to bear arms.”

Porter’s stance highlights what supporters of EFAs and similar programs say is the hypocrisy of their opponents: They oppose letting low-income families use their children’s share of education funding to have the same choices they do. For example, while New Hampshire teachers’ unions are strident opponents of EFAs, multiple studies have found public school teachers are far more likely to send their children to private schools than their fellow parents.

What makes Porter’s case stand out is she admits her son was struggling in public schools and the private school met an educational need.

“I’m glad her family had those opportunities. Every family should seek out the best possible education options for their kids,” Corey A. DeAngelis, Executive Director of the Educational Freedom Institute, told NHJournal. “But she shouldn’t fight against school choice for others. Funding students directly would allow more families to access alternatives. School choice is an equalizer.”

Porter pushed back when asked why she would leave students like her son trapped in what she considered an inadequate education environment.

“Read the constitution, and perhaps spend some time harassing those reps who are advocating sedition,” Porter added, a reference to a handful of House Republicans who have proposed legislation for New Hampshire to secede from the United States.

Critics respond by noting the portion of the state constitution quoted by The Porter, also known as the “Blaine” amendment,” has been overruled by the U.S. Supreme Court. In Espinoza v. Montana Department of Revenue, the court ruled state “Blaine” amendments violate the free exercise clause of the First Amendment.

“State law can no longer provide an obstacle to the participation of religious schools,” according to Paul Clement, former U. S. Solicitor General.

The Blaine amendment is named for U.S. Rep. James Blaine (R- Maine), who pushed the law during a time of anti-Catholic bigotry after the Civil War. The amendments were designed to continue to fund Protestant-run public schools but ban money from going to Catholic counterparts.

One group that supported those amendments was the Ku Klux Klan, according to state Rep. Glenn Cordelli (R-Tuftonboro) who also serves on the House Education Committee.

“Hypocrisy runs rampant when it comes to education freedom,” Cordelli said. “It is amazing that New Hampshire legislators send their children to private schools — including religious schools — still use the ‘public funds for religious school’ argument. As mentioned in our hearing, they are well aware of the Espinoza ruling but choose to ignore it. They admit that our ‘Blaine amendment’ is the result of religious bigotry.

Porter is not seeking re-election.