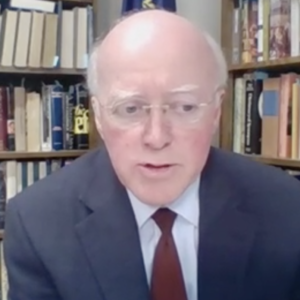 New Hampshire Secretary of State Bill Gardner didn’t mince words during a hearing on the Democrats’ proposed election law, calling it a threat to the state’s system and a federal “power grab” of the election process.

In a nearly four-hour hearing Tuesday, the Senate Judiciary Committee heard charged testimony from speakers like Gardner and failed Georgia gubernatorial candidate Stacey Abrams on H.R. 1, the massive election overhaul bill passed by the House on a straight party-line vote. The legislation is awaiting action by the Senate.

Gardner, a Democrat and the longest-tenured Secretary of State in the country spoke at length in opposition to H.R. 1, which he believes is a threat to local control of elections, and opens the door to the potential demise of New Hampshire’s First in the Nation presidential primary

“I am deeply troubled and concerned about the direction some in Congress would take the states in terms of the conduct of elections,” said Gardner in his opening statement. ”Unjustified federal intrusion into the election process of the individual states will damage voter confidence, diminish the importance of Election Day itself and ultimately result in lower voter turnout,”

“I believe this legislation [H.R. 1] will hurt voter participation in the states and especially in my state of New Hampshire,” Gardner added.

New Hampshire has had the third-highest voter turnout (measured by the percentage of voting age population) every two years since 2004. Democrats like Sen. Maggie Hassan, who supports H.R. 1, acknowledge the state’s success. Hassan argues that New Hamshire should surrender control of elections on behalf of other states where elections aren’t as well run.

“Would you agree with me that voters tend to turn out more for elections when they have more confidence that their vote will be counted appropriately? And what effect has your voter ID provision had on turnout?” Grassley asked.

“Absolutely. The trust and confidence voters have in the process is a huge boost to turn out,” Gardner said.

Gardner also has concerns with a one-size-fits-all approach to elections, in which the federal government mandates every state has the exact same election laws, even if those laws don’t work for their state. Senator Tom Cotton (R-AR), who introduced Gardner to the committee, questioned Gardner on the federalization of state elections.

“What do you think this federalization of our state-based election system would do to your elections in New Hampshire?” asked Cotton.

“Senator, it would be harmful to our elections in New Hampshire,” said Gardner.

“I don’t want Texas to have to be like New Hampshire or Arkansas or California, but why should we be made to be like California in particular?” said Gardner. “Understand we have a way of doing it that works for the people of New Hampshire. And the turnout is proof that it works and this kind of federal legislation is harmful for our way of voting,”

Earlier in the day, New Hampshire Democrats held an online event to push for the legislation. And despite the Granite State’s record turnout, they made the case that H.R. 1 is needed to battle voter suppression. “Anyone who has read the For the People Act understands that it’s about addressing the duel crises in our election systems – corruption and voter suppression,” said state Democratic Party chair Raymond Buckley.

Conservatives have slammed H.R. 1 as a “power grab” by the slim Democrat majority in Congress.  Senator Lindsey Graham (R-SC) asked Gardner if he believed that H.R. 1 “would be a power grab when it came to New Hampshire voting,”

None of the Democrats on the Judiciary Committee questioned Gardner during the hearing.