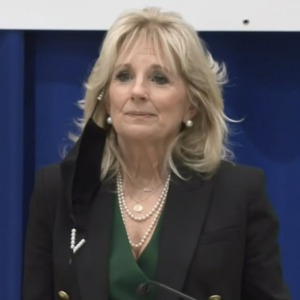 First Lady Jill Biden visited the Christa McAuliffe School in Concord Wednesday afternoon to pitch her husband’s $1.9 trillion COVID spending package, along with the administration’s school reopening strategy. The Concord stop was part of the White House’s “Help is Here” tour, with the president and members of his administration hitting the road to push the politics of his COVID spending plan.

Ahead of her remarks, Biden met with Judge Stephen McAuliffe, a Biden family friend and widower of Christa McAuliffe, a Concord teacher who died in the 1986 Space Shuttle Challenger disaster.  She also received the first-ever issued copy of the new Christa McAuliffe $1 coin from a CMS fourth-grader

“New Hampshire has the COVID support it needs” thanks to the American Rescue Plan, Biden said at the event.

A major theme of her short speech was the Biden administration’s stated goal of reopening schools within the first hundred days of his administration. “With the American Rescue Plan, help is here! We’re going to reopen our schools and we’re going to do it safely,” she said.

However, the Biden school reopening policy has been overtaken by both controversy and events on the ground. Last month the administration had to walk back a statement from spokesperson Jen Psaki that reopening merely meant more than half of America’s schools being open for “at least one day a week.”

And in many parts of the country, public schools have had some form of in-person education for weeks, if not months. In New Hampshire, for example, Gov. Chris Sununu ordered all schools to offer in-school instruction at least two days a week beginning March 8.

“We are going to safely reopen our schools. We are going to get people back to work. We are going to lift up the families who are struggling just to get by, and we are going to be stronger than ever because that’s what the American Rescue Plan is all about. Help today so we can build back better tomorrow.” Biden said. 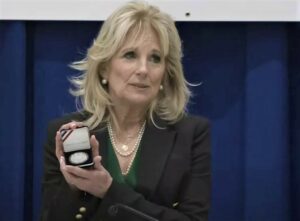 Dr. Jill Biden accepts one of the first Christa McAuliffe commemorative silver dollars, presented to her during a visit to Concord, NH.

The First Lady staked out a strong pro-reopen stance regarding public schools.

“When schools like Christa McAuliffe are open full-time, and childcare providers are safe and affordable, parents can focus on the careers they love and support their families. When our neighbors can stop worrying about how they can put food on their tables or keep their homes, they can invest in their communities.

“They can make towns and cities better for everyone,” Biden said.

Biden’s COVID package includes $128.5 billion in grants to elementary, middle and high schools — the largest one-time federal payout to public schools ever — to cover the costs of reopening during the pandemic. However, the Congressional Budget Office reports only $6.2 billion of those funds will be spent this school year. The rest of the funds will be set aside for use through 2028, presumably long after schools have reopened and the pandemic has ended.

“We will move quickly to get these vital resources to you,” Cardona wrote. “It is with this same sense of urgency that State educational agencies (SEAs) and school districts should plan to expend these funds to safely reopen schools as expeditiously as possible this spring.”

But as critics note, New Hampshire public schools are largely open already, and many local private schools have had classroom instruction since September.

“Instead of prioritizing education funding around every student’s needs, the latest spending bill perpetuates the broken top-down education system that had numerous gaps and challenges for educators and students well before the pandemic,” said Americans for Prosperity New Hampshire State Director Greg Moore. “We urge the administration to support efforts to make students, not systems, the main priority of our education system.”

“Rather than work in a bipartisan fashion to pass targeted relief for American workers and small business, as Republicans did four times last year, Joe Biden and Senate Democrats spent trillions of taxpayer dollars on a partisan, wasteful, liberal spending bill,” Scott said. “Now, they’re using their liberal payoffs to try to save the political careers of vulnerable Senate Democrats like Maggie Hassan in New Hampshire. The Democrats’ so-called ‘COVID relief’ is nothing more than a liberal wish list that spends trillions without prioritizing real help for American families fighting and recovering from this pandemic.”