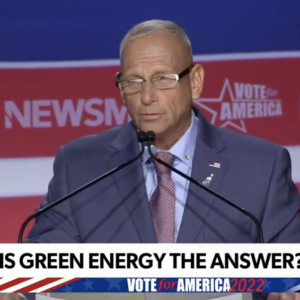 Fenton, Morse Mix It Up in Newsmax Debate

The U.S. Senate GOP primary debate at St. Anselm College Wednesday night hosted and broadcast by Newsmax had a glitzier stage and a bigger crowd than the previous encounters. But the content was very similar to the first debate of the campaign, hosted by NHJournal nearly two months ago.

(Vikram Mansharamani was excluded from the debate by Newsmax for not meeting its four percent polling threshold.)

The net result? Not much. Smith is still the best debater, Fenton is still a bitcoin firebrand, Morse is still uncomfortable with the format, and Bolduc is very likely still the frontrunner.

Interestingly, Bolduc was never mentioned by the rest of the field — other than a polite “thank you for your service” from Morse.

The debate covered familiar territory: The Mar-a-Lago raid, the Inflation Reduction Act, what to do about China, and Russia’s war against Ukraine. All of the candidates support expanded fossil fuel production to bring down prices and oppose giving $80 billion to the IRS in order to increase tax audits.

An even bigger misstep: None of the GOP candidates on stage seized an opportunity to hit Hassan over it.

Smith was, as in the past, the best debater. Unfortunately for him, winning debates is not the same as winning the election. The premise of his campaign was summed up in his closing remarks, urging Republican voters to think about who would be the best candidate to face off, “mano e mano” with Hassan in a general election debate.

“Kevin Smith’s campaign is starved of the resources needed for a sustained TV ad campaign, so he has to make the most of whatever free media he gets,” said Dante Scala, professor of political science at the University of New Hampshire. “To his credit, he did the best job tonight of articulating a policy message with some depth — as best one could under the constrictions of the rapid-fire format, which seemed intended for national viewers with short attention spans.”

But based on current polling, Smith has yet to break through. And GOP primary voters appear to be comfortable with Bolduc as their banner carrier, no matter how many times Gov. Chris Sununu attacks him as a “conspiracy theorist extremist.”  Bolduc was calm, cool, and collected, and used his military service as a touchstone on nearly every question.

If the polls are right and Bolduc was leading before the debate started, nothing happened on Newsmax to change that math.

“Don Bolduc speaks more to a vibe or a feeling, not a set of policy positions,” said Scala. “His long-running campaign has made him uniquely able to feel New Hampshire voters’ pain and outrage, he says. More than anyone else on stage, he acts like he’s by himself in this race.”

Meanwhile, the most interesting storyline of the night was the return of Fenton vs. Morse.

In a sign of how much the Republican Party’s base has evolved, hardcore libertarian Fenton condemned the war in Afghanistan after the 9/11 attack, offered an MSNBC-style denunciation of the invasion as a “war for Cheney and Haliburton” — and was cheered by the GOP crowd.

Soon after, Morse pivoted off an unrelated question to go back and attack Fenton for campaigning on behalf of Massachusetts liberal John Kerry during the 2004 campaign as part of his anti-war efforts. [The Fenton ad for Kerry is here.]

“In 2004, what Bruce did was he went against the Republican Party. He went up on the air with ads for John Kerry, to defend John Kerry’s position.”

Fenton didn’t back down. “I absolutely protested George Bush and the war. And that’s a perfect example of the difference between me and you,” Fenton told Morse. “I would’ve voted against that Afghanistan war. You would’ve voted for it. It was a mistake.”

“Chuck Morse debates on two levels,” said Scala. “When he’s discussing state policy, he speaks with the assurance that comes from a depth of knowledge and years of experience. But that local expertise makes his answers on national issues sound flat and one-dimensional in comparison.”

Another notable moment was when the candidates were asked if they would commit to supporting the GOP nominee against Hassan. Again Fenton was the outlier. “We’ll see,” he answered.

Morse again went on the attack. “This just proves that when Bruce went with John Kerry in 2004 and went against President Bush, that’s what’s wrong with his candidacy.”

“I won’t vote for tyrants, Chuck. And that includes you,” Fenton fired back.

Why was Chuck Morse, who many observers believe has the best chance of overtaking Don Bolduc, attacking the fringe libertarian polling in single digits? Why not take on Bolduc?

The same with Kevin Smith, who threw a couple of elbows at Morse but left Bolduc untouched?

It could be that they understand Bolduc’s voters are the ones likely to determine the outcome of this primary and they want to lure them away rather than rough up their current pick. They could be waiting for attack ads and media reports about Bolduc to do the heavy lifting for them.

That was the strategy Sen. Ted Cruz used against Donald Trump in the 2016 primary: Talk nice and wait for his candidacy to collapse.

Ask President Cruz how that worked out for him.