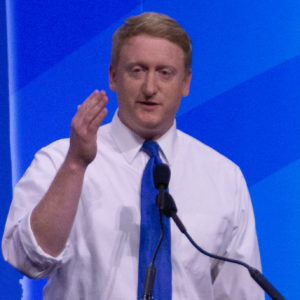 Execs Who Wrote Feltes’ Energy Plan Would Profit From It

But there’s no doubt who the big winners from Feltes’ plan are: Companies in the renewable energy business and the lawyers who represent them.

And why not? They wrote his plan.

Go to the Feltes for Governor website and you’ll find the link to his Green Jobs, Green Future proposal. Right across the bottom are the credits:

That’s one way to describe them.

Another is that Weeks is a co-owner and director of a company that sells the large-scale solar projects the Feltes energy plan promotes. King owns a series of hydropower plants and their electricity would increase in value under the Feltes’ green-energy mandate. And Birchard is an attorney with Keyes & Fox, a firm that specializes in representing renewable energy companies.

In short, Feltes’ energy plan was written almost entirely by people who would benefit directly from it. In fact, one of the co-authors predicts his business will double if these policies are enacted. And Feltes let them write it.

Asked about this possible conflict of interest, Feltes spokesperson Emma Sands told NHJournal: “Just like on his school reopening plan, and any piece of legislation, Senator Feltes worked together with advocates and experts on his clean energy plan, something Chris Sununu is incapable of.”

The proposal put together by Feltes and his energy advisors calls for “50% clean energy by 2030, 80% by 2040, and 100% by 2050.” Which means within 10 years of Feltes taking office, New Hampshire would need 300 percent more electricity from renewable sources.

And that doesn’t include the huge demands of moving the 55 percent of Granite Staters — who currently use home heating oil or propane — over to electric heat. Less than 2 percent of New Hampshire’s electricity is currently generated by wind or solar.

It all points toward a booming economic opportunity for Feltes’ advisers.

“Until last year, with the change in administration in Maine when Governor Mills took office, Maine had a governor actually quite similar to Governor Sununu. Governor LePage vetoed every bill to open up the clean energy market,” Weeks told NHJournal. “That created a really challenging market, similar to New Hampshire right now.”

But when Maine made the sorts of policy changes Weeks helped write into the Feltes plan, his commercial business doubled. Asked if he expected the same 100 percent business growth if New Hampshire enacted the same policies, he told NHJournal, “I would, I would.” 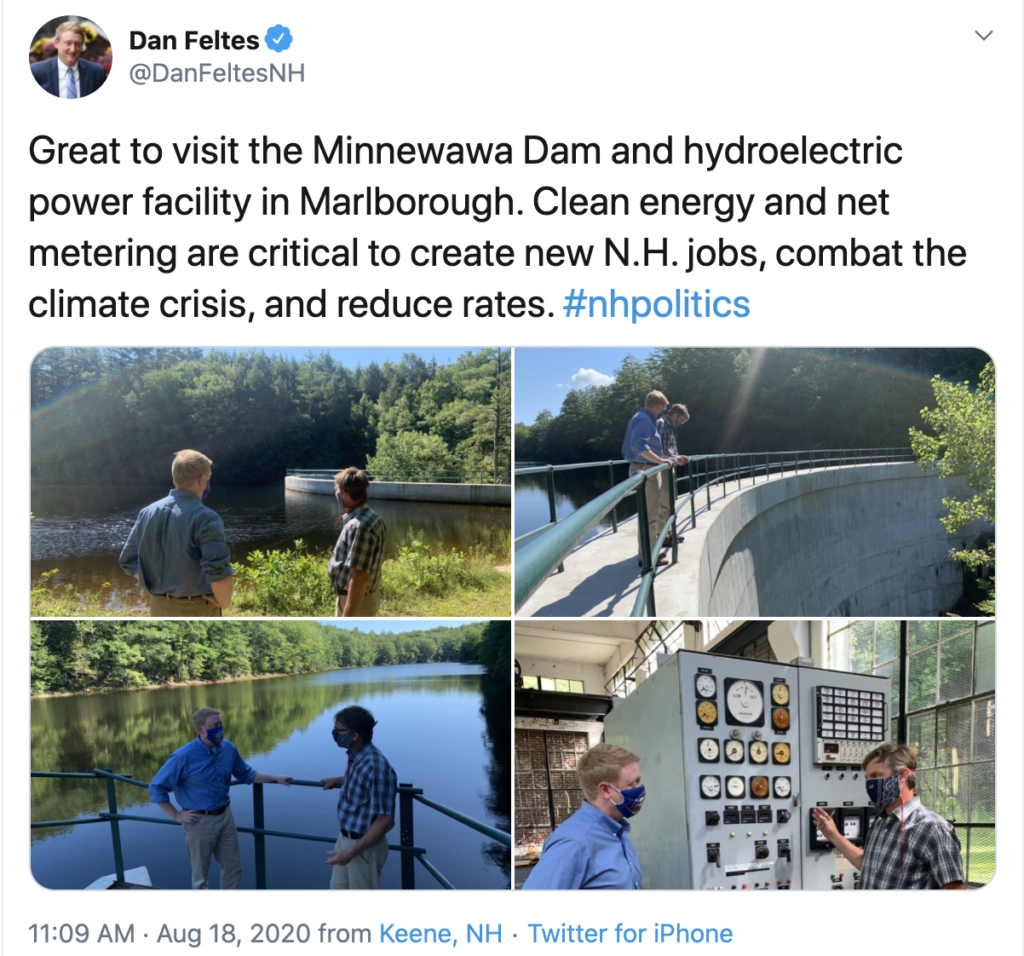 Another co-author is Bob King, president of Ashuelot River Hydro in Keene, N.H. and, according to his resume, “Founder, owner, financier, automation engineer for six hydroelectric projects in New England.”

Asked about the ethical issues raised by his role as both an energy executive and co-author of a candidate’s energy plan, Weeks acknowledged it’s a legitimate question.

“I certainly don’t hide the fact that I work in the industry, and I chose to work in it because my biggest mission in life is to make sure this planet is habitable for my kids, and the science says that’s in serious doubt if we don’t very rapidly transition.

“So yes, if these policy changes are made, ReVision will see significant growth,” Weeks said.

Weeks notes that ReVision is an employee-owned benefit company, which treats workers more generously than many traditional corporations. “It matters the way businesses operate and what the policies actually do for people in our world.”

Of course, business executives in many industries — pharmaceuticals, defense, natural gas, school privatization, etc. — believe their policies contribute to the greater good. It’s doubtful, however, that the Feltes campaign would accept this answer from Betsy DeVos or Dick Cheney.

“I think part of the concern for folks involved in good government issues is transparency,” Weeks said. “We know Gov. Sununu has raised substantial money through LLCs, which skirts finance limits. We know that Eversource has been his largest contributor. But what conversations happen around any of this legislation with Eversource is certainly unknown.”

“But I will stand by doing everything I can, inside politics and out, to make this transition [to green energy] happen.”

CORRECTION: An earlier version of this story referred to Dan Weeks as president of ReVision Energy. He is actually a co-owner and director. We regret the error.