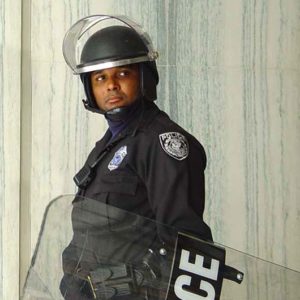 Our New Hampshire Bill of Rights in Article 8 reminds us that: “All power residing originally in, and being derived from, the people, all the magistrates and officers of government are their substitutes and agents, and at all times accountable to them.”

That is why New Hampshire has strong open records laws. However, police discipline files are exempt from public disclosure. They should not be. When officers are found to have violated law or policy, the public should have access to that information so that misconduct is not hidden from public view by privacy laws. Not only will this publicly expose incidents of misconduct, but it will provide a powerful incentive for officers to behave properly.

2. Outlaw chokeholds or neck compression, regardless of the circumstances.

Officers have tasers, guns, batons and handcuffs, so suffocating someone should not be in their toolbox. The suspect should be alive for trial, not executed without one by a single government employee. A suspect who gets away can be arrested later rather than being killed for a pack of stolen cigarettes or some other misdemeanor.

While physical force may be necessary in some circumstances, choking or otherwise impairing breathing is not an acceptable tactic. This is especially important when suspects may be confronted by police over minor transgressions, as has been the case with several high-profile deaths at the hands of police. Our Police Standards and Training Council, which trains and certifies both full- and part-time police, should ban use of neck restraints, as should every police department.

When asked, the PSTC and police departments say they don’t “teach” neck restraints. But that is not the same as teaching not to ever use them. The current exception for their use if “justified” or “authorized” in deadly force cases places officers in difficult circumstances that require split-second judgment and runs the risk of misuse.

“No” should mean “no,” not “maybe, in mortal self-defense.” This is not a controversial proposal. More than two thirds (68 percent) of the public supports the ban on strangleholds, according to a June poll by the Kaiser Family Foundation.

Another change the Kaiser Family Foundation found widely supported, at 89 percent, is to require police to give a verbal warning before shooting at a civilian. The best evidence a warning was given would come from a body camera with audio.

If all uniformed officers wore body cameras, and kept them on during interactions with the public, debates over what happened at a crime scene would be much shorter. Officers who fail to activate them should face discipline for not doing so. The technology exists and is affordable. The debate about body cameras should long be over by now.

Police misconduct flourishes in a culture of silence. Department culture too often encourages officers to look the other way. That has to change. A good start is to require that officers who witness misconduct intervene to stop it, then report it. Any officer who witnesses misconduct and fails to intervene and report should be just as liable as the offender for discipline.

This proposal is almost universally favored, with 95 percent of the public polled wanting to require police to intervene, stop, and report excessive force used by other officers, again according to Kaiser polling. Nothing else polled so overwhelmingly.

New Hampshire’s public school educator code of conduct requires all credentialed educators to report misconduct if they witness it. Principals are required to deliver those reports to superintendents. Police should be held to even higher standards. In other places, they are.

After Hurricane Katrina exposed appalling behavior by some New Orleans officers, including the killing of unarmed civilians, the police department there created a new training program called EPIC (Ethical Policing Is Courageous). Under the program, officers are trained to respond calmly to civilian provocations and to intervene if they witness fellow officers using excessive force.

City officials have credited the program with changing the culture in the department and with a subsequent reduction in civilian complaints against officers.

5. Improve screening and treatment for PTSD.

Police work is highly stressful and requires the use of force. But departments do not always screen effectively for post-traumatic stress disorder (PTSD) or prepare their officers to deal with it. Passing a psychological test is a standard requirement for police applicants. For veterans, there is another tool available, which often goes overlooked.

Hiring departments should not ask to see only a veteran’s DD214 discharge from the service; they also should get a release of information for Veterans Administration files. Those files could help identify applicants who are unfit for police work. A diagnosis of PTSD should not, in itself, be disqualifying. It is manageable with the correct diagnosis and treatment.

The files can identify applicants with untreated PTSD or more serious psychological issues that could lead to lives lost in a confrontational situation. For all officers, departments should review their practices and procedures to see that effective training and treatment are available for any who exhibit symptoms of PTSD.

For their own protection, police officers are trained to be assertive and commanding. This is necessary training, but it can escalate tensions in many situations, which is why civil rights activists have called for the adoption of de-escalation training for years. Videos of police misconduct during recent protests shows there is a need for such training.

But what does “de-escalation training” mean? A study published this January in Criminology and Public Policy examined 40 years’ worth of de-escalation training reviews and concluded that modest gains were apparent, but most studies were of questionable quality. A study published last September on crisis intervention team training showed positive effects for officers but little effect on arrests, injuries or use of force.

George Floyd was killed by a  Minneapolis police officer three years after Minnesota mandated that every officer in the state receive de-escalation training. These mixed results, however, do not mean that such training should not be pursued. A problem identified by several studies is that there is no single definition of “de-escalation” training, and no consensus on what types work and what types do not.

It is clear that better training is needed and that some of the training being pursued is ineffective. Some retraining that is effective might not be classified as “de-escalation” training, though it has that effect. Among the sweeping reforms that transformed the Camden, N.J., police department were directives from the chief for officers to develop relationships with neighborhood residents and for the department to prioritize complaints from angry citizens. Such actions can reduce the level of confrontation when police are active in a community.

New Hampshire’s Police Standards and Training Council should pursue a comprehensive review of de-escalation training practices to identify methods that work. It should then incorporate those into its required training for both officers and chiefs of police.

7. Adopt better use-of-force policies that require force to be reasonable, necessary and proportionate to the crime and circumstances.

Several years ago, Camden, N.J., had a corrupt and incompetent police department. In the early 1990s,
there reportedly were 175 open-air drug markets in Camden. The city fired all its officers, broke its police union, hired a larger force, and for the last seven years has undertaken far-reaching reforms. Homicides in this poor, minority-majority city have declined from 67 in 2012 to 25 last year.

Among the many reforms, Camden adopted an 18-page use of force policy developed with New York University’s Policing Project. It lays out specific details rather than just saying “use reasonable force.” In Camden, any use of force must be reasonable and necessary but also proportionate to the crime and circumstances.

Sleeping in a car at a Wendy’s drive-up window would not be a violation that any officer could claim justified the use of deadly force, as occurred in Atlanta to Rayshard Brooks on June 13. The use-of-force training helps explain why reports of excessive force in Camden are down 95 percent in six years, though police, to maintain civil order, are writing more tickets and issuing more citations for low-level violations.

One of the reasons garage-door closing mechanisms no longer kill infants, and power lawnmowers shut off if you
let go of them, is that lawsuits made manufacturers accountable to those who were killed or injured. Holding police accountable if they use excessive force is just as important. And the mechanism is the same: a civil lawsuit.

Yet our courts have created various “immunities” to prevent jurors from doing justice when police are involved. Under the law, except in the most extreme cases, officers are always indemnified by state and local governments if they are sued civilly for violating the Bill of Rights or using excessive force.

The federal judiciary has created a “qualified immunity” doctrine not found in the Civil Rights Act of 1871. In 2007, the New Hampshire Supreme Court created “official immunity” for lawsuits against the police. Its goal was to “protect public officials from the fear of personal liability,” Everitt v. General Electric Co., 156 N.H.
202 (2007).

But if the police are indemnified, there can be no fear of personal liability. State law in RSA 31:106 provides that any expense, including attorney’s fees and costs, in a civil rights suit against municipal employees is covered unless the employee acted “with malice.” Likewise, state police or prison guards are protected under RSA 99-D unless they were “wanton or reckless.”

No official or qualified immunity from lawsuit should ever apply in those cases where the officer is indemnified. The officer’s house and assets are not put at risk when the state treasury or insurers are paying to compensate a dead or injured citizen.

The legislature should act to end official immunity by amending the law as follows: Add new section RSA 507-B:2-c: A governmental unit and its employees may be held liable for damages in an action to recover for bodily injury, personal injury or property damage caused by excessive force or violation of state or federal rights, provided that the acts complained of were within the scope of official duties of the employee and the employee is indemnified for damages arising out of a suit.

This is another change that has broad public support. Two-thirds of Americans in a recent Pew survey said civilians should have the power to sue police for excessive use of force. Why should an individual or family not be compensated by the government whose employee engaged in misconduct?

Conclusion: The eight reforms listed here would reduce the improper use of force by police officers and make officers and departments alike more accountable to the public. Each in its own way would increase trust and accountability by improving the police department culture.

This is not a comprehensive list of reforms. Rather, it offers a set of proposals that would generate powerful results in a relatively short period of time.

Granite Staters who cherish individual liberty and government accountability should find these proposals appealing, regardless of their partisan leanings.

This article originally appeared on the website of the Josiah Bartlett Center for Public Policy. It is published here with their permission.

By Michael Graham on December 04, 2022
Whatever the presidential primary calendar is in 2024, it absolutely will not be the one…
Read More
News