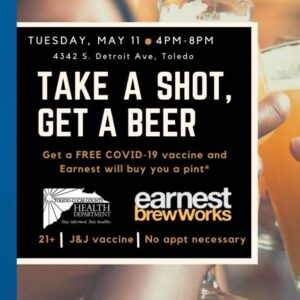 CLINE: How Better Vaccine Incentives Can Help Shorten the Pandemic

In late April, New Hampshire was No. 1 in the nation in the percentage of distributed vaccines administered. Nearing mid-May, the state has dropped to 23rd (80.91%).

As those who were most eager to get vaccinated have done so, the number of people signing up for their first dose has fallen sharply. Though the state reports that 62.6% of the population has received at least one dose as of May 3, only 26.3% have been fully vaccinated.

This slowdown in vaccine demand creates a public health concern because it threatens to prolong the spread of the pandemic.

The state has been encouraging people to get vaccinated for months. It has initiated a public awareness campaign with the message that getting vaccinated protects you and others. This has been the standard public messaging for COVID-19 vaccination campaigns. But recent research suggests that it’s not very effective at convincing those who remain reluctant to get vaccinated.

A recent YouGov poll found that 63% of Americans who do not plan to get vaccinated think it’s safe to gather indoors with other unvaccinated people without wearing a mask. A campaign that focuses on telling people they and their loved ones will be safer if vaccinated won’t resonate with unvaccinated people who already think they’re safe.

Shift to incentives and a positive message

A better vaccination campaign would offer a combination of fun incentives and positive messages.

A UCLA study found that people respond to cash and lifestyle incentives. Offering between $25-$100 raised people’s willingness to get the vaccine by between 13-19%. Cash was more effective with Democrats than Republicans.

Telling people that they won’t have to wear a mask after they get vaccinated also was effective at changing minds. For all respondents, the percentage who said they were more likely to get a vaccine rose by 13 points, from 50% to 63%. For Republicans, the gain was 18 points, from 35% to 53%.

The mask messaging is important. Requiring people to continue masking in public after vaccination undermines the government’s message that vaccination will make them safer and bring a return to pre-pandemic life.

This confusing messaging is prevalent in New Hampshire. Dover, which has a public mask mandate, tells residents that they must continue masking after getting vaccinated.

“WILL I BE ABLE TO STOP WEARING A MASK AND SOCIAL DISTANCING IF I GET THE VACCINE?

Portsmouth and Nashua are among the New Hampshire municipalities that continue to mandate mask-wearing in public, including outdoors, which undercuts the state’s vaccine messaging.

Instead of communicating the depressing, negative message that vaccination offers no escape from mask mandates and other government controls, the government ought to be sending a message of hope and joy while offering people fun incentives to get the shot.

Yes, the caveat is that businesses, local governments and other organizations might continue to require masks indoors for the time being. But governments aren’t effectively communicating that this should be a temporary, transitional practice rather than a permanent one.

A few jurisdictions, however, have tried creative, incentive-based initiatives to encourage vaccination, and the results are encouraging.

An Erie County, N.Y., program that offered free local craft beer and a pint glass to those who showed up to get vaccinated at a local brewery resulted in more vaccinations in one day than all of the county’s first-dose clinics for the previous week, The Buffalo News reported.

New Jersey is partnering with the Brewers Guild of New Jersey to provide a free beer for anyone who gets vaccinated in May.

There is good evidence that unvaccinated people respond more to incentives such as free cash and beer — and the lifting of mask requirements — than to New Hampshire’s current messaging. The state could produce better results by changing its vaccine marketing as soon as possible to do the following:

The state has both a public health and an economic interest in bringing the vaccination rate up to the highest possible level. Giveaways and better messaging won’t convince everyone to get a vaccine, but there is evidence that they can produce a large enough change on the margins to make a significant difference. Available evidence suggests that this would be more effective than the standard messaging being used by New Hampshire and most other states.