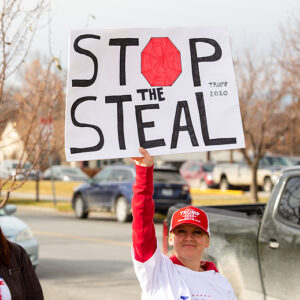 Kuster Quiet, Pappas a ‘No’ on Dem Plan to Take Iowa House Seat From GOP

Partisan members of Congress insisting –despite the evidence — that an election was wrongly decided. Dismissing arguments that the results have been certified by the state, they demand an investigation with the hopes of unseating the winner and picking up a win for their party.

November’s race for Iowa’s Second Congressional District was one of the closest in history, with Republican Marianette Miller-Meeks defeating Democrat Rita Hart by just six votes out of more than 400,000 cast. The results went through mandatory recounts and review and, eventually a five-member bipartisan review board. The three Republicans and two Democrats certified the results and Rep. Miller-Meeks was seated as a duly elected member of Congress.

But for Democrats, the vote counting may just be beginning.

“Democrats are dead serious about taking back that Iowa seat,” wrote Politico on Monday, laying out the Democrats’ strategy to overturn the election and add to their narrow, five-vote majority. Politico reports “the effort to oust Miller-Meeks in favor of Hart has been blessed by the top echelons of House Democratic leadership.”

But to succeed, they will likely need the support of virtually every Democrat in Congress, including New Hampshire Reps. Annie Kuster and Chris Pappas. And that’s a problem. Late Monday night, Pappas told Fox News he didn’t support the House leadership’s efforts

“This election result was certified by the State of Iowa and Rep. Miller-Meeks was sworn in nearly three months ago,” he said. “As I said when Republicans challenged the Electoral College votes on January 6th, the election is over and it’s time to move on.”

That may be enough to kill the Democrats’ plans. Why? Any move to reverse a congressional election — for just the fourth time since 1789 — must go to the House floor. It starts in the House Administration Committee, led by Democrat Rep. Zoe Lofgren (D-Calif.), which is currently considering opening an investigation. That could take weeks or even months. If Democrats decide they want the seat badly enough, they’ve got a 6-3 committee majority to send it to the House floor.

That’s where the Democrats’ slim majority makes things tricky. Assuming the GOP would be united in opposition — indeed, they would likely be more united than ever in reaction to this effort to unseat one of their members — Democrats would need virtually every vote to succeed.

Rep. Kuster declined to commit to defending the results of the Iowa election in response to repeated inquiries from NHJournal.

“Losing a House election by six votes is painful for Democrats. But overturning it in the House would be even more painful for America. Just because a majority can, does not mean a majority should.” Phillips tweeted Monday morning.

“Absent overwhelming evidence, it would be insane to overturn the results of the Iowa election,” an unnamed House Democrat told Politico. “It would be wrong on principle. It would also be political malpractice. While we would gain one seat, we would lose a lot more next year.”

If Pelosi presses ahead, it won’t be the first time Democrat majority has attempted to overturn state-certified election results they didn’t like.

Initially, McCloskey won the race by 72 votes. But a month later a tabulation error was discovered, which put McIntyre in the lead by 34 votes. The state of Indiana certified the results with McIntyre as the winner, and the House Democrat majority refused to seat McIntyre.

A recount was conducted, which then had McIntyre in the lead by 418 votes, and again the state certified the election with McIntyre as the winner.

House Democrats once again refused to seat him.

Despite the state of Indiana certifying McIntyre’s win twice, the Democratic majority went forward with its own controversial recount that found McCloskey won by just four votes.

The full House of Representatives then voted on the election results, with 10 Democrats agreeing with Republicans that McIntyre won the election. Despite the show of bipartisanship, it wasn’t enough to overturn the will of a nearly 75-seat Democrat majority and McCloskey was seated.

Republicans fear a repeat. They note Hart refused to take her case to court as is usually done in cases like these, in order to avoid an almost certain defeat.

“All the legal ballots were counted and at every juncture, I was ahead,” Miller-Meeks said in a recent interview. “Democrats want to take this to a partisan political process because ‘might makes right.’”